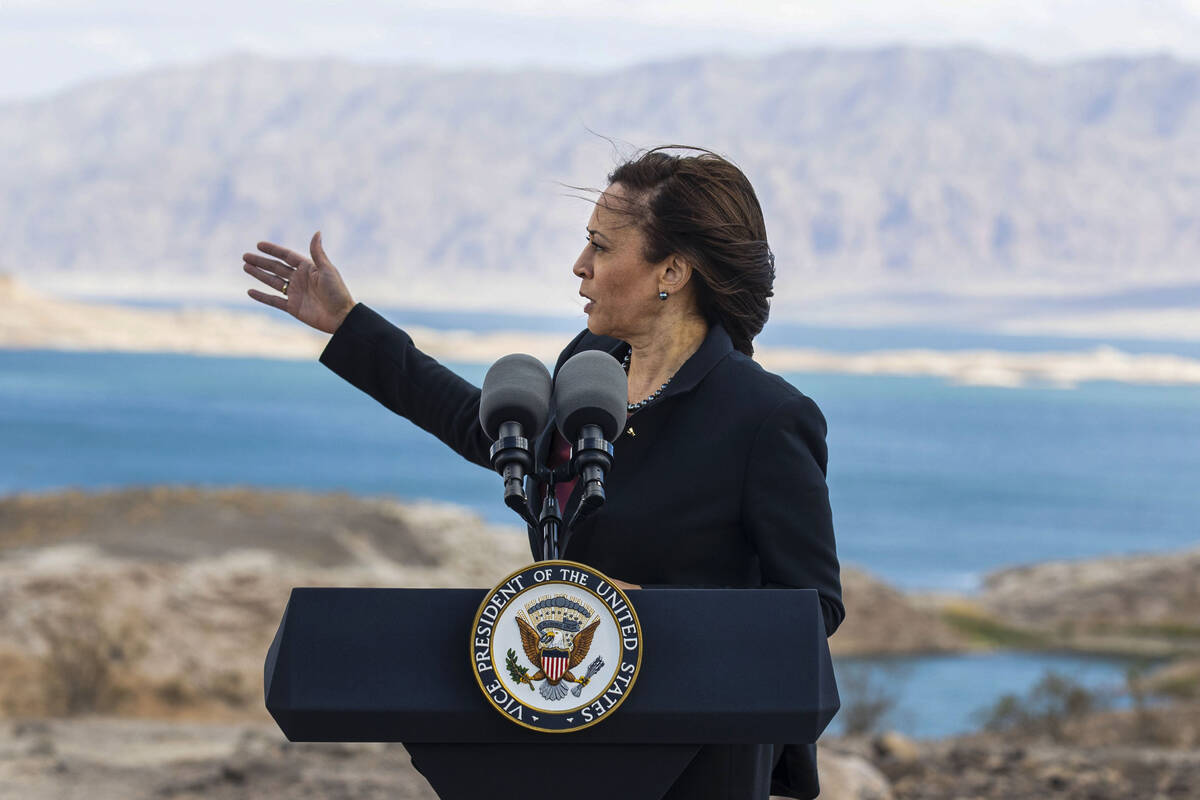 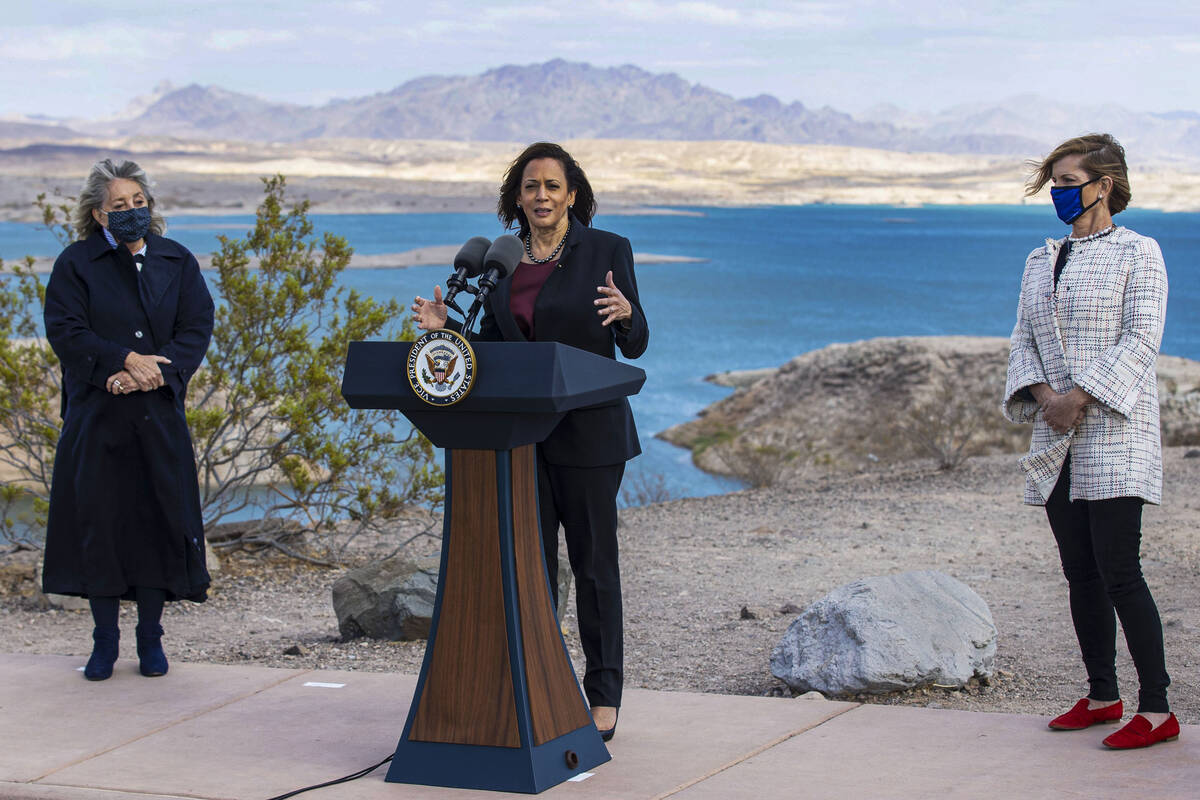 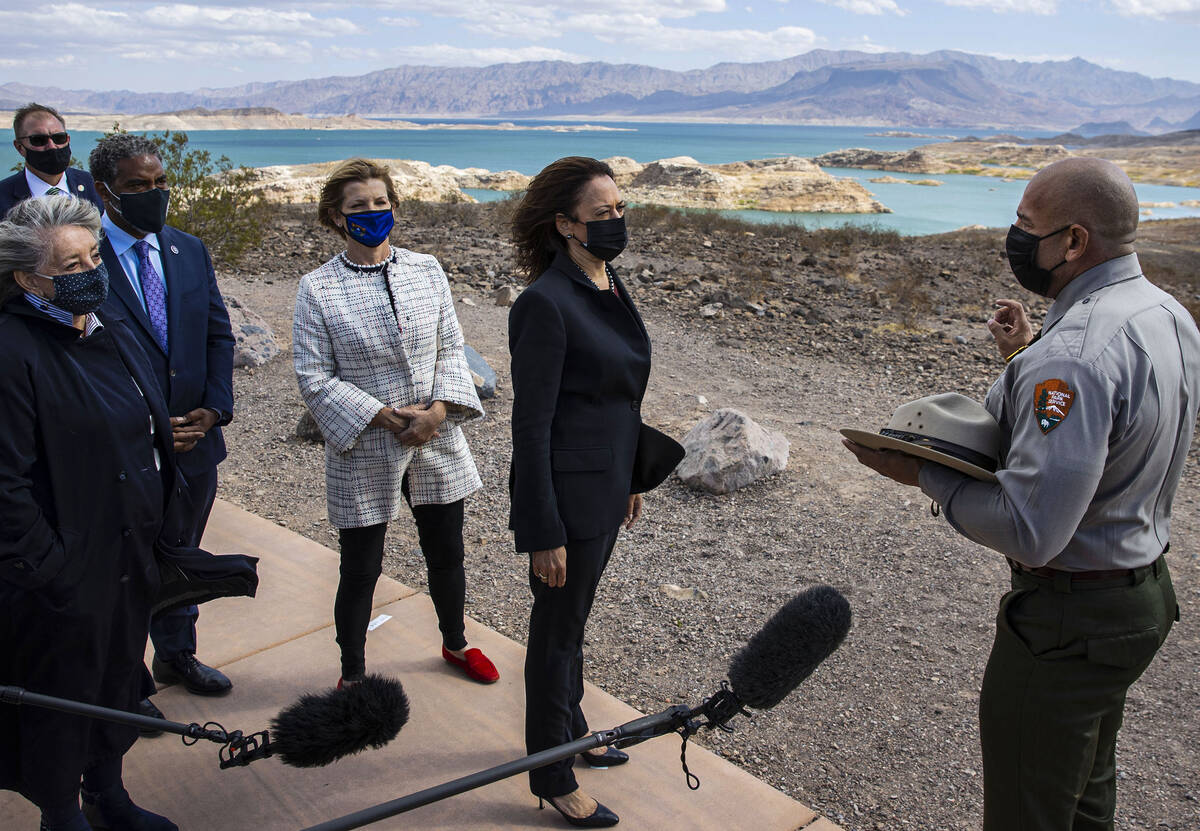 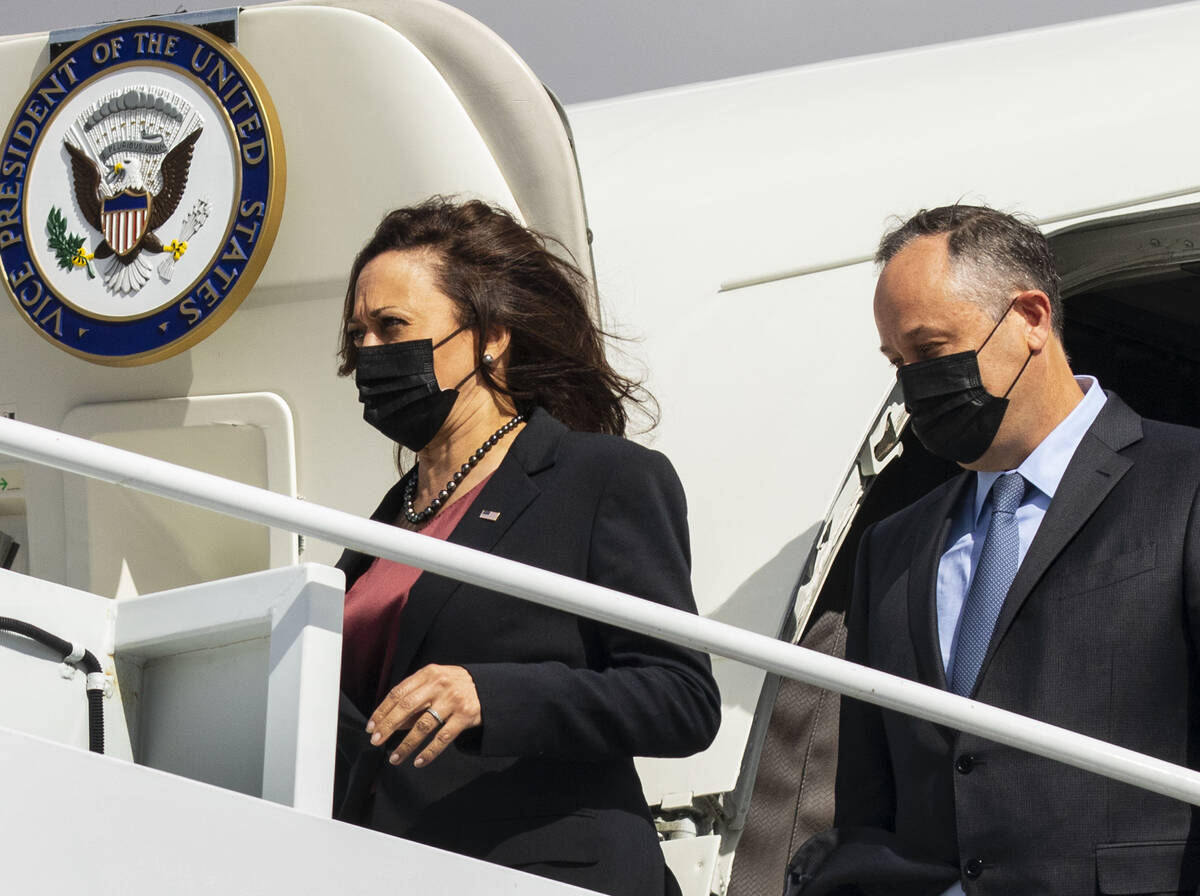 Flanked by Democratic members of Nevada’s congressional delegation, Harris urged lawmakers to pass a pair of bills that she said could reduce emissions, create jobs and benefit future generations.

“And it is critical that we as a nation understand that we have within our hands, within our possession, the ability to actually change the course of where we’re headed,” she told reporters on a Lake Mead overlook. “Just look out at this lake. … This is where we’re headed.”

Over the past 20 years, Lake Mead’s water level has declined by about 150 feet amid climate change-fueled drought conditions. In August, the federal government declared a water shortage for the reservoir, a move that will force Nevada to slash its allocation of water from the Colorado River next year.

A $1.2 trillion infrastructure package includes more than $8 billion for Western water projects and programs, but is stalled in the House as Democrats debate the details of a larger social spending package.

The infrastructure package received 19 Republican votes in the Senate, but the larger Build Back Better legislation has faced opposition from Republicans and two moderate Democratic senators, Joe Manchin of West Virginia and Kyrsten Sinema of Arizona.

Climate provisions of the Build Back Better bill hit a snag last week when Manchin signaled opposition to a major component that would drive down greenhouse gas emissions by rewarding utilities that use clean energy and punishing those that don’t, the New York Times reported.

House and Senate leaders continue to negotiate with the White House on a final deal for the Build Back Better plan that can make it to President Joe Biden’s desk.

Harris, who Monday afternoon touted the bill’s investments in electric vehicles and clean energy, did not take questions from reporters after delivering her remarks.

Reducing greenhouse gas emissions is critical to the future of drought in the Southwest. Last month, a National Oceanic and Atmospheric Administration report said measures to combat climate change must be taken or else the atmospheric conditions that have worsened a recently studied period of drought will be more common in the future.

Two decades of drought have parched the Colorado River, the source of about 90 percent of Southern Nevada’s water. The drought has been driven by decreased rainfall and hotter temperatures.

During her visit, Harris met with officials from the U.S. Bureau of Reclamation, Southern Nevada Water Authority and National Park Service to learn more about the drought and what steps the region is taking to address it.

She was joined by Democratic U.S. Reps. Dina Titus, Susie Lee and Steven Horsford, all of whom support the Biden proposals.

The infrastructure bill that is stalled on the Hill contains numerous drought-fighting measures, including a competitive grant program for large-scale water recycling projects.

That program could help pay for a massive water recycling project in Southern California that would allow officials there to inject treated water into the ground for later use. In exchange for helping to pay for that project, Southern Nevada would get access to some of California’s water in Lake Mead.

“The last thing Nevadans want is for this administration to get involved with our water crisis,” newly re-elected Nevada Republican Party Chairman Michael McDonald said in a statement.

“Whether it’s the border, Afghanistan, or the economy, everything the president and vice president touch turns to ash. Nevada already has the highest unemployment in the country and families are being hurt by inflation every time they reach for their wallet because of this administration, and the ‘Build Back Broke’ agenda will make these problems even worse.”