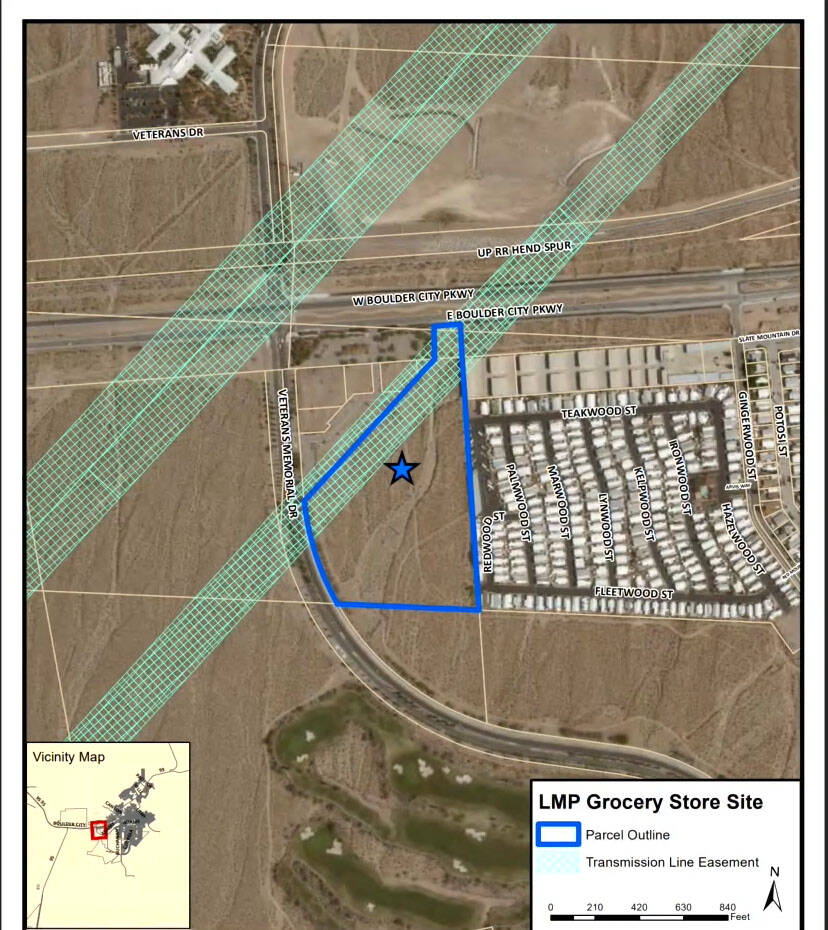 Photo courtesy Boulder City Voters will be asked if the city can sell 16.3 acres of land specifically for a grocery store and related retail outlets when they head to the polls in November. The parcel is southeast of Boulder City Parkway and Veterans Memorial Drive.

Boulder City voters will be asked to weigh in on selling land for a grocery store, designating funds for public safety facilities and if clean-energy technologies should be allowed in the Eldorado Valley when they head to the polls in November.

The city charter prevents officials from selling parcels of land one acre or larger without voter approval. The parcel proposed for this sale is southeast of Boulder City Parkway and Veterans Memorial Drive.

If approved and the land is sold, a deed restriction will be placed on the parcel limiting its development primarily for a grocery store.

Approving the ballot question will not guarantee sale of the land or construction of a second grocery store in the community. Nor have any grocers expressed interest in developing the property.

Despite the city placing the question on the ballot, support is scant. Planning commissioners voted 4-1 Aug. 17 not to recommend that the City Council change the town’s future land use map and zone the parcel specifically for a grocery store. Planners expressed concerns about the deed restrictions.

The second ballot question asks if the city should spend as much as $7 million for improvements to public safety facilities, including construction of a new police station and training area at the fire station.

Money for the projects would come from the city’s capital improvement fund, which receives revenue from property transactions such as solar leases.

This question does not impact the proposed new fire substation, which was approved by City Council in July. Money for its construction is part of the $1.9 million from the American Rescue Plan Act allocated for public safety facilities.

The third question asks if the city should allow clean-energy technologies, such as battery energy storage, carbon capture and clean hydrogen, to join the two natural gas generation facilities in or proposed in existing leases within the Eldorado Valley outside of the multispecies habitat conservation easement.

When the land was acquired by the city in 1995, there was an agreement that it would be used only for and limited to public recreation, as a desert tortoise preserve, solar energy facilities, utility lines, easements, roads, and communication towers and antennas. In 2007, voters approved allowing geothermal energy exploration, research, development and production.

Natural gas production is not included as a permitted use, but existing leases and lease options for natural gas facilities were grandfathered into the agreement.

Currently, the city leases land to one natural gas facility and a proposed natural gas “peaker” facility. These bring in approximately $1.27 million annually in revenue.

When the leases expire, these facilities will not be allowed to continue operating without voter approval, which is part of what is being asked in this question. If approved, it also would allow clean-energy technologies in the area.

None of the three questions would require levying or imposing any new taxes or fees or raising existing taxes or fees.

Additional information can be found at https://www.bcnv.org/193/Current-Ballot-Questions.