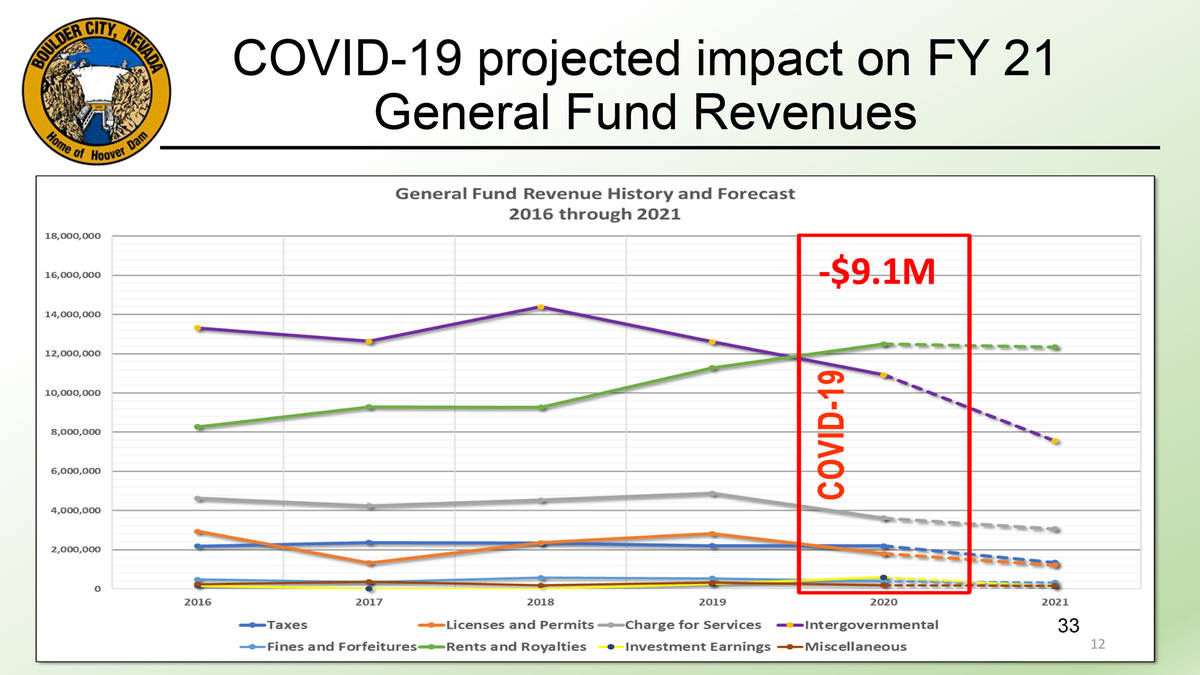 Boulder City City staff is estimating a $9.1 million loss in revenues for the 2021 fiscal year due to the COVID-19 pandemic.

Boulder City is facing an estimated $9.1 million revenue loss for the 2021 fiscal year budget because of the COVID-19 pandemic and staff is suggesting to use almost $4 million from reserves to help balance and offset those losses.

This city’s budget for the 2020 fiscal year that ends June 30 also will be affected.

“Just like every family in Nevada has had to re-examine their budgets, cities have had to do the same. … Staff will be working diligently to minimize the impacts to the service levels we provide to our residents, businesses and visitors,” said City Manager Al Noyola.

City Council held a special meeting Wednesday, April 22, morning to discuss the budget. It was still in session at the Boulder City Review’s deadline for this week’s issue.

“Due to the governor’s directives on schools, recreational activities and gatherings, most of the city’s part-time staff have not been working,” said Finance Director Diane Pelletier. “We adjusted spending and expenses, such as training and travel. Vacant positions will likely remain frozen until fiscal year ’22. All purchases must be approved through our purchasing manager to ensure we are getting the most basic yet economical items.”

According to Pelletier, the general fund for the 2020 fiscal year is estimated to have a $1.5 million shortfall. Two of the funds most affected by it are More Cops and Crime Prevention.

The utility and airport funds for this fiscal year will be OK, she added.

For the 2021 fiscal year, Pelletier said a 40 percent drop is expected in all the city’s revenue streams except the solar leases. That revenue is expected to remain the same. The drop represents approximately $9 million in lost revenue for the general fund.

According to a financial plan presented to council, staff is proposing to cut individual departments’ budgets, continue a hiring freeze and use almost $4 million from reserves to balance the budget.

Staff is also working to utilize special revenue funds allowed by the state as well as researching and applying for emergency funding available from the United States Congress.

Pelletier said she said estimates the city will be on its way “to getting back to normal” by the fiscal year 2022.

BC Budget Update by Boulder City Review on Scribd