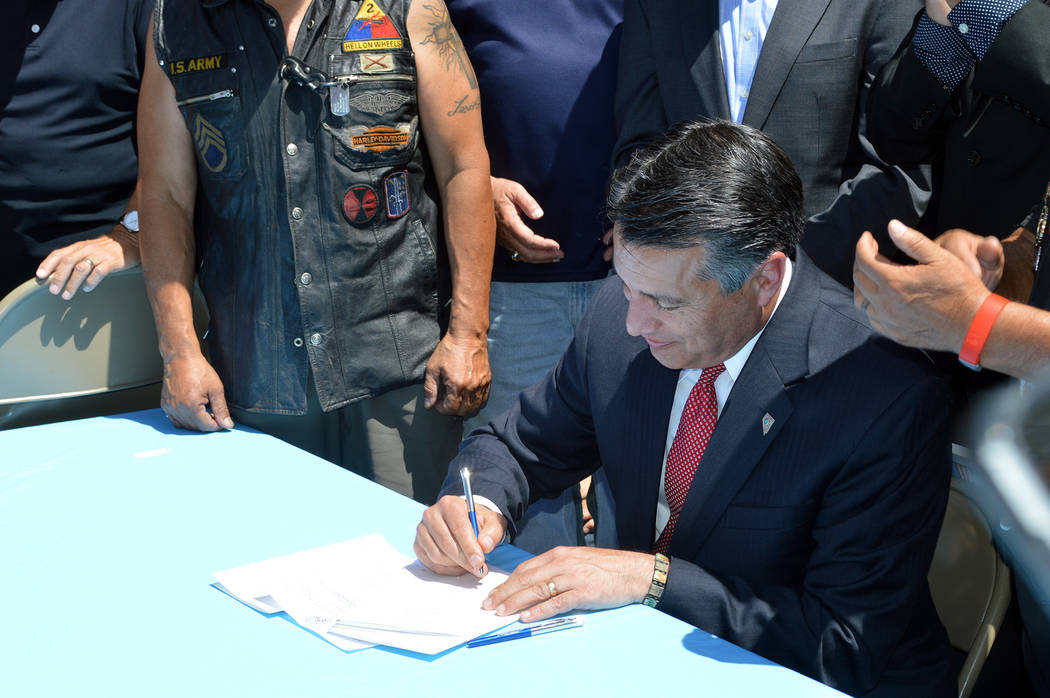 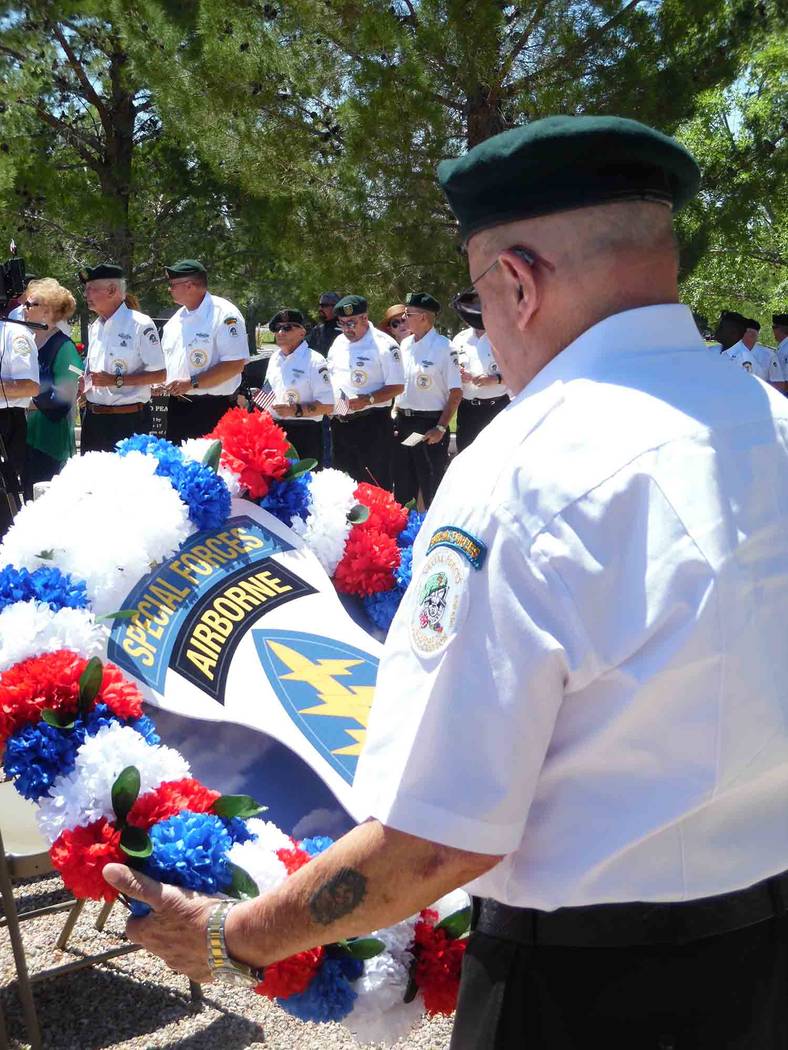 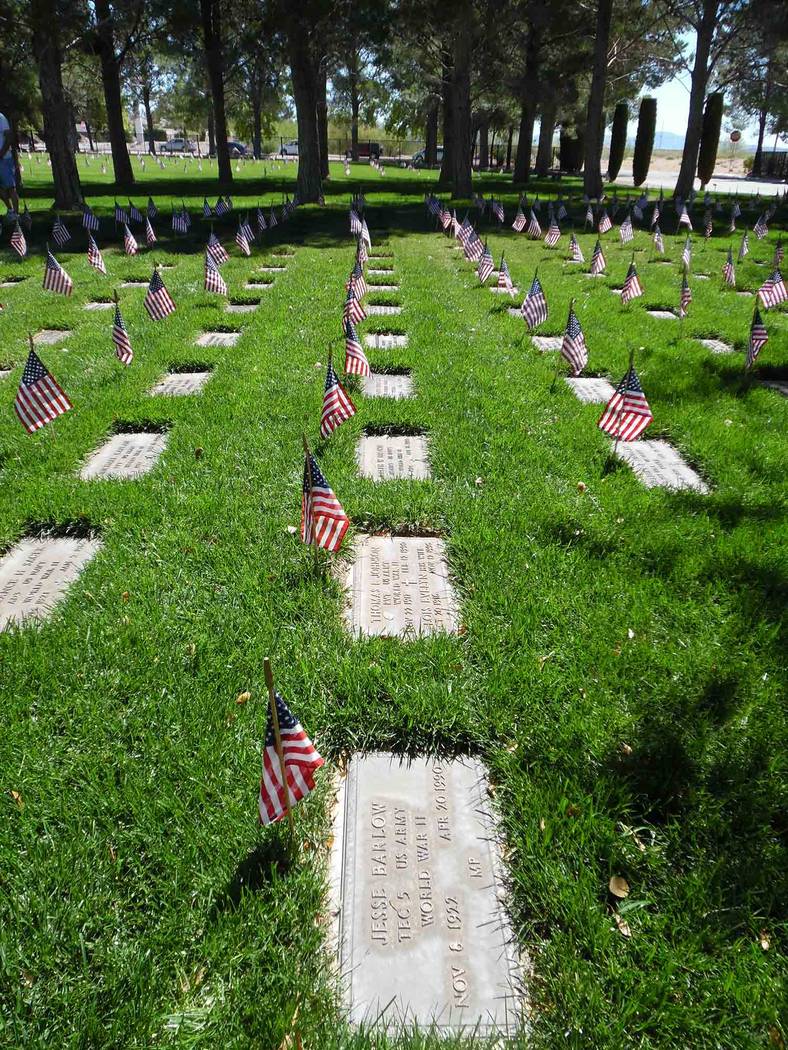 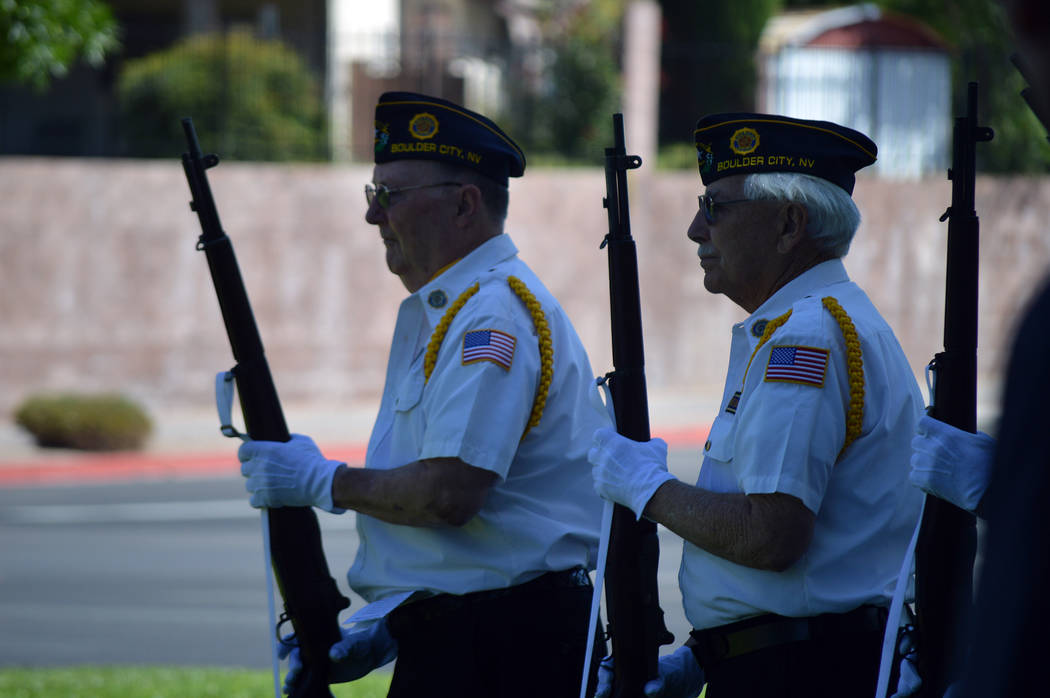 Celia Shortt Goodyear/Boulder City Review Members of an honor guide pay tribute to those who died and served their country at the American Legion's Memorial Day ceremony on Monday. 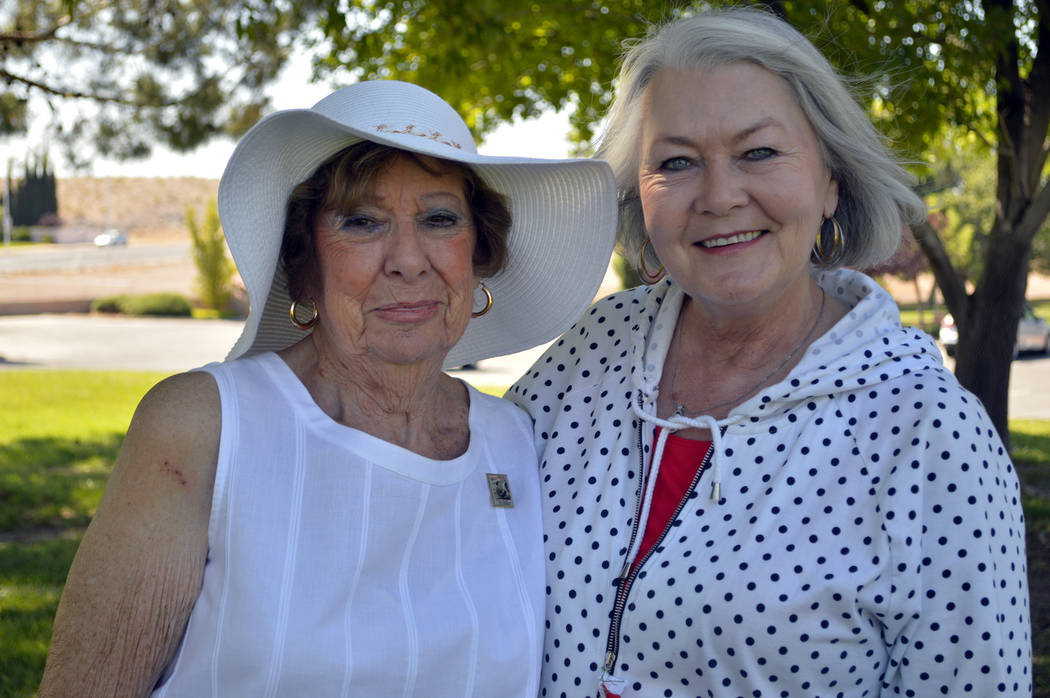 Celia Shortt Goodyear/Boulder City Review World War II veteran Gloria Saucier, left, spoke about the importance of remembering veterans at the Memorial Day ceremony at the Boulder City Cemetery. Dawn Walker of the American Legion asked Saucier to speak at the event and met her through Honor Flight Southern Nevada. 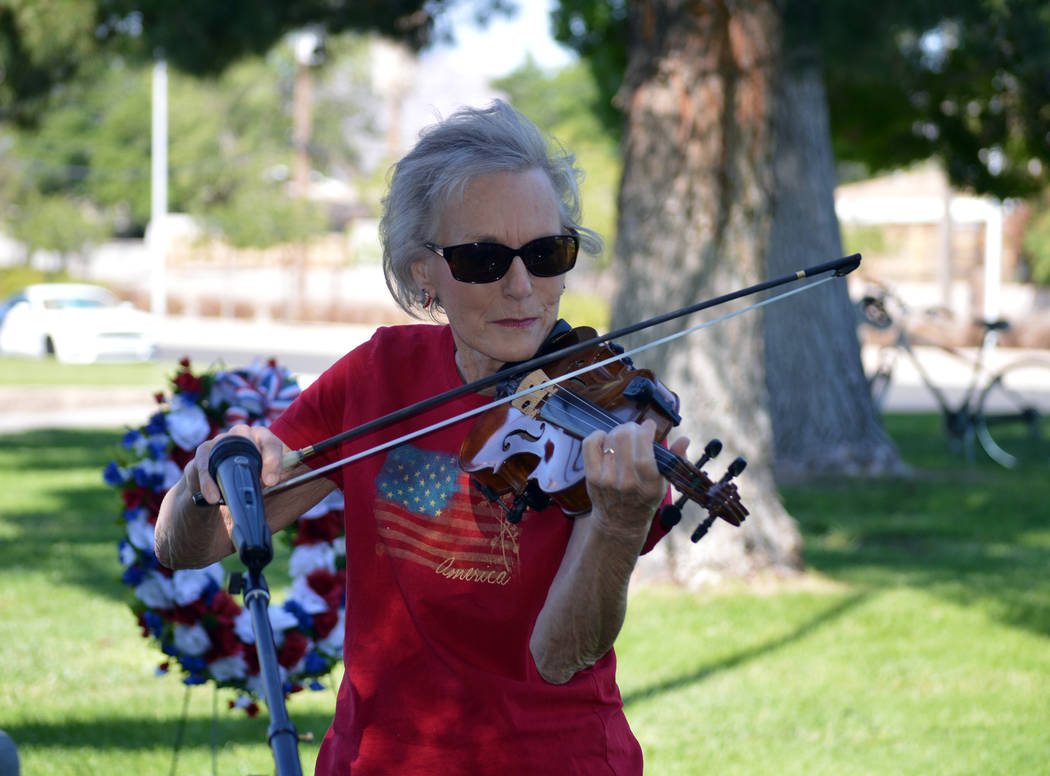 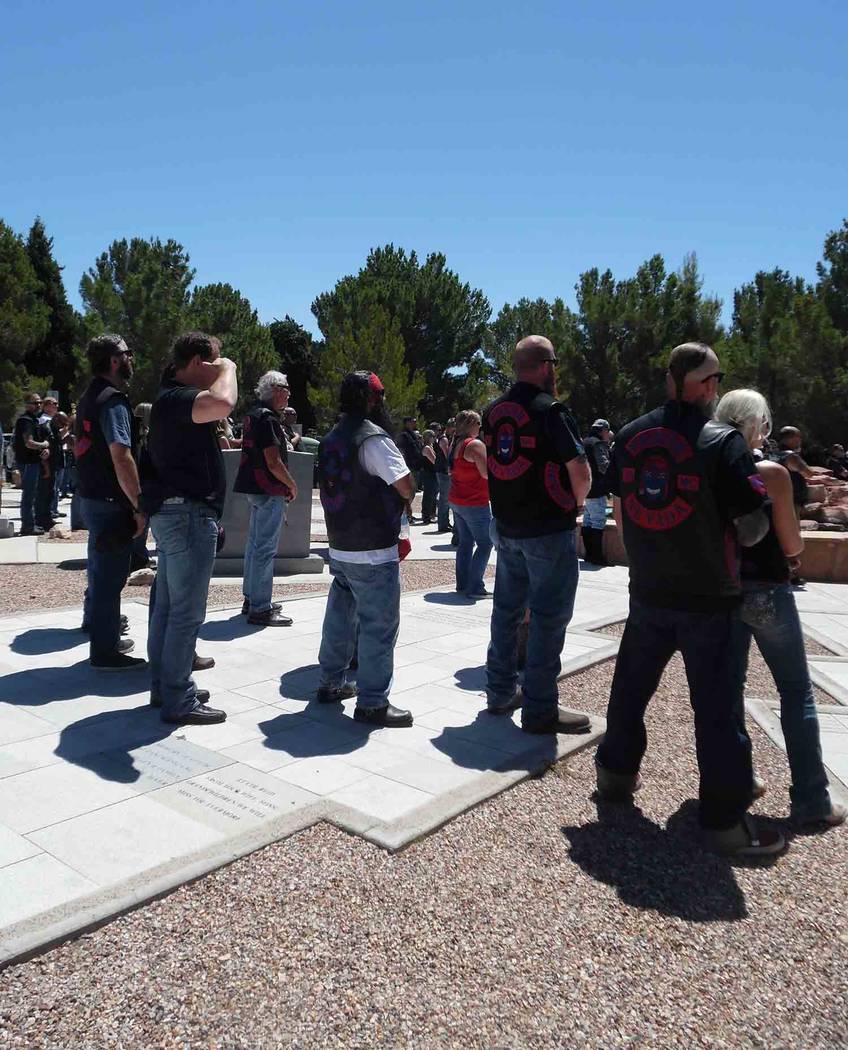 Hali Bernstein Saylor/Boulder City Review About 1,700 motorcycles participated in the 23 annual Fly Your Flags Over the Dam Run presented by the Vietnam Vets-Legacy Vets Motorcycle Club. The Sunday run ended at the Southern Nevada Veterans Memorial Cemetery, where a service, co-hosted by the Special Forces Association, Chapter 51, was held. 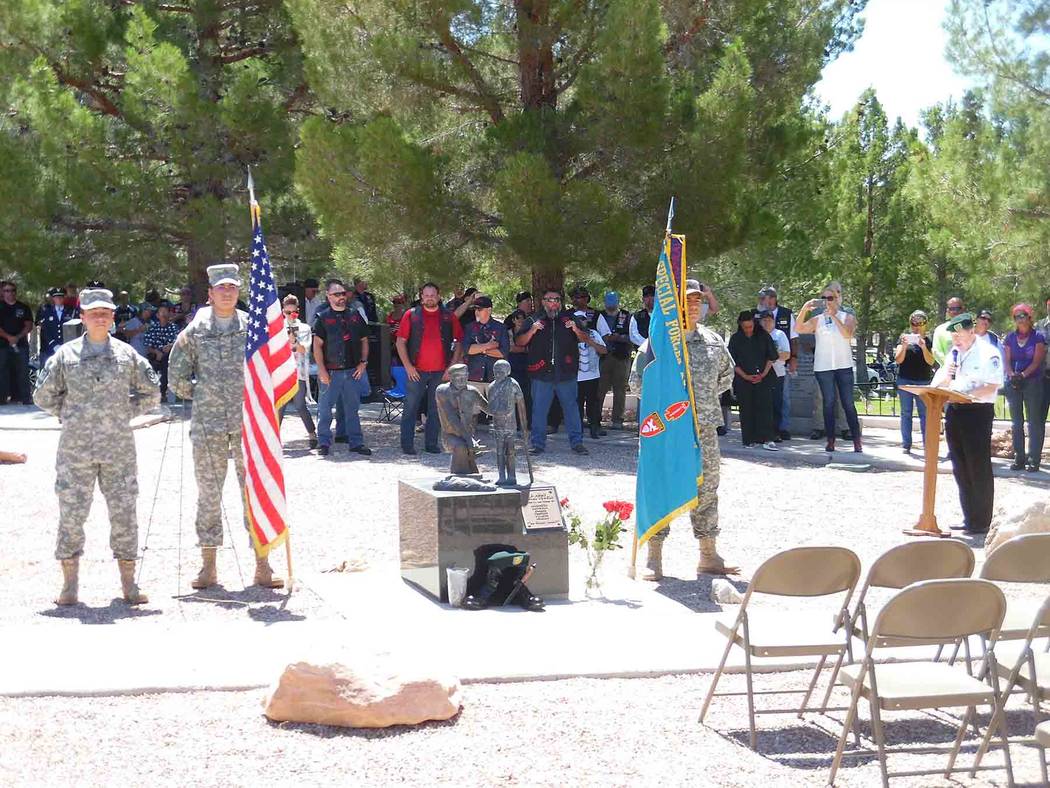 Hali Bernstein Saylor/Boulder City Review The Vietnam Vets-Legacy Vets Motorcycle Club and Special Forces Association, Chapter 51, conducted a service at the Southern Nevada Veterans Memorial Cemetery honoring the memory of those who served in the military during as part of the 23rd annual Fly Your Flags Over the Dam Run on Sunday. 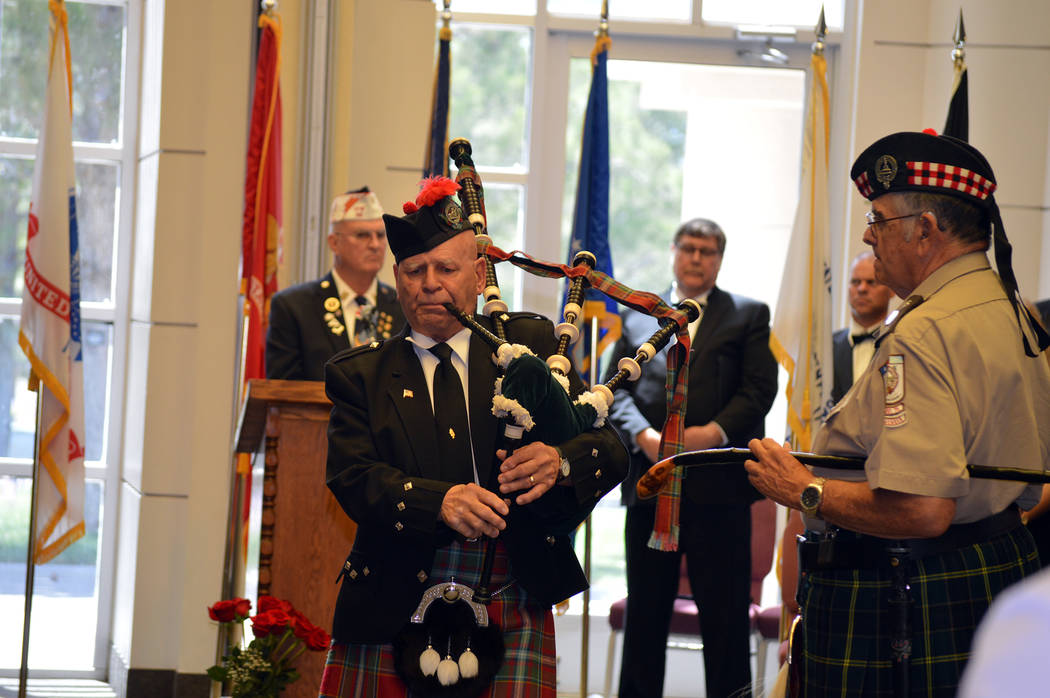 Gov. Brian Sandoval further cemented his stance on making Nevada the friendliest state in the country to veterans by signing four bills into law on site at the Southern Nevada Veterans Memorial Cemetery on Memorial Day.

The bills protect military members or their dependants from foreclosure, expand employment protections for National Guard members working in the state, and allow and simplify the process for qualifying service-connected veterans with a disability to obtain a special license plate with a handicap symbol.

Sandoval was also one of the keynote speakers for the Memorial Day ceremony held at the cemetery.

In his speech, Sandoval assured veterans and those in attendance that he was personally committed to continue to make Nevada the most veteran friendly state in the country.

“Our military reflects the story of America, and the pride of Nevada … Memorial Day is a reflection of our people — diverse backgrounds, races, faiths and creeds,” he said. “Men and women who from every corner of our nation willing to die … to defend the ideals that bind us together and define this great nation. Only when we remember our pasts, do we lay a foundation for a stronger future.

“May God bless our heroes who have found their final resting place,” he added. “May He provide peace and comfort to their families, and may He bless the United States of America, the greatest nation on Earth, the land of the free, and the home of the brave. God bless all of you.”

“For all those who secured the blessing of liberty through their last full measure of devotion, today we publicly give our thanks and prayers for their sacrifice,” he said. “May their legacy be honored for generations to come. May the tears shed over their coffins nurture the feelings of patriotism in our nation. May we prove worthy of their sacrifice, and may their blood not have been shed in vain.

“Our flag does not fly because the wind moves past it,” he added. “It flies from the last breath of every military member who died protecting it.”

After the ceremony, Heck said it meant a lot for him to be in Boulder City on Memorial Day and honor those who had given their lives in service for the country. It was even more meaningful for him to be there in uniform and as a member of the Veterans of Foreign Wars, Post 36, in Boulder City.

“Boulder City is probably the most veteran-friendly town in the state,” he said. “It’s just an incredible place.”

Saucier was in the United States Marine Corps. She started flying when she was 16-years-old, and was in charge of fleet operations in the control towers for the Marine Corps Aviation during the war.

During the ceremony, she shared some of her memories of boot camp, including when she learned she needed to be the best Marine possible after being woken up in the middle of the night when one of her fellow Marines was told her husband had been killed.

She also remembered her friend Jack, who enlisted right after Pearl Harbor and was killed at Guadalcanal.

“I couldn’t believe it,” she said about when she heard he had died. “He was so alive.”

Saucier brought those her experiences into her service during the war and remembers all those sacrifices today.

“To all the Jacks and Jills who have given their lives for our country, I salute them,” she said. “If it weren’t for them, I wouldn’t be here today talking to you.”

On Sunday, about 1,700 motorcyclists participated in the 23rd annual Fly Your Flags Over the Dam Run, traveling from Hoover Dam to the Southern Nevada Veterans Memorial Cemetery where they remembered those who served.

Joining with so many other veterans and riders added more meaning to the day, he said.

The ride was sponsored by the Vietnam Vets-Legacy Vets Motorcycle Club, with most of ceremony presented by the Special Forces Association, Chapter 51. Floral wreaths were laid in front of memorials to honor deceased Vietnam veterans as well as those who were Green Berets.