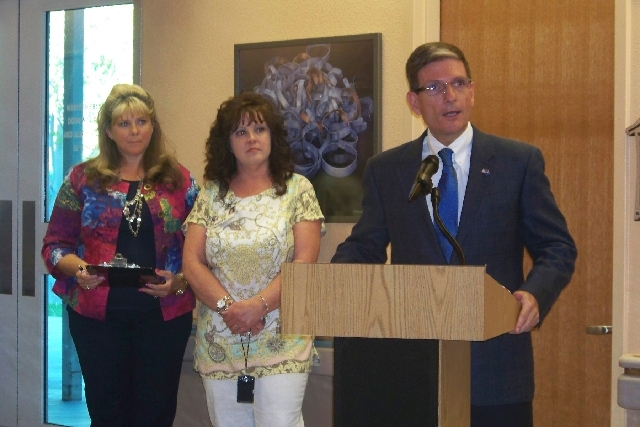 The Nevada State Veterans Home celebrated its 11th anniversary Monday at the home. The Boulder City Chamber of Commerce has made it a tradition to hold its August mixer at the veterans home closest to Aug. 12, the day the first resident arrived at the home.

Although 11 years of operation may not be what is considered a significant milestone, Frank Bellinger, the home’s director, said: “Every anniversary is an opportunity for us to celebrate everything the home stands for and all the efforts of the staff, the community, volunteers and residents’ families. It’s a special day to remember everyone and the things we have accomplished.”

He said the Veterans Affairs Department will pay 65 percent of the cost of another home, leaving the state to pay 35 percent. During the last session, the Legislature approved the building of a home in Northern Nevada, “but that doesn’t take away from the need to expand down here,” Bellinger said.

Nevada State Veterans Home has 178 residents, with room for 180, Bellinger said. There are 49 women, 12 of whom are veterans, and the rest are spouses of veterans.

“The difference between a house and a home, we all know, is love,” said Jill Lagan, Boulder City Chamber of Commerce CEO, during brief remarks .

U.S. Rep. Joe Heck described the veterans home as “the pride and joy” and “the crown jewel” in Boulder City, showing “we care about our veterans.”

Heck, one of several speakers, thanked the director and staff and said the operation of the home is a “community effort” showing the veterans their service “will never be forgotten.”

“I’ve long said that the premiums paid by our men and women in uniform have been paid in advance through their service to our nation. We will never forget the service and sacrifices they and their families have made. We will never balance the budget on the backs of those who have given so much to our country,” Heck said.

“We’re going to get rid of sequestration because it is going to have devastating impacts on our active duty force,” he said.

“Without our residents and the sacrifices they made for our country, the home (and) the staff here wouldn’t have a purpose at all,” Bellinger said as he thanked the residents of the home.

Col. Kat Miller, appointed Monday to the directorship of the Nevada Office of Veterans Services, told the audience she will begin work with architects in the next two weeks on the new veteranshome in Northern Nevada.

State Sen. Mark Manendo, D-Las Vegas, reminded the audience that during the 1990s, Nevada was one of only four states that did not have a veterans home, but because of a bill he sponsored , funds were made available and the Nevada State Veterans Home became a reality.

Also at the celebration was Bob Beebe, the Elks’ state representative and member of the Boulder City Elks Lodge 1682. Beebe assured there are always funds available at the home for every woman resident to have her hair done on a regular basis.

Elk member Dickie Lopas, a former VA nurse who has been volunteering at the home for more than six years, calls bingo for the residents every other Friday. She said she loves volunteering because she can give the residents “hugs and kisses and doesn’t have to worry about their food or medicine.”

“We have one of the greatest volunteer programs in the state,” volunteer coordinator Angela Metcalf said. There are approximately 110 volunteers who gave more than 13,000 hours of service in 2012, according to Metcalf.

Bellinger said in his years of working as an administrator of nursing facilities he has never seen “a harder working, more dedicated staff than the one we have here.”

The two youngest volunteers at the celebration were 4-month-old Kyle Bleeker and his 2-year-old sister, Josee, accompanied by their mom, Rachel. Rachel Bleeker, a Henderson resident, said she and the children spend their time with residents who don’t have many visitors. Josee Bleeker, who draws pictures for each resident she meets, “has been loving” volunteering, her mom said.

The evening ended with a ribbon-cutting ceremony for a new chamber member, AAA True Home Care.