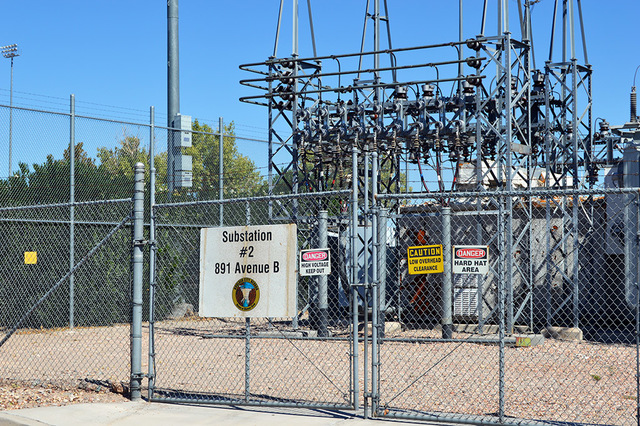 File Substation two at Avenue B and Adams Boulevard is one of six substations that supply power to Boulder City.

Since Boulder City raised its utility rates last year, the increase has been met with dismay from residents about how much their bills have gone up.

In some cases, residents say their utility costs have doubled and they have noticed mistakes in their bills. Yet others, anticipating higher costs, have taken measures to improve their home’s energy efficiency.

The city estimated that the total bill for all three services for a family of two adults and toddler on Fifth Street would increase about $20. Electricity rates increasing $0.0043 per kilowatt hour to $0.0905 per kWh for the first 2,000 kWh, costing an estimated $4 more a month. The price of water would increase 30 cents per gallon in addition to a service charge, and the cost of sewer would increase $3 a month.

Megan Reynolds-Schafer has lived in Boulder City for almost five years and currently lives in a 900 square foot home that she and her husband rent. She said that it was built in the 1980s. It has single-pane windows, all-new weather stripping, and is in the shade of the mountain by 4 p.m.

She said that this summer is the first time her bill has been more than $200.

“In fact, we maintain a pretty steady level of electric usage once the days heat up and our bills were always around $150 on the high end,” she said about her 2016 utility bills. “These last few months they’ve doubled to $300 per month.”

In September 2017, Reynolds-Schafer said that their power usage was only 21 kWh more than 2016, which should have equated to an increase of $7.26 at the new rate, yet she was charged $10 more.

“As the months have gone by, it’s gotten cooler, but my bill is still going up … There are times when I don’t pay attention, but there is something that just doesn’t seem right,” she said.

Reynolds-Schafer has also found some discrepancies with the amount she’s been billed by the city. Some months it appears as if she’s been charged a little more than she should have for her usage and others she hasn’t been charged enough.

“We have never found a situation where our system billed more than what the meter reading entry showed,” said Acting Finance Director Doug Honey. “There have been instances of human error where a meter reading was entered incorrectly, and in those cases, adjustments are made when discovered.”

Reynolds-Schafer said that the only adjustment the city has ever made to her bill has been a late charge.

Honey said that the billed amount for the kWh hours used comes from the meter readings gathered from the residents each month.

Valarie Vanario-Mullins has a 2,600-square-foot house with 20 solar panels, yet the bill for her family’s September electricity usage was $352.

She spoke with city, which sent out a technician who assessed her new meter and replaced it with another new one.

“He said that the $352 electric portion of my bill is accurate and that is what I owe,” she said of her conversation with someone from the utility office. “I told him I still did not understand how, with 20 solar panels, my bill is still so high. He said he will have the meter tech call me to set up a time to come out and explain it to me. So, I still have no information or solid explanation as to how (Boulder City) utilities is not recognizing my banked solar power.”

In terms of their power usage, Vanario-Mullins said that this year’s is the same as this time last year, even with the solar panels.

“What makes all of this so frustrating is that we have seen practically zero cost savings since installing 20 solar panels,” she said. “It’s almost as if we don’t have any panels on our roof at all. So, for B.C. utilities to tell me that their meters are reading and receiving my solar power makes absolutely no sense to me.

“We’ve even had the solar panel installation company come out twice to check all of the equipment and makes sure it’s in good working order, which it is,” she added. “Our solar installer says there is absolutely no reason why our electric bills are so high. He says it must be the fault of the utility company.”

Vanario-Mullins added that she and her husband took out a loan for $25,000 to install the solar panels, as they expected them to pay for themselves in the long run.

“If we had known that B.C. utilities would do us like this, we never would have bought the solar panels to begin with … Initially, $25,000 seemed like a lot to spend on solar, but we figured we wouldn’t be receiving electric bills at all anymore, so in six years time, these panels would have paid for themselves through electricity savings,” she said. “We even went as far as to install a solar pump on our pool. There is no rhyme or reason as to why this is happening … other than, the B.C. utilities and leadership in our town know something that us little people don’t know. And I believe they’d like to keep it that way.”

Gary Berger said that even though his rates have gone up, it was the amount he expected, and he is okay with it.

“I don’t think it’s unfair,” he said of the rate increase.

Berger, who lives in a 3,200-square-foot, two-story home with a pool, said that he has done some work on his house to help insulate it, which includes installing a thermal barrier, extra insulation, window shades, shutters and solar screens.

“I think that has had an effect,” he said. “I paid it in one lump instead of cooling charges.”

In addition, he also uses programmable thermostats that keeps the upstairs 84 degrees from 7 a.m. to 10 p.m. It then goes down to 79 degrees when people are asleep at night. For the downstairs during the day, the thermostat is set at 79 and 84 in the evening.

In terms of his water and electricity usage, Berger said that it is what he expected during the summer months.

Due to the increase and the residents’ concerns, Councilman Warren Harhay is holding a town hall meeting at 6 p.m. Oct. 19 at the Elaine K. Smith Center, 700 Wyoming St., to discuss the utility rate and fund information.