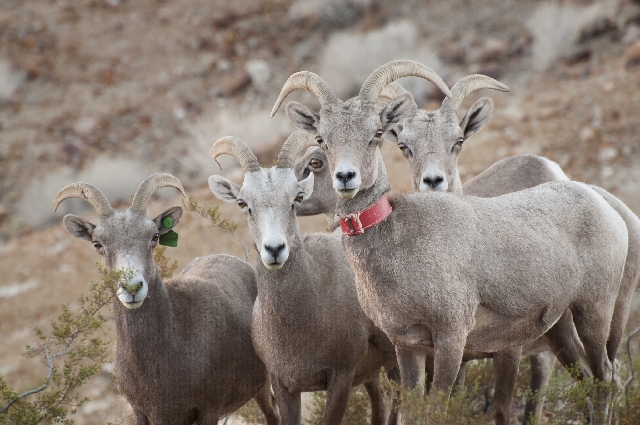 Nevada’s state animal, the desert bighorn sheep, was given a bad deal during the building of the Hoover Dam bypass bridge, according to environmental experts.

During the construction of the bridge, a planned 300-foot wildlife walkway on the Nevada side was not built, which would have created a wildlife overpass for the desert bighorn sheep that reside in the Eldorado Mountains and cross U.S. Highway 93 regularly. The structure would have been located just east of the Hacienda Hotel and Goldstrike Pass Road.

According to Ross Haley, a biologist and spokesperson for the National Park Service at Lake Mead Recreation Area, the construction company felt they had a good enough reason not to construct it: The terrain at the site of the proposed tunnel would not support the type of structure originally planned for. An overpass would have been the best choice for a sheep crossing, Haley said. “They just walk on the land like they normally would and the traffic is tunneled underneath them.”

Sheep have a natural tendency to seek higher ground when they feel threatened, according to Haley. So the theory of using overpasses made sense to him and other experts.

“As long as they’re above you, they feel pretty comfortable,” Haley said. “You can look up at them and they look pretty relaxed, but if you come over hill and they’re below you, they freak out.”

The plan to build the bridge stemmed from a lengthy process that many construction projects similar to the Hoover Dam bypass must go through before ground is ever broken.

The bypass bridge project leaders were required to begin the process by preparing an environmental impact statement because of the large effects the project could have on the environment. The process also included a public meeting for the affected areas — held in Kingman, Ariz., Las Vegas and Boulder City in 1998.

The final environmental impact statement came three years later, and the final leg of the process a few months later: the record of decision, a document stating the final decision on how to deal with every stakeholder’s environmental concerns.

The record of decision for the bypass bridge showed plans to implement multiple wildlife crossings. The plan included four underpasses and three overpasses — located in Arizona, and costing more than $2 million. Additionally, two bridges would create two more underpasses, and the short tunnel for automobiles to travel in would have created another overpass on the Nevada side.

There are no plans to install overpasses on U.S. 93 in Nevada.

When asked how many crossings involved sheep getting into the road, local authorities painted a frightening picture.

“It happens so often that it’s hard to say,” said Lt. Mike Maynard from the Nevada Department of Wildlife.

According to Maynard, Nevada Department of Wildlife does not usually handle calls about wildlife in the road. But when they do, the call is usually not good news.

Most times we are going out there to pick up a deceased animal, Maynard said.

Haley sees a brighter future for sheep in Arizona, where three wildlife overpasses were built during the construction of the bypass bridge for $4.8 million.

Sheep herds move across the Black Mountains and across the bridges hanging over U.S. 93 in search of mates and food. Haley points out that Arizona had a reason for building so many bridges: There were 13 new miles of road built in Arizona and Nevada only had three.

Experts in Arizona agree with Haley’s logic about the bighorn sheep’s natural tendency to climb when they feel threatened, leading to the construction of the overpasses.

“They look for steep rock terrain because most predators can’t get to them when they are up there,” Jeff Gagnon, a biologist with Arizona Game and Fish, said. “That’s why we built the overpasses.”

The overpasses were fostered after a two-year study was conducted to find the most beneficial place to put them and found three points between mileposts three to 17. Using tracking collars to find out where the sheep travel most frequently, the study showed that 82 percent of the wildlife crossings occurred at mile markers 3.3, 5.1 and 12.2, leading officials to choose these points for the new overpasses.

According to the Arizona Game and Fish’s website, as of June 2012, there had been a total of 500 wildlife crossings in 15 months and 229 in one month, compared to 32 crossings at three underpasses that go underneath Highway 68.

A fair estimate of previous statistics on vehicle collisions near the bridge is not easily made because of the truck restrictions on U.S. 93 that were put in place after Sept. 11, 2001, Gagnon said. Before the restrictions, there were 11 collisions between sheep and cars in one year.

The sheep have little to fear on U.S. 93 in Arizona.

“Last year there were zero incidents on Arizona roadways,” Gagnon said. “The bridges are working.”