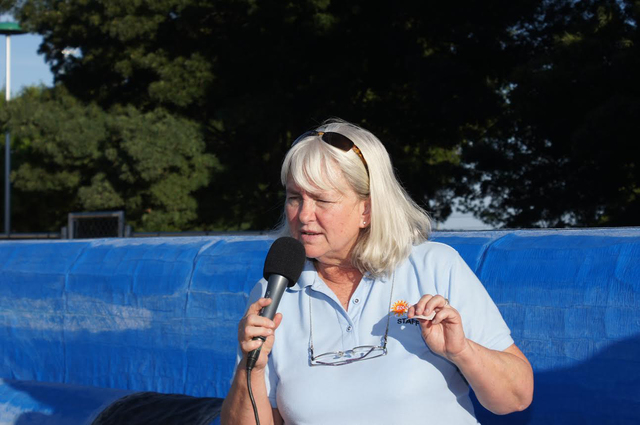 Bobbe Wilson wasn’t looking for a career at the Boulder City Pool. It was supposed to be a part-time job to keep her busy while her kids were in school.

But in 1987 when the mother of two began working at the pool as a front-desk cashier, it was the unlikely start to a 27-year adventure.

Wilson, 62, is set to retire soon as she leaves her post as the city’s aquatic administrative clerk. During her tenure at the pool, her skills extended from more than just administrative duties. As the years went on, she became more pool savvy, and in 1993, she and former aquatic coordinator Stana Hurlburt won the national award for Best Pool in the Country for cities with less than 25,000 people.

It was the first time any pool from Nevada had won the award. It also showed Wilson that she could do more than simply hand back change to customers at the cash register.

“I had to learn a lot of the mechanical issues and the behavior of the pool,” she said. “I just sort of created my own world down there and was just a jack of all trades.”

Wilson said winning the award was arguably her biggest achievement during her career at the pool, a career that saw several supervisors and countless employees. Winning the award also helped them restructure their program to maintain a greater quality of service.

“We completely changed how we recruited our instructors, how our programs were taught,” she said. “The challenge was doing it with a very old facility in a very small community.”

When she became a certified pool operator in 1999, she handled both administrative work and pool maintenance simultaneously.

“I was handling pool chemistry, pool mechanics, front-desk staff … and planted roots at the pool,” she said. “And I’ve done it ever since.”

But it hasn’t been all fun and games for Wilson. The pool’s older facilities have led to several maintenance issues over the years. Mechanical issues and plumbing problems are among the many she’s dealt with, and Parks and Recreation Director Roger Hall said it isn’t uncommon to see Wilson running toward the pool during a storm because of a power outage.

“If you don’t shut down certain valves you can lose the pumps,” Hall said. “She goes above and beyond the call of duty.”

Wilson has also seen people come and go throughout her career. Some of the teenage lifeguards she’s worked with in the past are now adults and have since brought their children to the pool.

“It’s kind of an eye-opener. Like, how many years have I been here?” she said with a laugh.

But even after she calls it a career, Wilson said she plans on staying involved at the pool. She hopes to eventually be appointed to the Parks and Recreation commission, but would also love to give swimming lessons.

After all, it’s the same pool where she got her first swimming lesson as a kid from Long Beach, Calif.

“As I got more involved with the recreation department and the pool, it just came to the forefront and I just made it home,” she said. “I wasn’t really looking for a career out of it. I just found a place not only where I fit in, but where I was able to become educated along the way.”