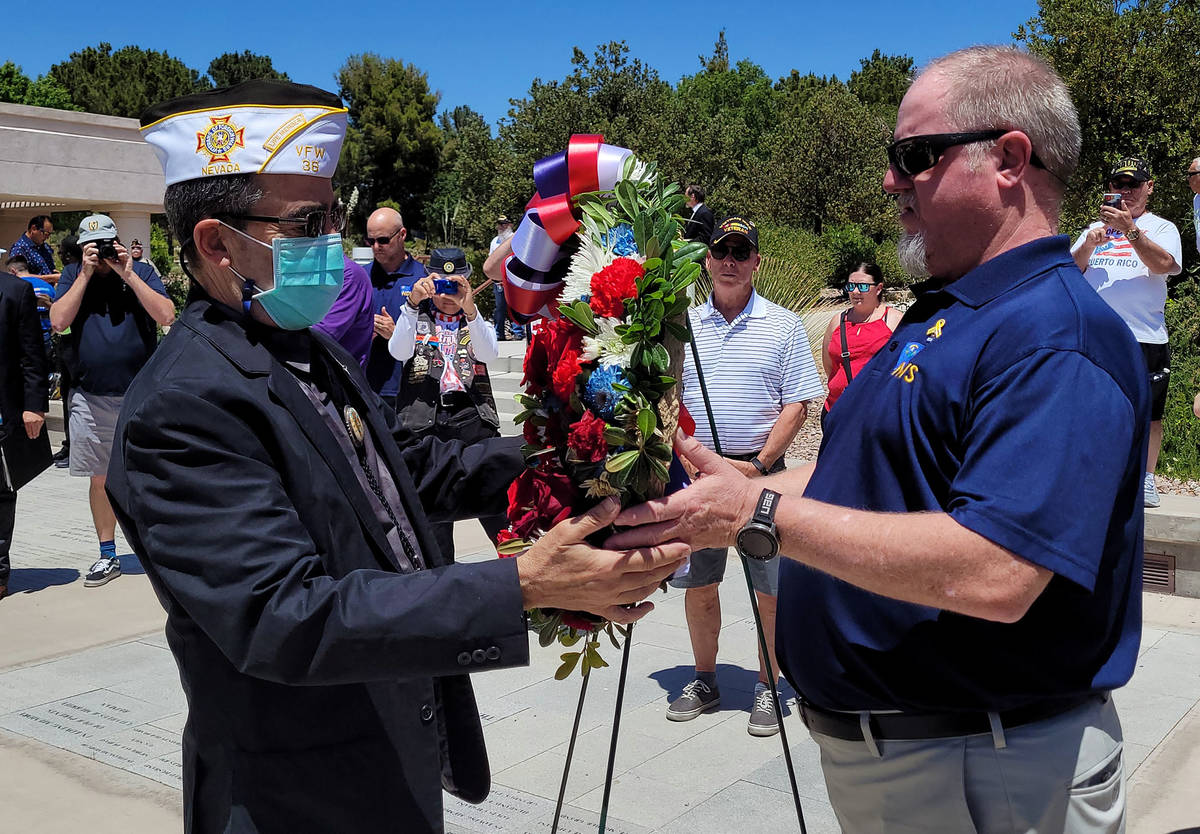 Celia Shortt Goodyear/Boulder City Review Bill Perlmutter, left, receives a wreath to commemorate those who died in service to the country from Evan Rush, outreach director for the Nevada Department of Veterans Services, at the Southern Nevada Veterans Memorial Cemetery on Monday, May 31. Perlmutter, a retired captain in the U.S. Navy, placed the wreath during a special ceremony. 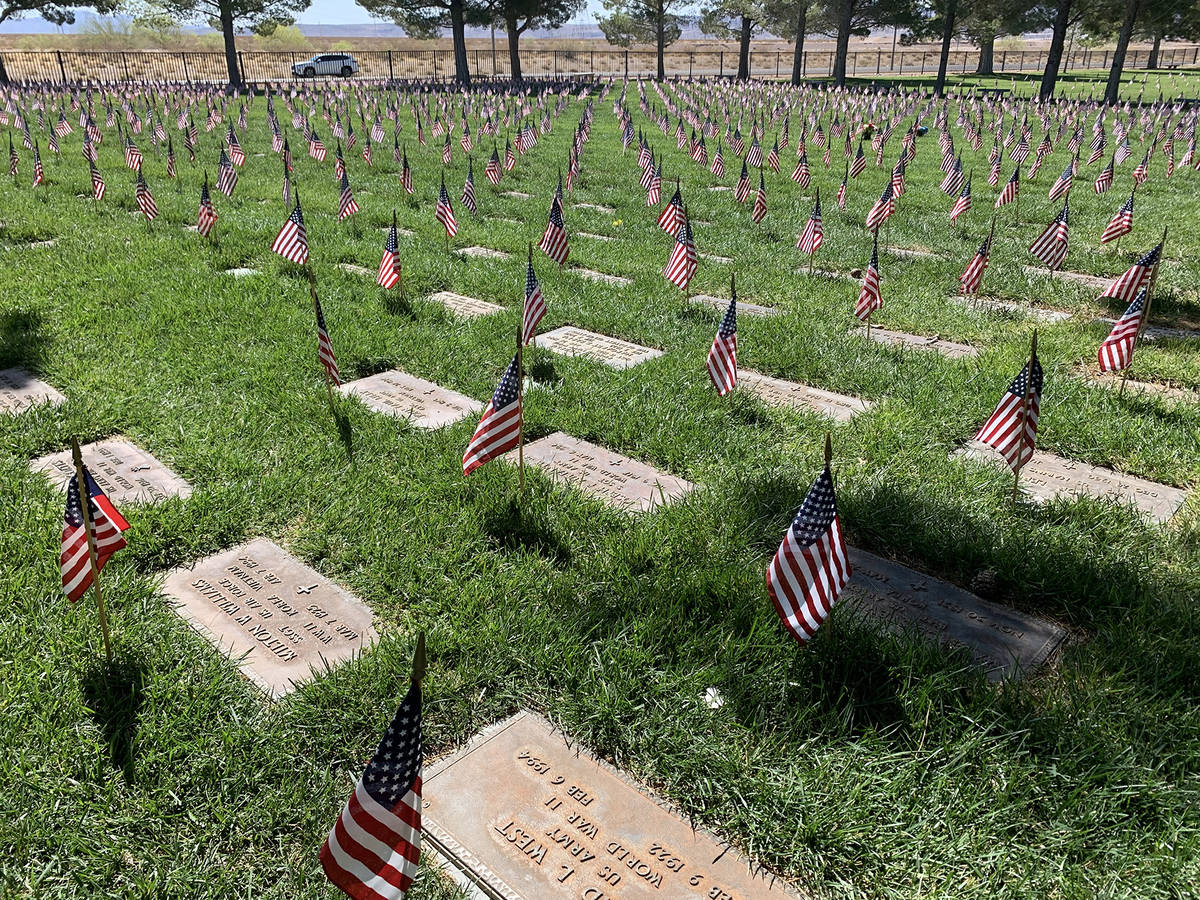 (Hali Bernstein Saylor/Boulder City Review) Flags placed at every gravesite wave in the breeze at the Southern Nevada Veterans Memorial Cemetery in Boulder City on Sunday, May 30, 2021. 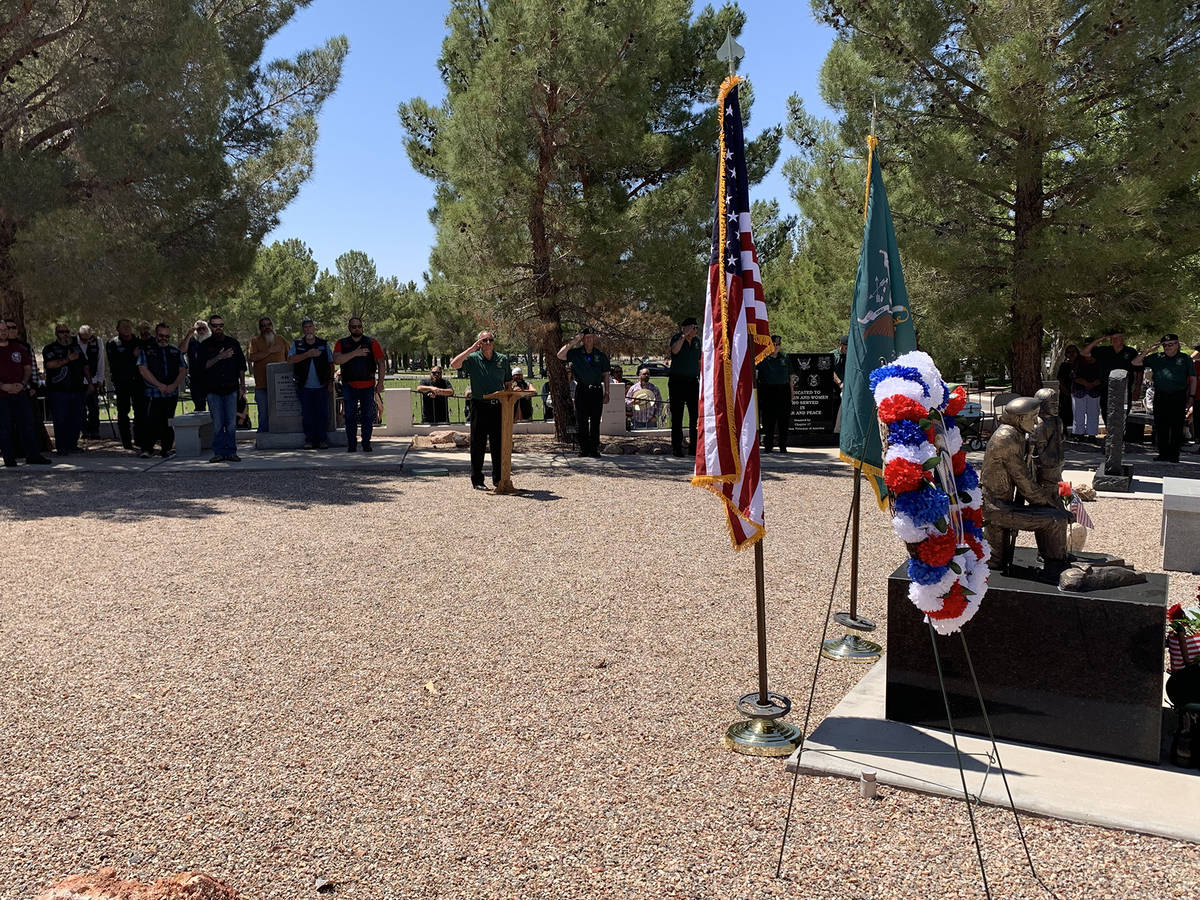 (Hali Bernstein Saylor/Boulder City Review) Members of the Special Forces Association, Chapter 51 of Las Vegas, joined with members of the Vietnam Vets Legacy Vets Motorcycle Club and other motorcyclists for a Memorial Day ceremony Sunday, May 30, 2021, at the Southern Nevada Veterans Memorial Cemetery in Boulder City. Several hundred motorcyclists came to the cemetery after participating in the 27th annual Fly Your Flags Over the Hoover Dam run. 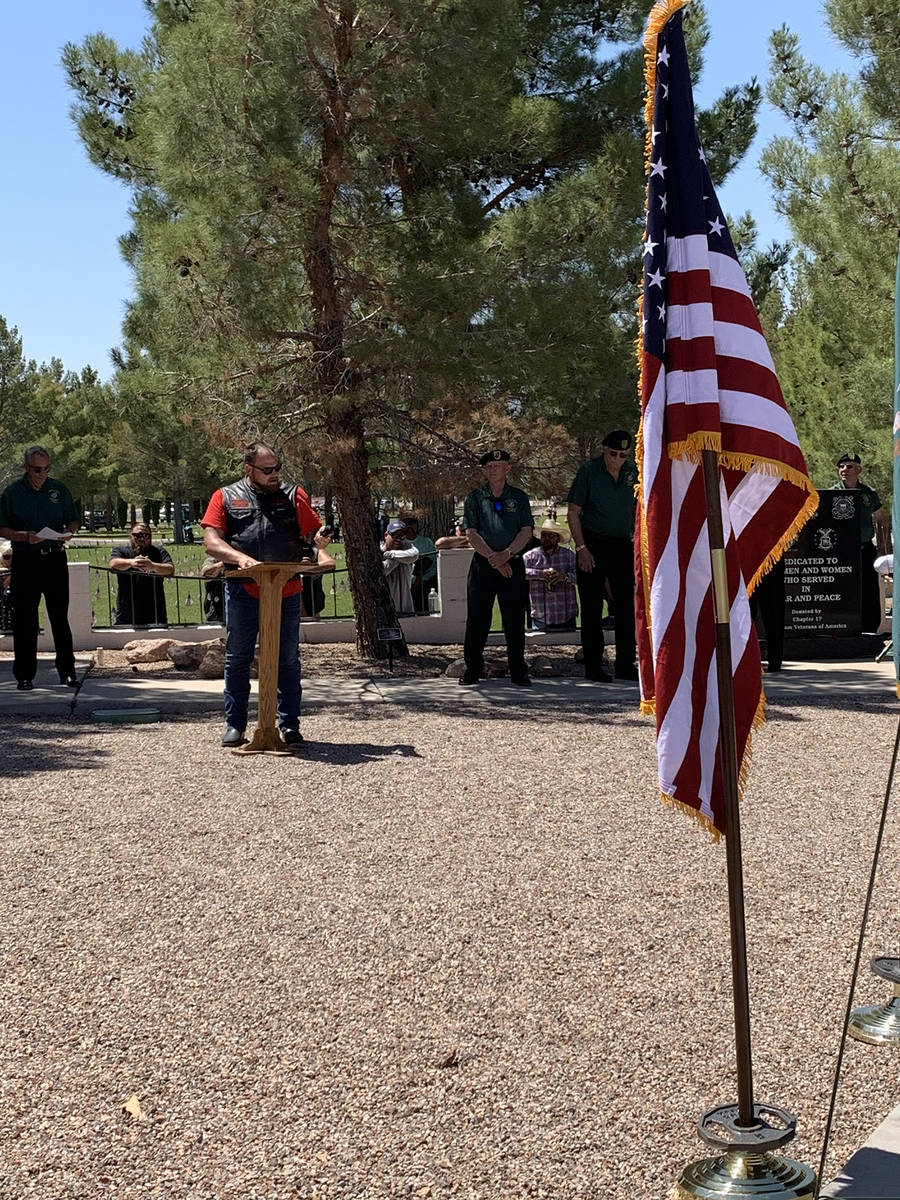 (Hali Bernstein Saylor/Boulder City Review) Arrow, president of the state Vietnam Vets Legacy Vets Motorcycle Club, speaks about the price paid by those who lost their lives in service to the country during a Memorial Day ceremony Sunday, May 30, 2021, at the Southern Nevada Veterans Memorial Cemetery. 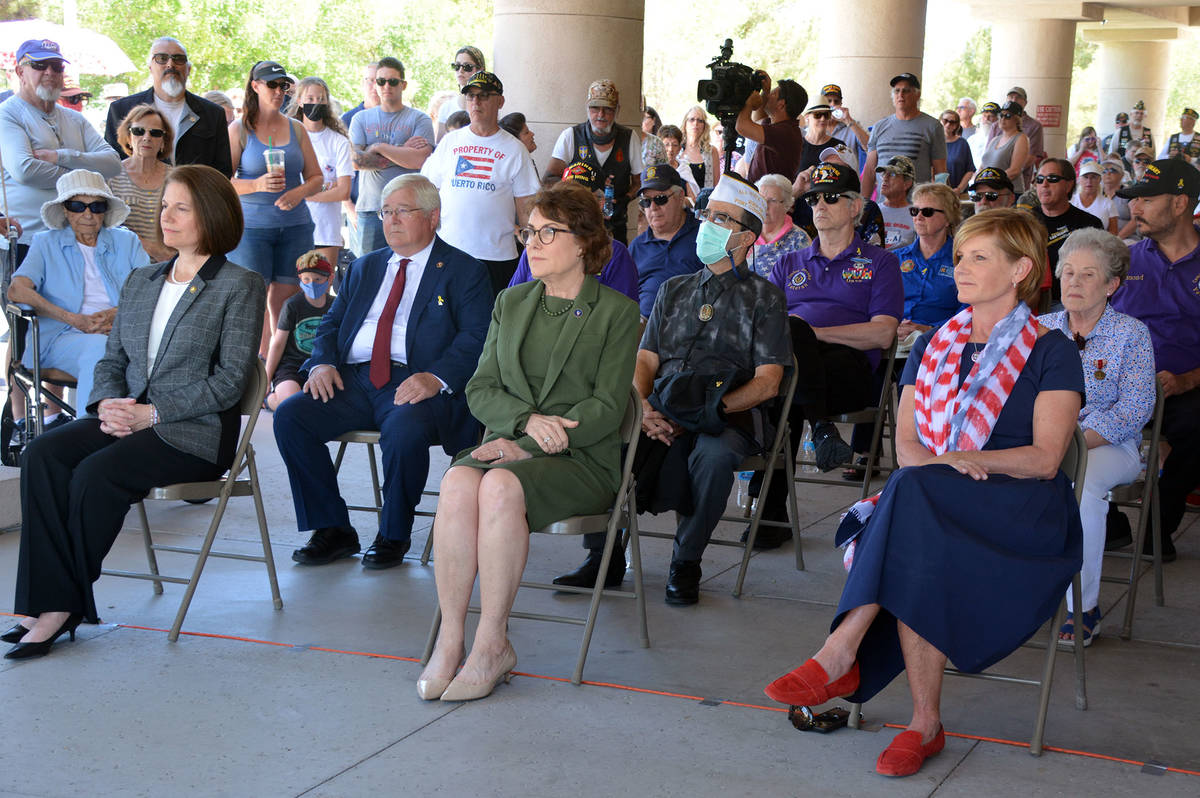 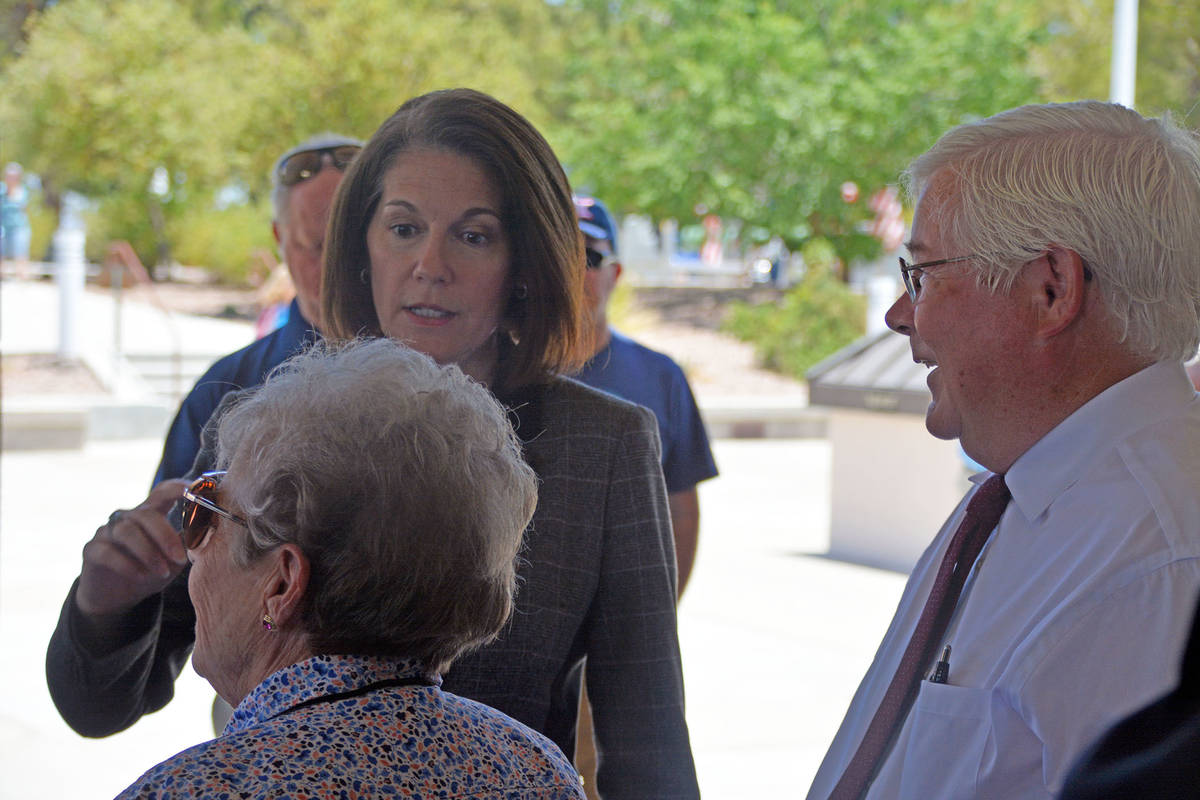 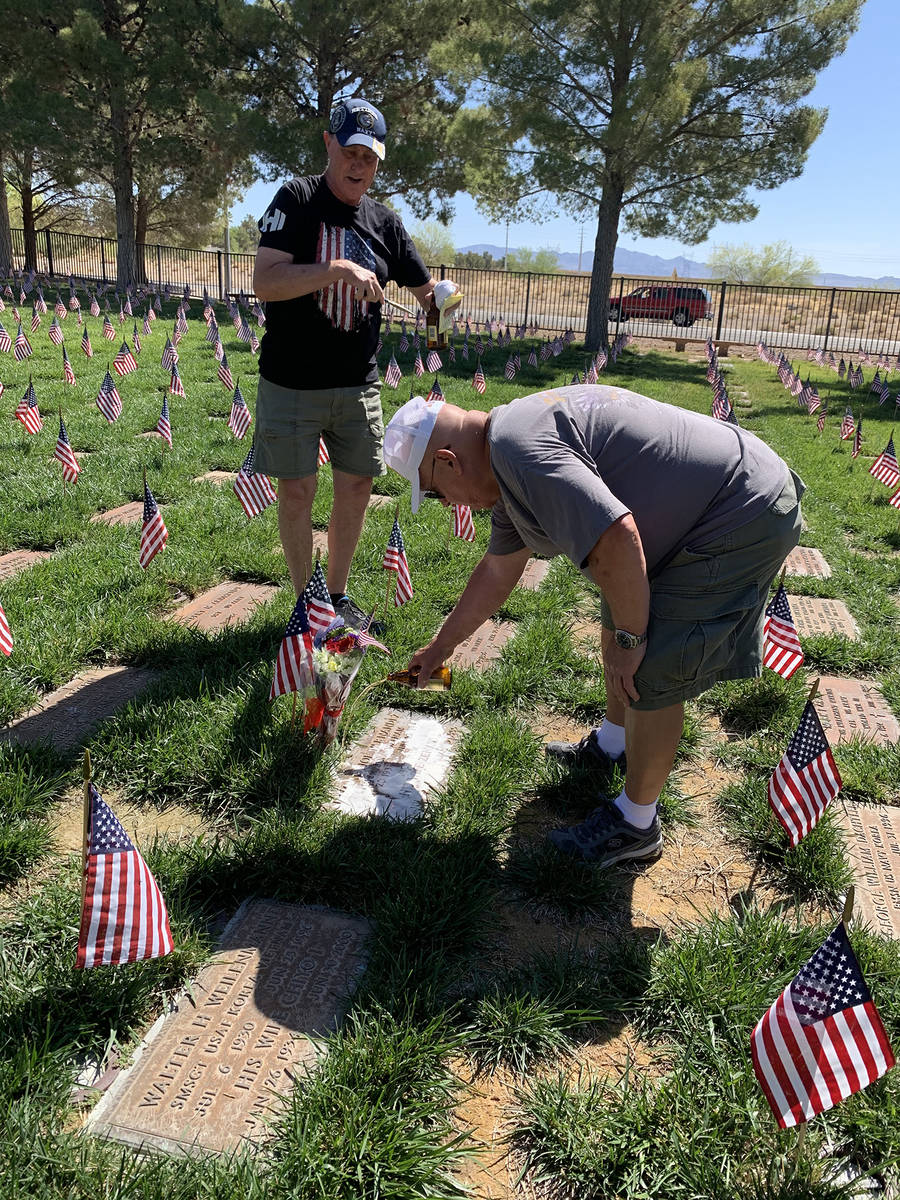 (Hali Bernstein Saylor/Boulder City Review) U.S. Navy veterans Mick McLean, left, and Al Slagle of Las Vegas paid tribute to friends who were part of a group of ex-sailors and civil servants residing in the Philippines. They placed flowers at their graves and poured Philippine beer on their headstones in honor of their friendship and service. 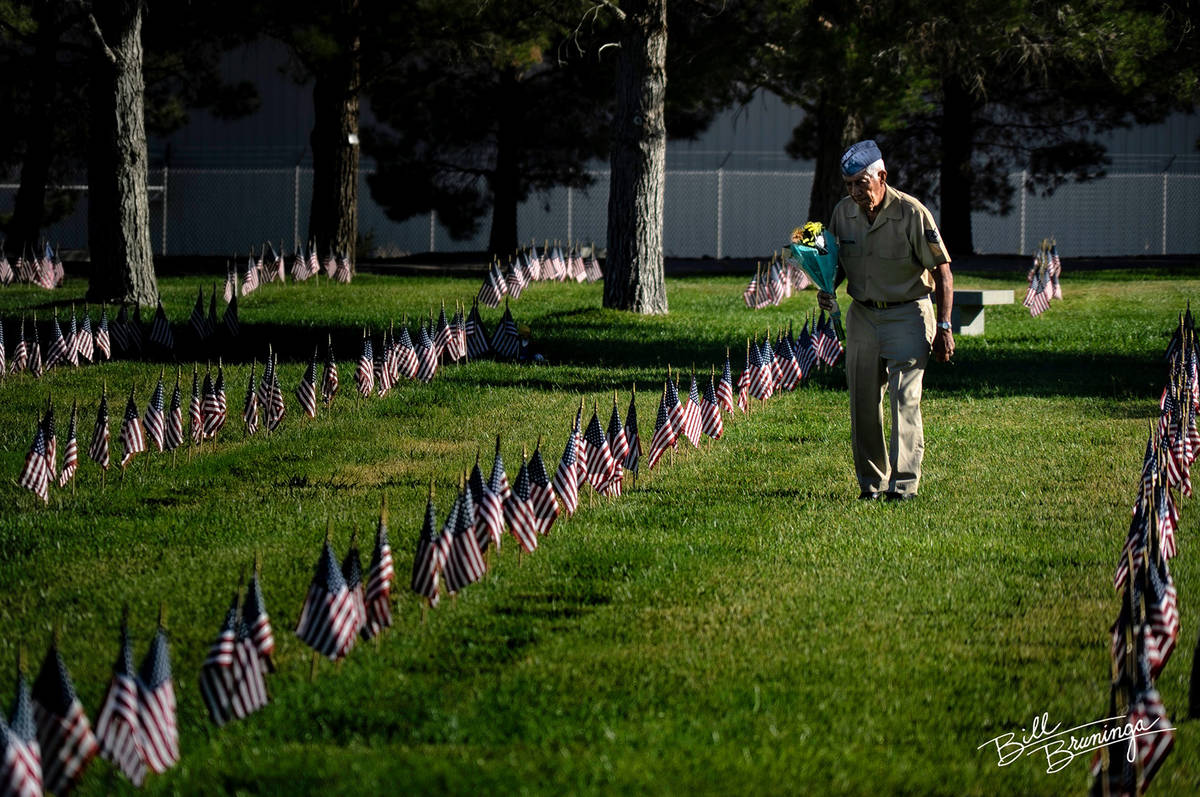 (Bill Bruninga/Special to the Boulder City Review) A retired veteran pays tribute to family members at the Southern Nevada Veterans Memorial Cemetery in Boulder City on Monday, May 31. 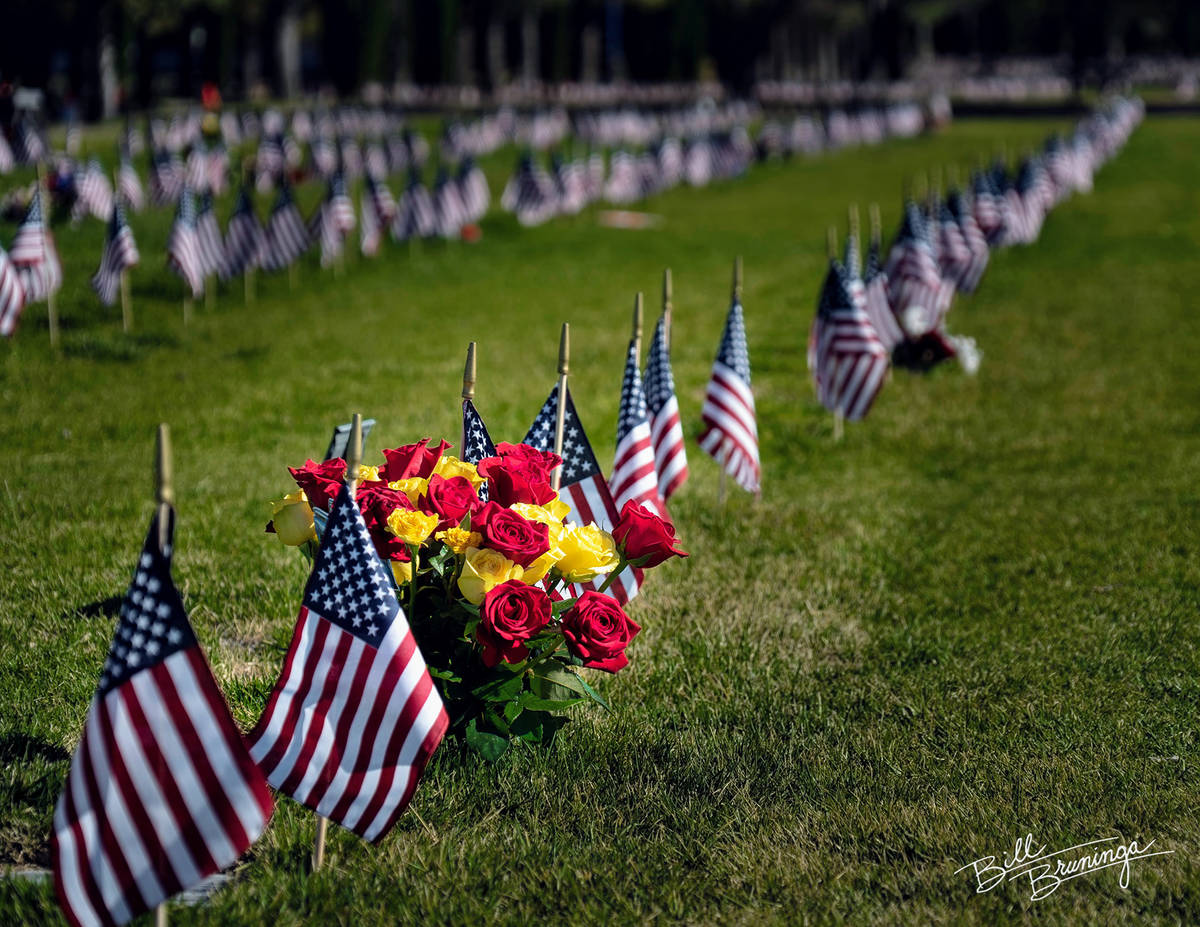 (Bill Bruninga/Special to the Boulder City Review) Flowers and flags adorn the gravesites of veterans buried at the Southern Nevada Veterans Memorial Cemetery in Boulder City on Monday, May 31. 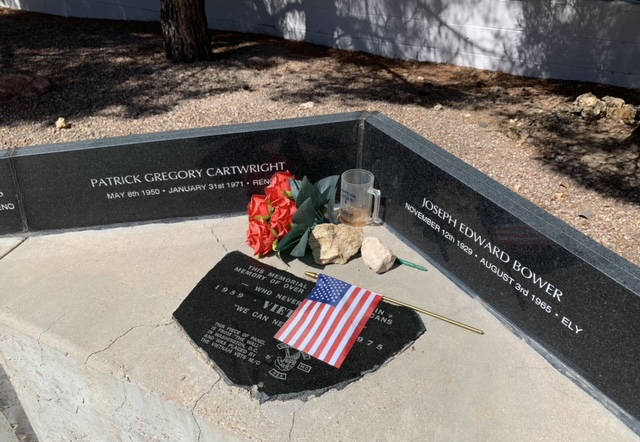 (Hali Bernstein Saylor/Boulder City Review) Special mementos were placed at the memorial at the Southern Nevada Veterans Memorial Cemetery on Sunday, May 30, 2021, to honor Nevadans killed during the Vietnam War. 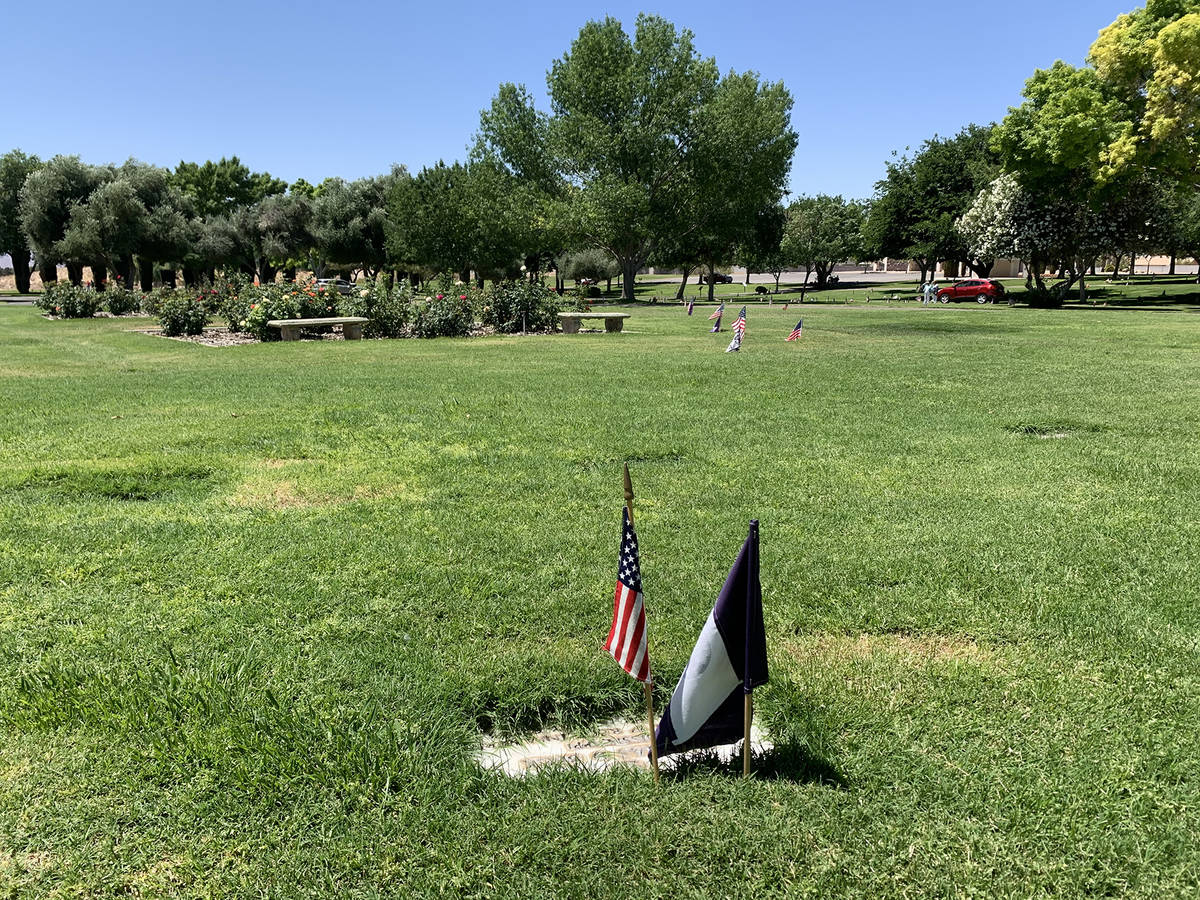 (Hali Bernstein Saylor/Boulder City Review) Members of the American Legion, Post 31, its auxiliary and community volunteers placed flags at the gravesites of veterans buried at the Boulder City Cemetery for Memorial Day 2021.

As local services returned a sense of normalcy to the weekend’s usual events, pride, honor and patriotism were as strong as ever.

“It’s an honor to be here,” said Bob Garlow, past commander of Veterans of Foreign Wars, Post 36, in Boulder City, who served as master of ceremonies for the state’s Memorial Day ceremony at the Southern Nevada Veterans Memorial Cemetery on Monday, May 31, afternoon.

The program was open to the public and featured music by Phil Esser and the laying of a ceremonial wreath at the cemetery’s Walk of Life memorial to honor veterans.

“When they selected me to do this, it’s one of the greatest honors of my life,” said Bill Perlmutter, a retired U.S. Navy captain.

Perlmutter, who serves as the chairman of the advisory board for the veterans’ cemetery, placed the wreath during the ceremony.

He said he thought it was OK for people to have a good time on Memorial Day with their family and friends but it was also important to take a minute to reflect on those who had given their lives protecting the country.

On Sunday, May 30, hundreds of motorcyclists participated in the 27th annual Fly Your Flags Over the Hoover Dam. They rode from the Arizona side of the Hoover Dam, past the Southern Nevada State Veterans Home to the Southern Nevada Veterans Memorial Cemetery where they joined with members of the Special Forces Association, Chapter 51, coming together as they do each year to honor their fallen brothers.

Crowded in the shade under the trees surrounding war memorials honoring those who served, the two groups gathered for a short service that paid tribute to those in the Special Forces who were killed in the past two years, as well as members of the association who died since the last ceremony in 2019.

It included a virtual 21-gun salute, the playing of taps and “The Ballad of the Green Berets.”

Arrow, president of the Nevada Vietnam Vets Legacy Vets Motorcycle Club, said the Memorial Day ceremony is a painful reminder of how those who served in Vietnam weren’t honored upon their return home or for their selfless sacrifices.

He said they were glad they were able to add a drive past the veterans home and even though most residents couldn’t be outside to see them because of the heat, the riders made sure their presence was known.

Prior to Sunday’s ceremony, Navy veterans Mick McLean and Al Slagle of Las Vegas came to the cemetery to honor those they served and worked with in the Philippines. Calling themselves the last two of the “dirty dozen,” the men placed flowers at the gravesites and poured Philippine beer on the headstones of two friends.

They said they come out every Memorial Day and Veterans Day and know the honor would be returned if they had died before their friends.

At the Boulder City Cemetery, members of American Legion, Post 31, and its auxiliary placed flags on the graves of veterans buried there.