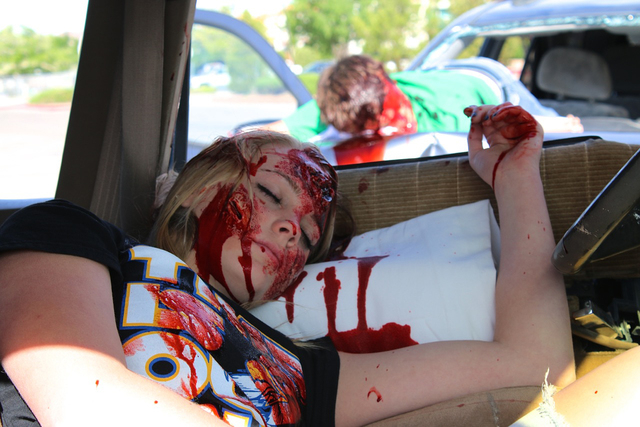 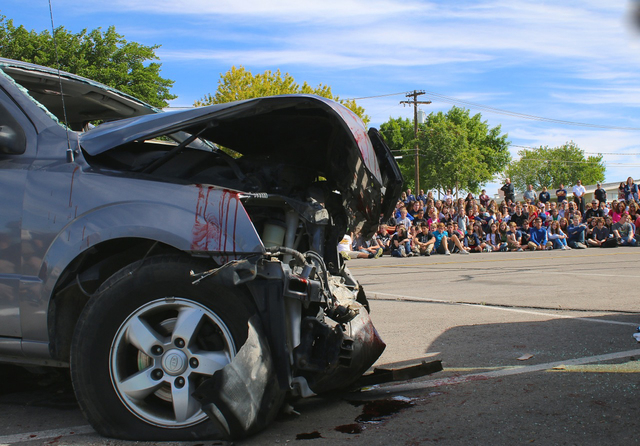 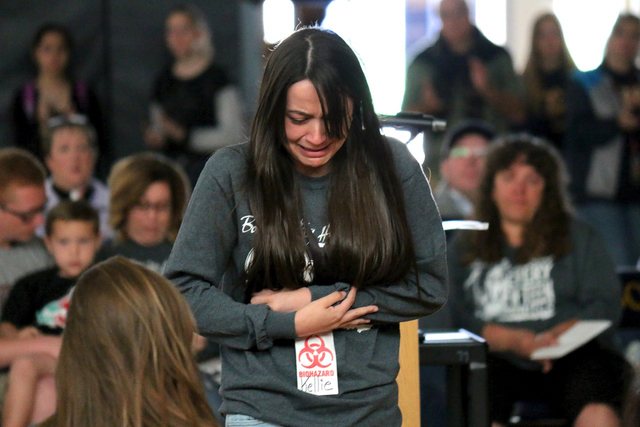 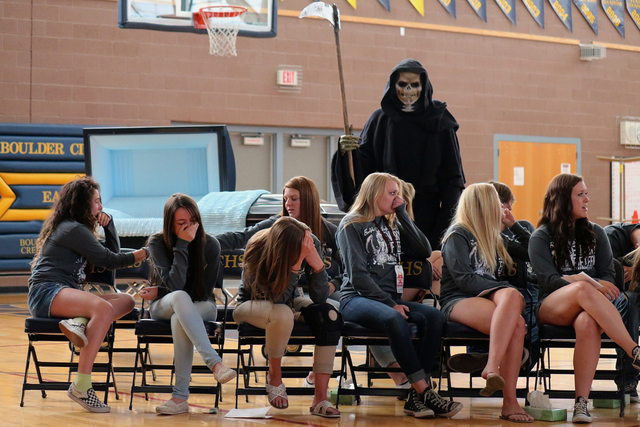 More than 20 years ago, Ben Hanson was assumed dead after his car was crushed by a drunken driver.

On April 9, history repeated itself, but this time the driver was his daughter, Samantha. After being hit by a drunken driver, she was taken to Boulder City Hospital by Mercy Air, where she would later die from her injuries.

Fortunately, the second accident was just a re-enactment, part of the nationwide Every 15 Minutes program that aims to teach high school students about the dangers of drinking and driving.

The program, based on the premise that someone in the United States is injured in an alcohol-related accident every 15 minutes, was presented at Boulder City High School April 9 and 10.

Both of Hanson’s daughters, Samantha and Hannah, were involved in the program and the family uses his experience to help warn high schoolers about the potential implications of their actions.

“I think having (the Hanson sisters) kind of affected us, but the school, too, because they were all like ‘Oh wow, that was their dad’, so that actually happened,” said Kayla Mc Innis, who portrayed the drunken driver. “We’re not just acting it out.”

For the first day of the program, wrecked cars were brought in from Big Johns Towing, and the scene of an accident was re-created. A makeup artist helped students look like they were injured in a car accident with glass protruding from their bodies and blood spatter.

Wyatt Tilman portrayed someone who was dead on the scene. During the accident he was thrown through the windshield of Mc Innis’ car.

Samantha Hanson was the driver of the car that was hit.

The whole scene played out just as a real car accident would. A 911 call was made by passenger Skylar McKay, followed by the arrival of the Boulder City Police and Fire departments.

Mc Innis was given a sobriety test before being handcuffed and taken to jail. She was fingerprinted, shackled and put in a cell, all as if she was really being arrested for DUI.

Even the coroner showed up, to examine Tilman and place him in a body bag for his autopsy.

“It taught me how quick everything can happen, and how one thing affects a whole lot of other people,” Mc Innis said. “And how the drunk driver, their one decision affected all these other people.”

In addition to the accident re-enactment, sophomores and juniors at Boulder City High were selected to portray people who have been affected by drunken driving. Throughout the day on April 9, the Grim Reaper walked into classes and removed students. Later, an officer would come in to announce the students’ deaths.

Students would return to their classes later, but with their faces painted white. For the rest of the day they were dead, completely disconnected from their peers and family. Cellphones also were collected from the students.

They spent that night at Railroad Pass and guests speakers came to talk to them about the implications of drinking and driving. Carol Hanson brought a video of her son’s crash for the students to watch.

At the same time, the students’ parents attended a retreat to deal with the grief of losing their children. One of those parents was Laura Hanson, Samantha and Hannah’s mother.

The Hansons used their tragic accident to motivate students.

Friday morning, the whole student body gathered for an assembly featuring guest speakers and a video of everything that had happened the day before.

Dr. Jim Preddy, an emergency medicine doctor who specializes in trauma at University Medical Center, was one of the speakers. He said he sees alcohol-related injuries come into UMC daily.

Working in an ER dealing with trauma victims, Preddy said he has had to deal with his fair share of young adults affected by drinking and driving, anywhere from losing an arm to death.

“It’s that thing that a trauma surgeon or an ER doctor knows,” Preddy said. “That sound that parents make when they find out that their son or daughter has died. It’s a horrible wail, and it’s unmistakable.”

After Preddy spoke, the video highlighting the program was played. It showed the reactions of parents as police informed them of their children’s deaths, as well as the experiences the students had at jail and the hospital.

Sniffles could be heard as some students wiped tears from their eyes.

“It’s so emotional in there, because your friends, they see you, but for whatever reason we spark that emotion that their friend is gone, even if it’s just for a day,” said David Krumm, Boulder City Police’s school resource officer who helps organize the two-day program along with Barbara Agostini, the school’s registrar.

Boulder City puts on the program every other year, with the help of many organizations throughout the city. Krumm said the planning starts in September or October, and can take anywhere from six to nine months to plan, depending on when they have the program.

“A lot of people help,” Krumm said. “A lot of people donate a lot of time, which is what is amazing about being here in Boulder City. Behind the scenes it’s a lot of work. But it’s well worth all the work that we put into it.”

The program’s assembly came to a close with Kellie Corona tearfully reading her goodbye letter aloud, and Mc Innis’ parents reading their letter to their daughter, who was sentenced to 20 years in prison. Their letter outlined things they will never get to witness such as her wedding or the birth of her children.

“This could actually be my goodbye letter one day, if I messed up and made a bad decision,” Mc Innis said. “So it’s just like I don’t want to do that. It kind of teaches you that’s what you’re going to be leaving behind. I’m talking about real things. My real parents talking about everything that happened. It was kind of like a crazy thing to think about.”

Over time, the number of alcohol-related accidents in the U.S. has gone down, despite of an increase in traffic and the amount of miles driven. Krumm said he hopes it’s a sign that programs such as Every 15 Minutes are making people think twice about their actions.

“If we can get one kid to stop, or to think about it when their doing it, then I think we did our job,” Krumm said.