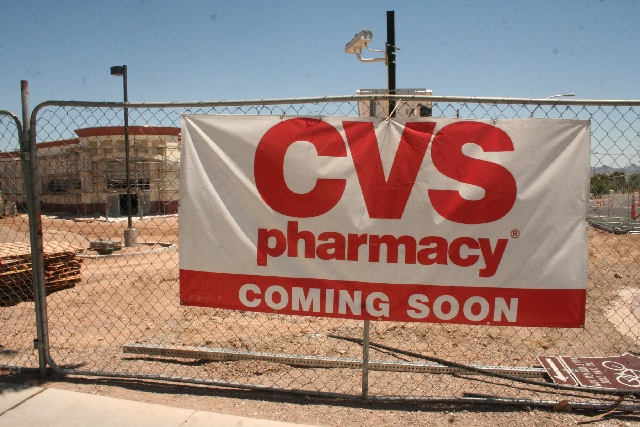 When construction of the new CVS/pharmacy began in February on the lot on the southeast corner of Nevada Way and Buchanan Boulevard, debate of its merits began almost immediately among citizens.

Residents are expressing positive and negative responses to the store, which is scheduled to open in August.

“It’s a big pretty new building,” Cummings said. “Makes the town look nicer at the main intersection. Might even add a job or two.”

Cummings admits that it may affect the business of other local stores, but only for a short time.

“The first month or two it might because of the draw of going into a new store,” Cummings said. “It might hurt Albertsons and Vons pharmacy side because it will have a drive-thru, but I would imagine not much, if at all.”

Cummings, who works at Extreme 911 on Industrial Road, drives through the intersection every day to and from work.

“It’s going to be nice to see a new building where the eyesore of an empty lot has been for years on my daily commute,” Cummings said. “Brightens up the town … between that and all the new roads.”

The stand-alone, 13,000-square-foot CVS will replace the one in the strip mall at 1301 Nevada Highway next to Vons. It will sit at the gateway of the recently completed Nevada Way revitalization project.

Although Cummings thinks the new store is a positive addition to the town, local resident Nichole Drazer does not.

Her main concern is about the ability of customers to enter and exit the property safely at the busy corner.

“I think that it is in an inconvenient location,” Drazer said. “Where the old one is at is a great location. It doesn’t block traffic, and it’s in a shopping center, which is safer.”

Drazer thinks the location of the new store will cause more traffic at the intersection.

Local resident Hailey Broadbent echoed traffic concerns “through that light and the entrance.”

“I believe CVS will take away from other stores due to the services offered and could put others out of business,” she said.

The new building is a “waste of money,” Drazer said. “I don’t think they needed a new one. The one in the shopping center was fine.”

Growing up in Boulder City, Drazer doesn’t think that the new store will fit in with the town. She thinks the huge building will appear out of place to tourists, and give off the wrong feel for the town.

Bianca Franzes, who graduated from Boulder City High in 2012, said the space should be used for something else because the town already has a CVS.

“Now there’s going to be an empty space in the Vons center,” she said.

Because of corporate regulations, the employees at the current CVS are not able to talk to the media about the new store.

However, one employee who didn’t want to give her name is excited for the new location to open.

“The new building will be bright, new and clean addition,” she said. “It will offer customers the option of a drive-thru pharmacy or a spacious walk-in, equipped with a minute clinic. I am excited and ready for this new and exciting addition (to) our charming Boulder City.”