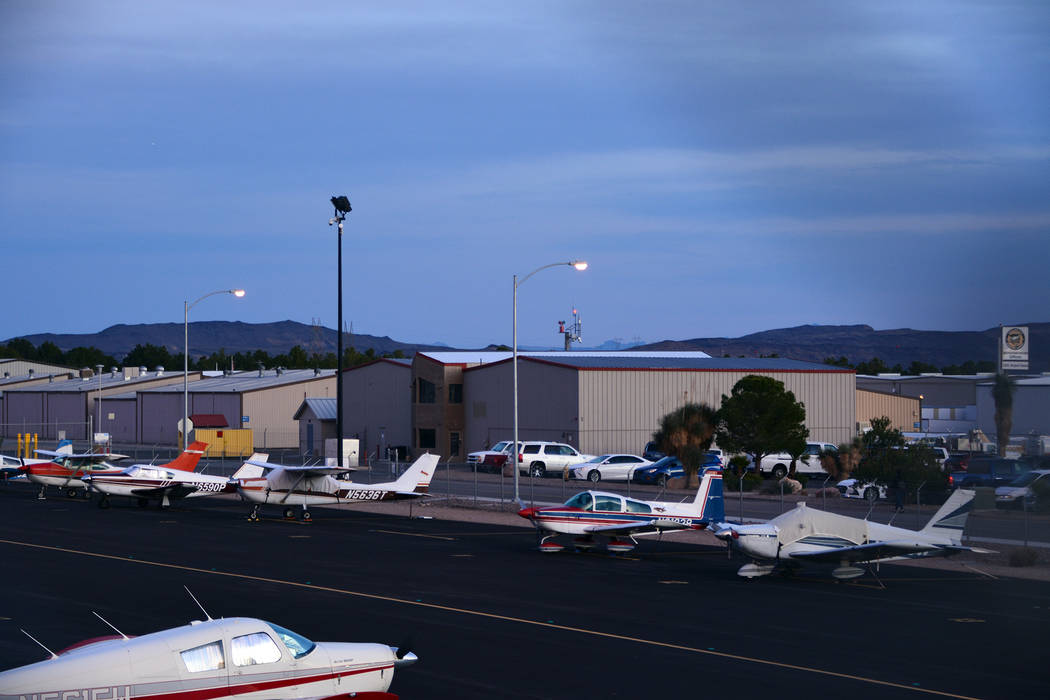 (Celia Shortt Goodyear/Boulder City Review) The leases for 28 hangars at the Boulder City Municipal Airport expire in July, and their owners said they want the city to renew or extend the contracts.

Hangar owners at Boulder City Municipal Airport want their land leases extended or new ones created rather than having their property revert to city ownership in July.

They expressed their concerns and opinions on moving forward at a well-attended and almost four-hour-long City Council workshop on Jan. 23.

During the presentation, Airport Manager Willy Williamson said there are 139 hangars at the airport on city-owned land. The leases for 28 of them expire in July, ending a 30-year contract. According to section 40 of that contract, the tenant agrees to transfer ownership and title to all the permanent hangars and other improvements to the city when the lease terminates. This action is commonly referred to as a reversion clause.

“We’ve been told that’s the template for what’s going to happen with the rest of the airport, so if they take all the hangars that we’ve got, they’ll take all the hangars at the airport,” said Rob Martin, who owns six. “That’s currently the plan for staff and has been for years no matter what they’ve told you. Because they’ve told me that directly several times. … I’m certainly not going to rent my hangar back from the city after June. I will be removing doors. I will be removing other stuff. They will essentially be valueless.”

Martin said a new lease needs to be created and he doesn’t mind paying more for land rent.

“We (hangar owners) all want to pay our fair share,” he added.

Mike Caruso, who did his first solo flight at the airport in 2004, recently moved to town said he purchased a hangar in August. It’s one with a land lease expiring in July.

“This community is unlike anything anywhere near here. … This airport is an absolute asset and a huge value to this community,” he said.

Caruso said it was “hugely important” for him to have the chance to stay at the airport.

“I bought this with the sole purpose to be able to fly to accounts I have in Prescott, Arizona, and for my son to have the opportunity to fly as well. … The confusing thing to me is all of us want to continue this and there is a middle ground somewhere where it would make sense for both parties. … Let’s crunch the numbers and let it make sense.”

Approximately 20 other hangar owners and airport users also expressed a desire for the city to either renew the leases or create new ones and that they were willing to pay a fair rent, even if it was more.

Williamson said the council has several options for what it could do with the leases. It could choose not to exercise the reversion clause and create new land leases for the hangar owners.

He said they could also allow the leases to end, take ownership of the hangars and then rent them back. Under this scenario, council members would set the rental rates, which are usually on a month-to-month basis.

Additionally, council could choose to rent the hangars at a reduced rate and make the tenant responsible for more of the upkeep or sell them and create new land leases with new tenants.

“Regardless, we will still make it work. … There are options (but) a decision has to be made at some point. … It doesn’t matter what you all decide, I’m going to do my damnedest to make it work for everybody,” he said.

Morris said the leases do not include any language about renegotiation, but any two consenting parties could renegotiate.

Because the meeting was a workshop, the council could not take any action, but some members did express their thoughts on the issue.

“I think it’s very clear that there is real interest in maintaining a healthy relationship with the city,” said Councilman James Howard Adams. “They (hangar owners) understand the need. I really hope that we, as a council, can come to a conclusion that … the majority understand … is to benefit the future while also supporting our general aviation community.”

Councilwoman Judy Hoskins said deciding how to proceed would be difficult, but she would consider everything and do what was best for the city.

“The reversion clause is not common to Boulder City,” she added.

All of the hangars with land leases expiring this year were leased through an agreement with the Nunno Corporation Ltd., a general contractor out of California. It built the structures and then sold or subleased them to other tenants, who took over the original contract for the land.

The initial agreement was for 20 years with a 10-year extension.