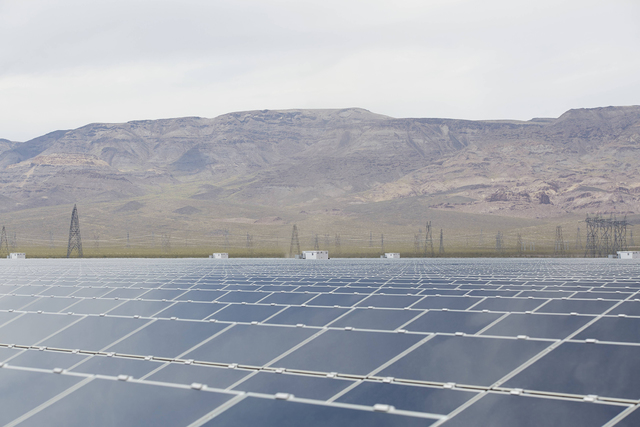 File A new study shows that the Copper Mountain solar complex, including Copper Mountain 1, owned by Sempra U.S. Gas & Power, will boost the state's economy by $2.5 billion over a 26-year period.

Boulder City stands to receive $201.6 million in revenue in the next 26 years from the Copper Mountain Solar complex in the Eldorado Valley, according to recent study referenced by Sempra Renewables.

Sempra Renewables owns the complex and recently announced it will produce more than $2.5 billion in economic benefit to the region’s economy over a 26-year period of which Boulder City’s revenue is a part. “Among the city’s nearly 5,000 acres now dedicated to solar facilities producing over 1,110 megawatts of power, Sempra has clearly been a leader, and the Copper Mountain Solar complex has been a standard of excellence in every way,” said Mayor Rod Woodbury. “The positive impacts on Boulder City residents largely go unnoticed, but they are substantial. Not only has the CMS complex created jobs for our residents, it helps generate a significant portion or our general fund revenue while keeping environmental impacts low and helping to maintain a buffer between our city and the metropolis over the hill.”

“This study validates the long-term economic benefits and additional new sources of revenue our project will deliver to the state and local governments,” said Kevin Sagara, president of Sempra Renewables.

Woodbury said the economy has also been helped by this partnership because it makes the area a healthy business environment that’s attractive to other industries. It’s also become a leader in renewable energy and other cutting-edge technologies. In addition to the revenue, Sempra gives back to the nonprofit and volunteer communities.

“Their team is professional in every way, always keeping us informed on current projects and engaged in their plans for the future,” he said. “I don’t have enough positive adjectives to describe the respect I have for the way they do business. They are consummate team players and partners, and I believe they feel the same way about our City Council and staff as well. If that partnership lasts for decades to come, as we all hope, then I see nothing but positives on the horizon for the future of Boulder City.” “Boulder City has been great a partner in this,” said Sempra’s Regional Director of External Affairs Lisa Briggs. “They’ve been great to work with.”

Briggs said they have no plans to leave Boulder City and will be here for long time.

“We’re there for the long haul … As the city releases more land, we’ll bid on it,” she added. “We would love to continue to grow in the Eldorado Valley.”

The study referenced by Sempra Renewables was conducted by the University of Nevada, Reno’s Center for Regional Studies and the University Center for Economic Development, College of Business and Ekay Economic Consultants. In terms of the entities affected by the project, it estimated the impact of growth in business revenues, employment and public sector revenues on Nevada’s economy.