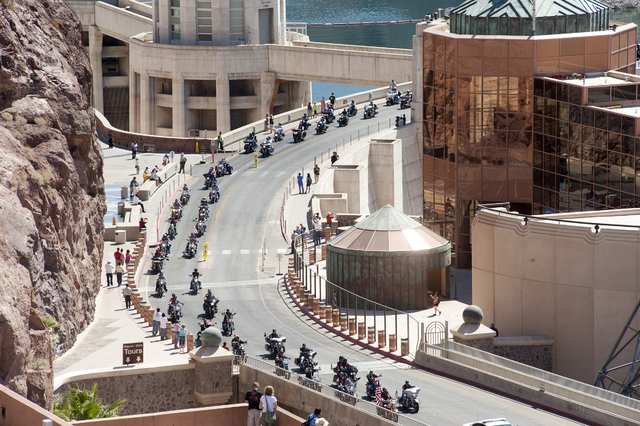 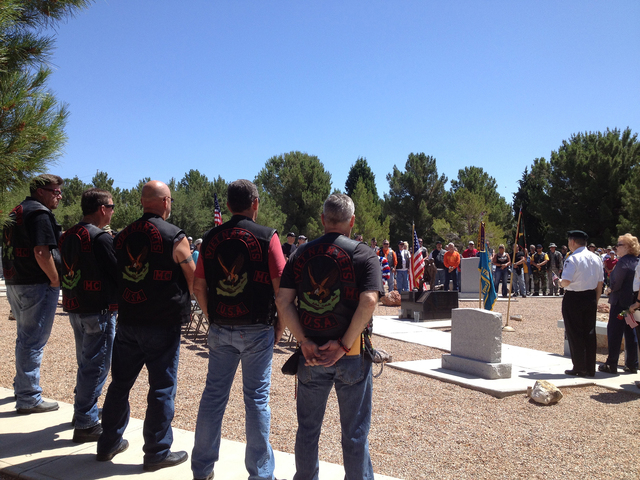 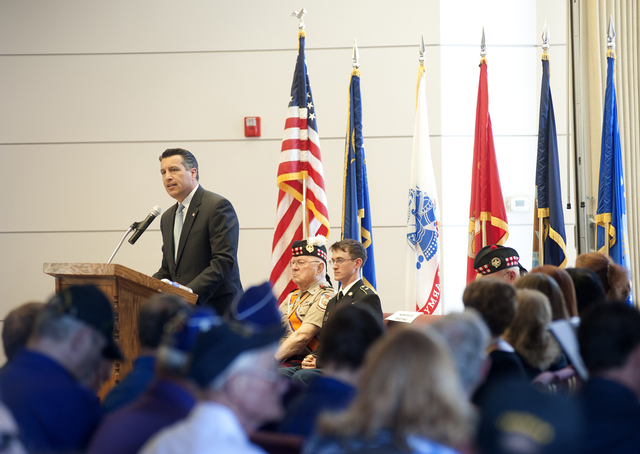 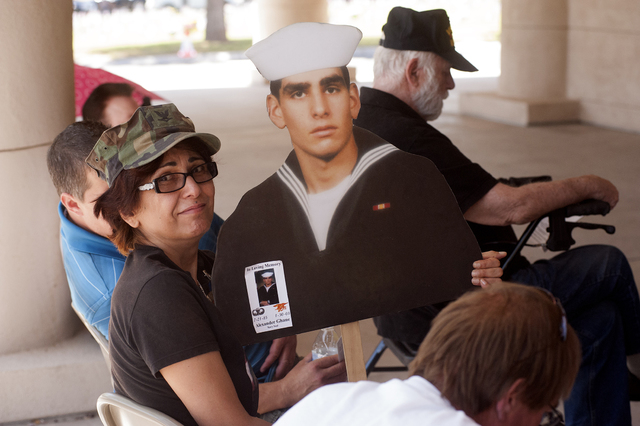 Memorial Day weekend was a kaleidoscope of differences with a single purpose.

Sunday morning, the members of Special Forces Association, Chapter 51, waited quietly and reverently at the center of the Southern Nevada Veterans Memorial Cemetery. Every flag was expertly lined up and flapping in the wind. The starch of their uniforms stood rigid and correct down to the smallest thread.

They waited quietly for the Vietnam Veterans and Legacy Vets Motorcycle Club to make their entrance.

The motorcyclists began their journey from the Arizona side of Hoover Dam for the 20th consecutive annual Flags Over the Dam ride. When they reached Boulder City their numbers had swelled to an estimated 2,000 of their fellow riders. Several clubs and manpeople not affiliated with any group made the trek to show their respect and to honor fallen warriors.

All of the Vietnam Veterans and Legacy Vets riders are former members of the Armed Forces.

While the denim-and-leather-clad riders were a stark contrast to the Special Forces group, the respect and honor was evident throughout the service.

Many of the riders were called single names or nicknames and chose to be addressed in that manner, while the Special Forces Group used their full names and rank and were all snap and polish.

“Larry,” the group leader for the ride, said he was touched by the amount of participation.

“This is the ride I look forward to every year,” he said. “Many years ago this ride started with eight people and we really appreciate everyone who came. There is no politics involved and we are just here to honor our fallen brothers. Anyone who is a veteran with an American-made motorcycle is welcome to participate.”

Wreaths were laid, 21-gun salutes performed and taps was played. When the tears were dried and the prayers completed with handshakes all around, the riders left the way they had come: roaring off into the desert sun having paid their respects to those who passed before them. Larry’s parting words were, “We’ll see you next year,” and with a hug and a handshake he and his riders were gone.

After the prayer, Curtis spoke eloquently about the fallen warriors of all services and reminded the small group of attendees that Memorial Day was not just a day to celebrate the latest casualties but all military members who had lost their lives.

Curtis was moved to tears by a letter he read from a soldier, who fell in combat, to the soldier’s 6-year-old daughter.

He told those assembled that at 3 p.m. they should pause for a moment as taps would be sounded throughout the city.

Tom Burke, a longtime Boulder City resident, played songs on his harmonica, which was made in occupied Japan.

Also performing were the Patriotic Singers youth ensemble, which sang “God Bless America” and “America the Beautiful” accompanied by guitar and violin.

Curtis said he felt that the multigenerational crowd proved that America’s young people are committed to carrying on the traditions.

Veterans from World War II through the current conflicts around the globe gathered Monday at Southern Nevada Veterans Memorial Cemetery to recall those who had lost their lives and pay tribute to their service.

Hosted by 777th Highlanders Post, Scottish American Military Society, the event was standing room only with the chapel and adjoining patios filled to near capacity.

With Gov. Brian Sandoval attending as well as various senators and congressional representatives, the event was the crowning jewel for the weekend of memorials and acknowledgements of our country’s military.

The somber mood was reflected by the bagpipes and pomp and circumstance afforded such an event.

Sandoval quoted Abraham Lincoln several times during his keynote address and declared 2014 to be the Year of the Veteran in Nevada. He spoke of a new veterans home coming to Northern Nevada and several interagency programs being spearheaded by the state. He said his goal is to make Nevada the most service-friendly state in the United States.

Staff Sgt. Mark Dowd, who served in Operation Enduring Freedom (the current conflict in Afghanistan), spoke of members of the service who did not return. Dowd closed with the oft-quoted phrase “for your tomorrow, we gave our today,” and the crowd was genuinely moved by his words.

A flyover by the Boulder City Veterans Pilot Group performing the missing man maneuver capped off the event.

At exactly 3 p.m., police sirens sounded throughout Boulder City for a full minute followed by the playing of taps and people stopping their activities to conclude the Memorial Day events.