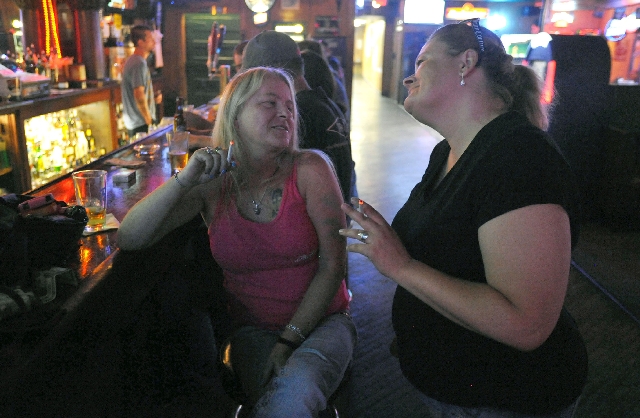 A proposed ordinance that would ban smoking inside businesses in Boulder City will not be before the City Council on Tuesday after all.

The Boulder City Smoke Free Air Ordinance was introduced to the council June 25. The ordinance was expected to be on the next council agenda Tuesday, but no “economic impact statement was done” for the ordinance, City Attorney Dave Olsen said, meaning the item will be held.

Olsen added that a public workshop to get community feedback will likely be held before the item returns to the City Council later this year.

The ordinance, first introduced in March 2012, was reintroduced by Olsen at the urging of the Southern Nevada Health District, American Lung Association, American Heart Association and the Cancer Action Network of the American Cancer Society.

Proponents felt the ordinance was “ready for council consideration” and asked Olsen “to place it on the agenda for consideration by the council.” Olsen added in an email that he has “not talked to community residents and/or businesses regarding this ordinance. I have been informed by the proponents that virtually every business that might be affected by the ordinance was contacted, including the Backstop and the Inner Circle.”

“The proponents claim that with the exception of the Backstop and the Inner Circle, most of the other businesses (motels, smoke shops, etc.) were, if not supportive, at least OK with it,” Olsen said.

Boulder City does not have casinos, gaming, nightclubs or strip clubs, businesses that would offer strong resistance to a smoking ban.

In the staff report supporting the June 25 introduction, proponents claim the cities of Mesquite, Incline Village and Carson City were considering “such an ordinance.” Olsen wrote, “I put that statement into the staff report based upon what I was told by the proponents.”

Andy Barton, city manager of Mesquite, said there is no ordinance like Boulder City’s being proposed for Mesquite.

Nichole Chacon, health educator for the Southern Nevada Health District, said nothing was in writing before those governments, but various organizations are working on getting something before those city officials.

“There isn’t anything that has gone before the council or put in writing,” Chacon said, adding Mesquite does have American Lung Association of Nevada community educators working “a grass-roots effort to work on an ordinance,” similar to the one being proposed in Boulder City.

She added that Incline Village and Carson City have received grants in the past few months to help these communities in their efforts to get to the point where an ordinance could emerge.

Amy Beaulieu, programs director for the American Lung Association in Nevada, said that since her group’s presentation to the City Council more than a year ago, “there has been great community support” in Boulder City for a smoke-free ordinance.

She noted that 14 weeks of ads in the Boulder City Review ran last summer and demonstrated support from Boulder City businesses, organizations and families supporting a smoke-free campaign. Beaulieu said these ads were sponsored by the lung association and the health district.

She went on to mention that postcards of support were signed by about 300 residents and/or businesses in Boulder City, two mailings went out to all addresses in town and a community breakfast was held in January.

Robert Shepard, a Montana physician and author of a paper on the relationship between smoking and the number of heart attacks in cities with smoking ordinances, spoke in Boulder City in fall 2012. He presented evidence on how the heart attack rate drops in a jurisdiction when an ordinance such as the one proposed for Boulder City goes into effect.

Beaulieu believed there was “an enormous amount of community activity” surrounding the smoke-free Boulder City issue during the past year leading up to the presentation of the ordinance.

Boulder City residents Lynn Goya and Beth Baker Vandenberg were employed by the American Lung Association in 2012 as community educators. Goya said she no longer works for the association but continues with volunteer activities supporting a smoke-free Boulder City. The grant for both salaries has ended, Beaulieu said.

While employed by the American Lung Association of Nevada, Vandenberg “personally hand-delivered the surveys,” prepared by the Boulder City Chamber of Commerce, seeking input from businesses affected by the ordinance, Beaulieu said. Those businesses never responded.

“They had their opportunity and chose not to,” Beaulieu added.

Kurt Erick, 20-year owner of the Backstop, one of the businesses that would be affected should the Boulder City ordinance take effect, is a nonsmoker.

“I say, let capitalism runs its course,” Erick said. “If people don’t want to come in here (because smoking is allowed), I would have to change my laws that way. Don’t let the federal government or local government or any government tell me what to do. Eighty percent of my customers smoke. That’s one big reason why they come in here.”

Erick felt the ordinance came from non-smokers trying to force smokers to do “what they want” and not considering the opinion of smokers.

The Backstop’s owner expressed concern about why the city would want to enact this ordinance when it would affect only three local businesses, including his. He felt it looked as if these businesses were being “targeted” by this law.

Brett Caruso, owner and manager of the Inner Circle, which would be affected by this ordinance, did not return calls seeking comment.

Beaulieu said that if the Boulder City ordinance passes, “it would be fantastic. It would be the first smoke-free city in Nevada and Nevada is the only state … that doesn’t have local ordinances right now, and it would be stronger than the statewide law.

“Talk about your protection for the workforce that’s there. What a way to show that Boulder City is a leader.”