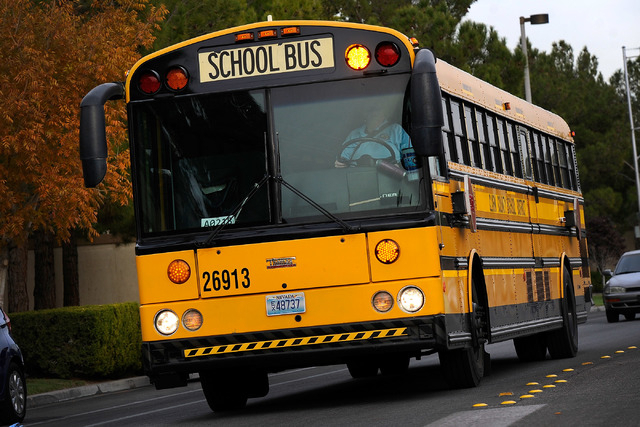 Slow your roll; school’s back in session

Boulder City Police are joining with other law enforcement agencies to remind the public that school has started and it’s time to “Slow Your Roll.” Time to get prepared for the onslaught of excited students rushing to see their friends, meet their teachers, and exert a little “independence” from the parental unit. It’s time to change your driving habits and prepare for periodic heavy traffic in school zones or various points along the way. Drivers and parents play an important role in enhancing safety by obeying traffic laws and speed limits, not passing other cars or making U-turns in school zones, and avoiding double parking and stopping on crosswalks. Red zones are no parking zones any time, as well.

If a driver receives a citation in a school zone, fines are doubled. That’s double the incentive to pay attention. Not to mention, those little shavers are generally so excited to get back and get involved they are more likely to make mistakes, and if you aren’t paying attention — it can be deadly. The Back to School Campaign this year is “Slow Your Roll” — and keep your eyes open.

Assist Other Agency: The caller knows the coordinates where they are stuck but has two children with him and doesn’t want to pay a huge amount for someone to come get them unstuck at 11:24 p.m. in the area of Dutchman’s Pass and Horizon Drive.

Thought for the day: If you are “exploring” in the desert it’s a good idea to have friends that can respond in case of emergency.

Aug. 19. Threats: The caller states she has received a threat over the phone but cannot remember the threat or who made it at 2:23 p.m. in the 800 block of Cheryl Lane.

Fraud: Subject flees the area when the fraudulent check doesn’t make it past the clerk at 4:59 p.m. in the 500 block of Avenue G.

Thought for the day: That driver’s license left on scene might just make the getaway a little more difficult.

Aug. 20. See Person: Subject reports the check he deposited in the ATM is not even close to the amount the machine reported at 2:49 p.m. in the 1000 block of Arizona Street.

Robbery: The caller reports a man with a large dog came in, stole money and fled in a silver Suburban at 6:11 p.m. in the 100 block of Ville Drive.

Thought for the day: Not sure I have heard of using a dog for a “weapon” in a theft but I know it would convince me.

Aug. 21. DUI: One more subject will be visiting Henderson City Jail to sober up and the party has cost WAY more than expected at 2:38 a.m. in the 700 block of Nevada Way.

Animal: Two dogs are visiting the neighbors but no one appears to know them at 5:12 p.m. in the 800 block of Dianne Drive.

Thought for the day: Thanks to those of you who call to have our pets sheltered where they are safe until their owners arrive.

Suspicious: The female reports that an unknown male walked into her home carrying beer and would not leave until she threatened to call police at 2:03 p.m. in the 600 block of Eighth Street.

Thought for the day: Keep your doors locked at ALL times folks — this could have ended badly.

Aug. 23. Assist Other Agency: Officers are able to detain two suspected burglars after a victim followed them from Henderson and into our jurisdiction at 3:16 a.m. in the area of mile marker 11 on U.S. Highway 93.

Burglary: A report of several valuable items taken at 10:18 a.m. in the 1600 block of Nevada Highway.

Thought for the day: The victim of this burglary took a lot of chances following these suspects — use the phone and let us do the dangerous stuff.

Aug. 24. Fight: Two males decide to settle their differences the old-fashioned way and walk away bruised, battered and satisfied. The point was made at 12:08 a.m. in the 1600 block of Nevada Highway.

Traffic: The vehicle stops and starts in the roadway and then jumps the curb entering the parking lot at 3:37 p.m. in the 900 block of Adams Boulevard.

Thought for the day: Not a great idea to drive yourself to the hospital when having severe pain; we will be happy to provide you with transportation.

Call of the Week: Traffic Stop: Officers attempt to stop a vehicle driving recklessly at over 100 mph. The occupants of the vehicle abandon it in the parking lot and head off on foot, but are quickly apprehended and some bad folks and dangerous items are off the street at 8:52 p.m. Aug. 19 in the 1800 block of U.S. 93.