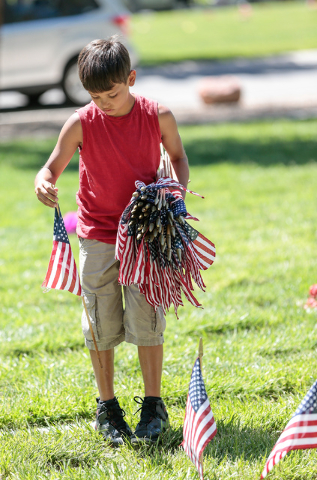 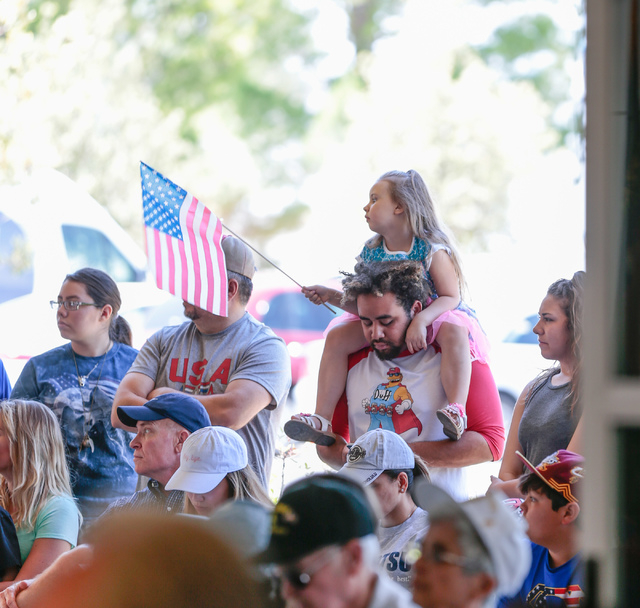 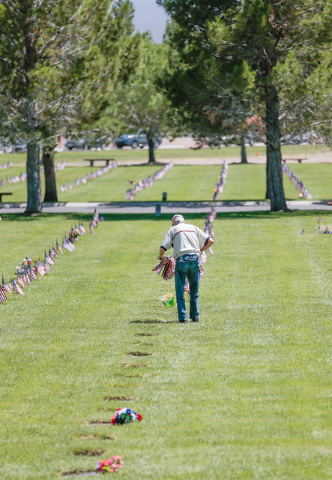 Hundreds of citizens from all over Southern Nevada, including many veterans and their families, filled and surrounded the chapel at the Veterans Memorial Cemetery on Monday, for the Nevada Veterans Foundation’s annual Memorial Day ceremony.

The service featured contributions by a plethora of veterans groups, including the Veterans of Foreign Wars, Nevada Department of Veterans Services and many more, honoring those who gave their lives in service of the United States.

Keynote speaker Peggy W. Kearns, director of the Veterans Affairs Southern Nevada Healthcare System, spoke about the inception of Memorial Day, after the Civil War, and how the day has since grown to honor those who have sacrificed in all U.S. wars.

“My dad and uncle were in the armed forces, so we make it a point to come out here every year, to pay our respects,” said Alexis Holguin. “This is our 13th time, and each year its incredibly beautiful and moving.”

“Growing up my dad always made sure to emphasize paying respect,” Holguin said. “A lot of people celebrate with barbecues and parties, but for us it’s more about remembering the sacrifices. It’s why we’re able to be here today.

In addition to the guest speakers and words of thanks the was music filling the air, as the Grand Opera Society of Las Vegas performed a selection of patriotic songs, including “Requiem for A Soldier” and the “Armed Forces Medley,” and the somber bag pipes of the Catholic War Veterans Color Guard accompanied the presentation of colors with a rendition of “Amazing Grace.”

The service came to a close with a 21 gun salute and a flyover by the Boulder City Veterans Pilot Group, in a “missing man formation.”

More than 35,000 veterans have been laid to rest in the cemetery and on Memorial Day each of their graves was adorned with a small American flag, after the VFW and a hundreds of volunteers spent Saturday morning decorating the plots.

According to VFW Past State Commander Robert Garlow, the Veterans Cemetery in Boulder City, established in 1993, is one of only two such state-funded burial sites in Nevada, and the only state-funded cemetery in the country with its own chapel, which was generously donated from private funds nearly 20 years ago.

After the ceremony, dozens of volunteers remained to collect the flags from the graves, among them were the Southern Nevada Devil Pups, who carefully rolled up 27,000 flags for storage until Veterans Day.

“The Devil Pups are a youth program, now in its developed to send these kids to Camp Pendleton, the Marine Corps base in San Diego,” said Youth Leadership Authority President Marie Tomao. “They do physical training every weekend at Sunset Park, with reservists, and this weekend alone they have done about 24 hours of community service.”

Earlier in the morning at the Boulder City Municipal Cemetery, the American Legion, adorned in red poppies, sat in silence as Air Force Chaplain Jason Klodnicky spoke about the military heroes in his life.

Klodnicky’s speech at the American Legion’s Memorial Day Ceremony was about walls. The walls that prop up and create a place in history for the veterans that sacrificed there lives, but Klodnicky was not just talking about the walls of the Vietnam Memorial. He was talking about the wall we put up in remembrance and pride for the ones we love.

“When you look at the flag today or think about the men and woman who sacrificed for this country I want you to think about your memorial wall,” Klodnicky said. “Think about the people who have sacrificed and served for you, and think about whose wall you may be on, because the soldiers we thank today were on someones personal wall as well.”

The small crowd remained stoic throughout the event, never once forgetting the reason they were there. The ceremony ended with a song from veteran Tom Burke. He and the rest of the audience joined in to sing “The Battle Hymn of the Republic.”

“Ditties like these remind us of all the soldiers who have sacrificed since the Civil War,” Burke said. “It is an honor to sing this for you today.”

The men and woman of the American Legion sang along, never missing a beat or a word.

“Glory, glory, Hallelujah!,” they all sang, as veterans and civilians alike remembered the trials and tribulations our men and woman of the military have taken on our behalf.