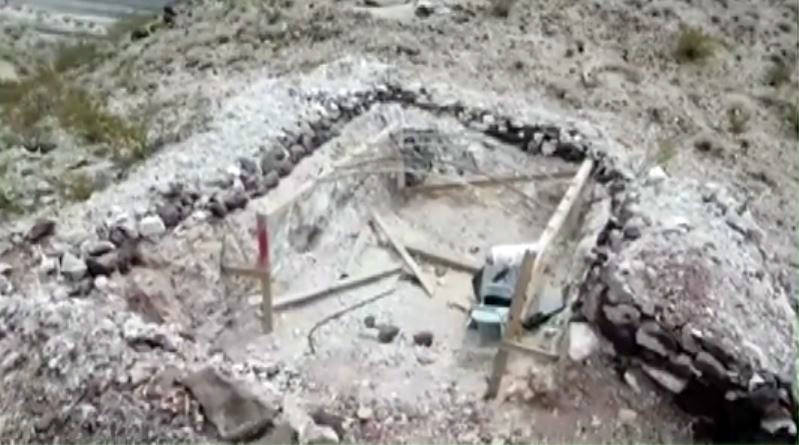 (Boulder City) This homeless camp is one of 11 that Boulder City Police found in the desert between Cascata Golf Club and Railroad Pass Casino. The shelter had been dug into the ground and a roof was partially installed.

In the past year, city staff have found evidence of 16 homeless encampments in undeveloped areas of town.

According to Police Chief Tim Shea, five abandoned camps were found in a 50-yard circle in the desert area near the Boulder City Animal Shelter and 11 were found between Cascata Golf Club and Railroad Pass Casino.

One of the encampments included a shelter dug into the ground with a partially installed roof.

Homeless task force leader and Parks and Recreation Manager Julie Calloway said that camp looked like no one had been there for a while.

“I think one of the things we were all surprised over and we’re still finding out is the scope,” Shea said. “It was far, far more than we knew.”

The public works department has to have staff come clean up garbage, human waste and other items that have been left behind at the encampments, he added.

Both Shea and Calloway discussed these issues and efforts during the Jan. 28 City Council meeting, where she said that the problem “is a challenge of national proportion” and there is no quick fix to resolve it.

“We definitely realize we cannot work our way out of this by law enforcement alone,” she said. “Putting these individuals in jail is not helping them. Just like providing food or a bed in one night will not really help the problem, as well. We have realized that it is really wraparound services (that) are needed for these individuals because it’s not just a one fix for them.”

The homeless task force was organized in August and includes 11 members from city staff, the police department and the court system. Calloway said it has been working to treat everyone fairly when enforcing city codes and laws as well as state laws and ordinances.

“ … we’re trying to approach them just like we would a Boy Scout or a Girl Scout group that’s camping in the desert,” she said. “That’s not allowed, so we’re trying to treat everybody equally.”

The city also recently found out a man, Richard Roman, had been living in a mine shaft for seven years. He was given a 30-day notice to leave and the city worked with HELP of Southern Nevada to help him find an apartment. Roman moved out before Jan. 18, is staying with a friend and expected to move into a new home in March.

She said they would and that HELP of Southern Nevada would also be involved to find out what services were available for the different individuals.

At the meeting, Mayor Kiernan McManus thanked Calloway and staff for their work but said he was concerned practices were being established and policy was being created by without input from City Council.

McManus also encouraged staff to work with Clark County and have local efforts be seen as supportive of theirs.

“I think that Boulder City always needs to be cognizant that we are a part of Clark County,” he said. “That’s oftentimes a benefit for us, but we need to be seen as part of what the effort is and not as an organization or community that has simply decided how things are going to be and every once and a while we reach out to Clark County and say we need help with this or taken care of this for us.”

According to Calloway, there have been no policy changes yet.

Clark County took a homeless census Jan. 30, which is a point-in-time count of people in that situation. Communications Manager Lisa LaPlante said the city has received very preliminary results that show there were 18 homeless sites and 10 people, who were willing to answer questions about their situation on the census day. She also said Clark County still needs to approve those numbers.