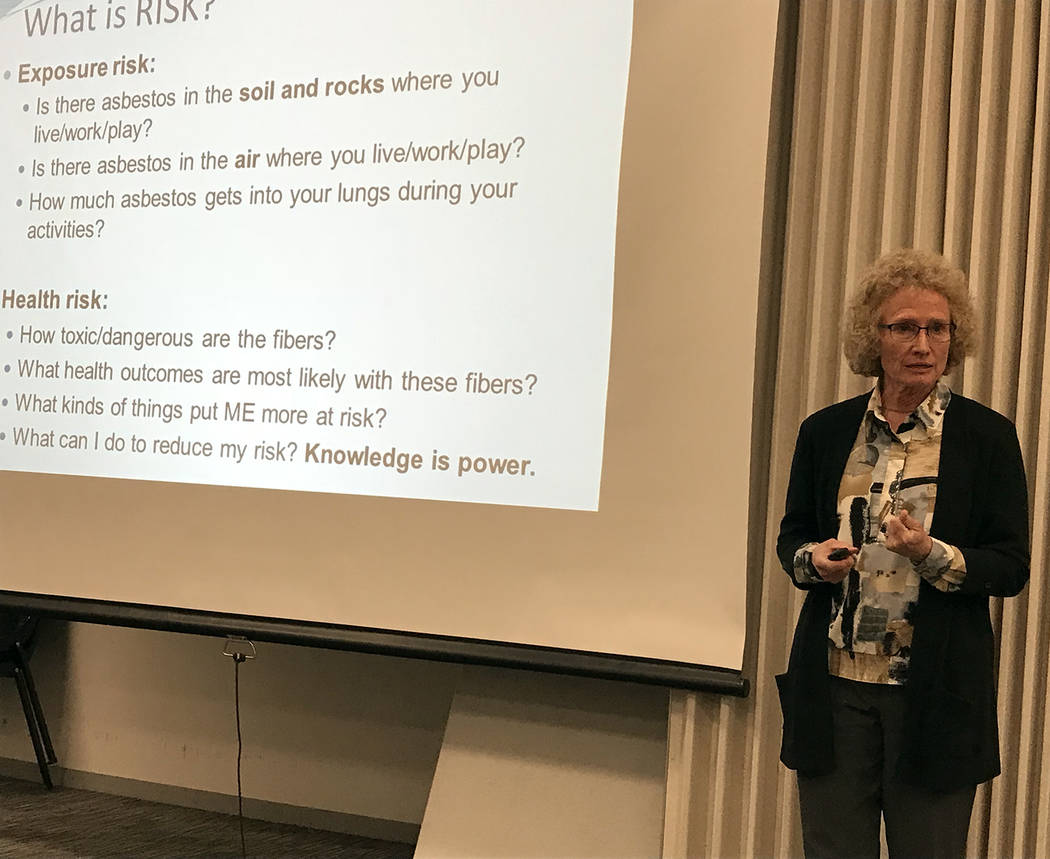 Hali Bernstein Saylor/Boulder City Review Jean Pfau of Montana State University shares findings about her study of the affect of asbestos fibers on mice during a special presentation at the Boulder City Library on Nov. 30.

Scientists involved in the study of naturally occurring asbestos in Southern Nevada and nearby Arizona have concluded that exposure to the fibers should be kept to a minimum after tests on mice show they can contribute to pleural disease.

“Low exposure caused health effects in mice, suggesting that we cannot dismiss low environmental exposures,” Jean Pfau of Montana State University said during a presentation Nov. 30 at the Boulder City Library. “We can no longer say there is no health risk.”

Her study looked for immune system autoantibodies and inflammation in mice after they were injected with amphibole asbestos fibers collected in Arizona and Libby, Montana, as well as a control group that was injected with saline. Her test involved 40 mice, with 10 to 20 in each comparison group.

The Arizona fibers were collected in Wilson Ridge near Lake Mead by Brenda Buck and Rodney Metcalf, the two geologists from UNLV who first discovered naturally occurring asbestos in and around Boulder City.

Pfau gave the mice just 3 micrograms of each substance, and in all cases, the mice showed an increased frequency of autoantibodies and inflammation.

At four months, the mice showed equal percentage increases in autoantibodies from the saline and Libby amphiboles, but a higher percentage from the Arizona amphiboles.

At seven months, the percentages had continued to increase and were nearly double for the mice exposed to the asbestos fibers from Arizona.

Inflammation showed similar effects, but the amphiboles from Libby were greater than those from Arizona, she said.

Scar tissue in the lungs was nearly identical from all the substances injected into the mice, with those receiving saline just 1 microgram lower.

Pfau also said that mesothelioma, a cancer known to be linked to asbestos exposure, is rare and that pleural disease is much more common and would be a better way to measure the toxic effect the fibers have on people.

Buck said they have continued to sample soil in the area and are finding naturally occurring asbestos exactly where they predicted it would be. Additionally, dry and windy conditions in Southern Nevada are moving the asbestos fibers to areas they did not expect.

“We need long-term measurements for what’s in the air,” Buck said.

She added that Environmental Protection Agency and Occupational Safety and Health Administration regulations may not be detecting small enough concentrations to determine accurate risks to people’s health.

Doug Merkler, of Boulder City, a founder of the Boulder City Citizens’ Action Group on Naturally Occurring Asbestos, which sponsored the program, said the presentation was designed to inform citizens and increase awareness of the study, as the researchers plan to reapply for a grant to measure asbestos concentrations in the air and how they are affected by off-road activities that was turned down earlier.

Merkler said citizen involvement was a key component of the next phase of study.

“It may drop property values, but the health of our kids is more important,” he said about the results of Pfau’s study.