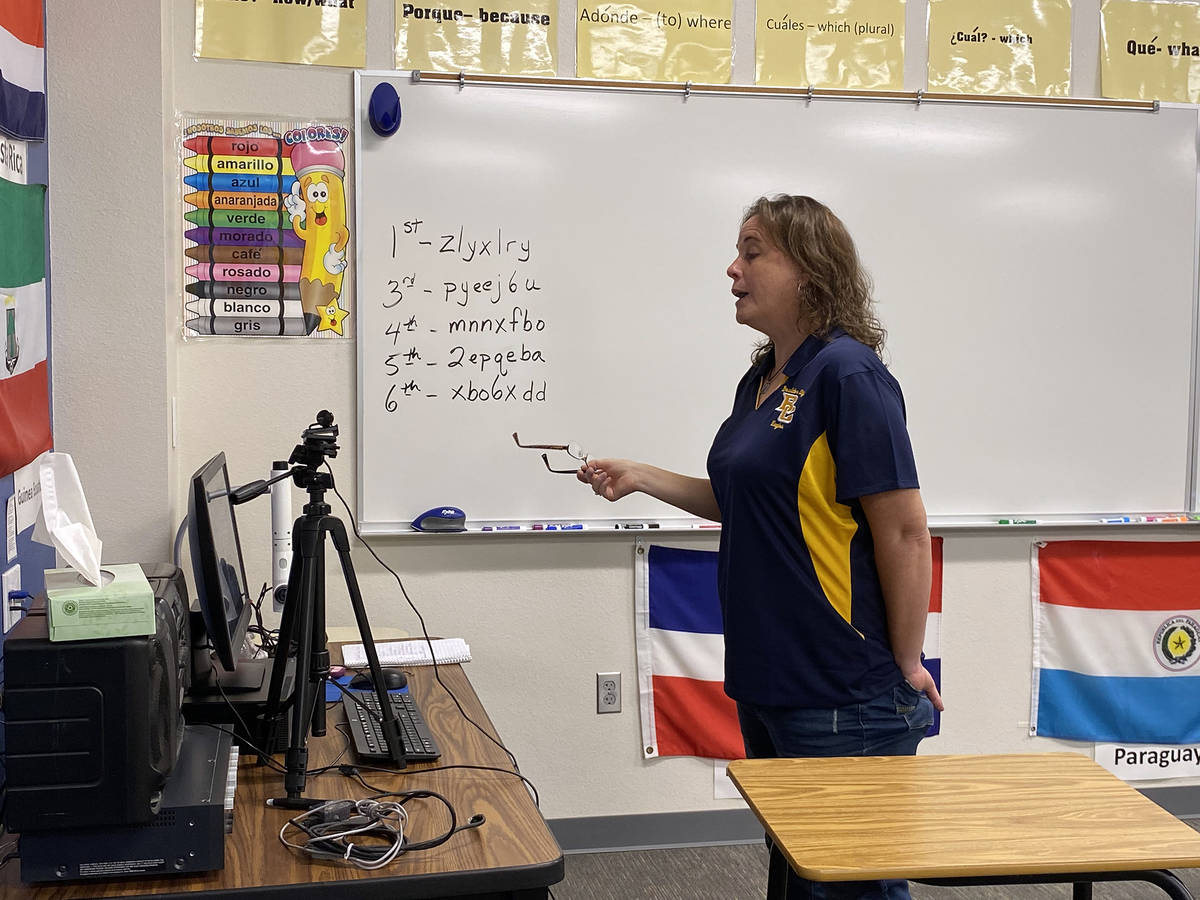 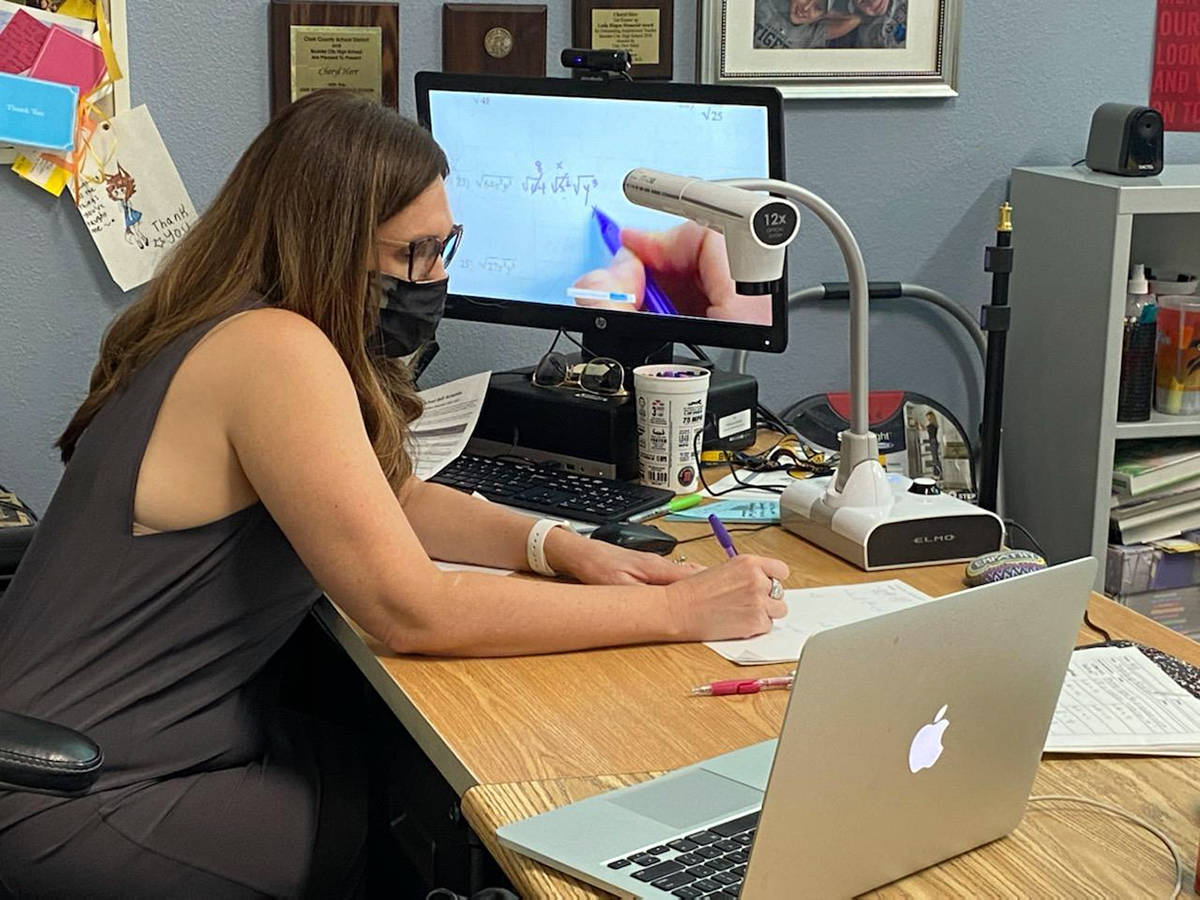 Students began the 2020-2021 school year Monday, Aug. 24, attending classes completely online and dealing with some technical difficulties early in the day, which were quickly ironed out.

Clark County School District and parents reported problems with Canvas, the learning management system, crashing and not working as classes began; however, those problems did not seem to stop the instruction from happening.

“We actually didn’t have too many issues; the only one was first thing in the morning,” said Lacey Leyman-Scarpa, whose daughter, Monika Arroway, is a sophomore at Boulder City High School. “She missed her entire first period class between Canvas and Google Meet … crashing and then not able to actually access the class. The rest was pretty smooth.”

Principal Amy Wagner said most of the issues were resolved by the middle of the day.

“We stressed to teachers that the most important thing was to connect with students on Monday and welcome them back,” she said. “Parents and students were encouraged to call our office if they had issues getting connected.”

The district approved starting the school year with distance learning rather than students going to a physical classroom in order to prevent the spread of COVID-19.

Tiffany Gulbransen’s son, Ryan Gulbransen, is a freshman at the high school. She said the only problem he had was in the morning.

“My son logged into Canvas and his first period (class) 10 minutes early and was the only one there,” she said. “Halfway through second period he was finally connected. The rest of the day was fine.”

Mitchell Elementary School Principal Benjamin Day said the problems with Canvas were the “biggest issue” of the day for the students, but his staff was able to provide Google Meet links to the parents so they could access the online classes.

“The first day really went well with all things considered,” he said. “There were certainly bumps in the road with technological issues, which is to be expected when embarking on a whole new way to teach and learn, all while having to rely on machines to do the jobs they are designed to do. At the end of the day, though, the vast majority of our students were able to connect with their teachers and we were ultimately able to solve most of the technological problems, so I was happy with how everything went.”

Melanie Teemant, principal of Garrett Junior High School, said they were prepared for the day to start with technical issues.

“Although Canvas was down we had a great back-up plan so we were able to get kids on right away, and had a whole team in place for parents to ask questions and get help if needed, so their student could be on within the hour.”

“The teachers and staff have been amazing,” said Katie Lynn Parrish. “We had a good day overall and today (Tuesday) was even better. The biggest struggle is having multiple children in all different levels and different apps, emails, Canvas versus Google Classroom and a toddler.”

Parrish has a seventh grader, fourth grader and first grader.

Jessica Hill agreed with the “amazing” efforts put forth by teachers and students.

“They both have shown such resilience and patience. I am impressed at how quickly they have adapted,” she said.

“My son is in special education at King and even he is doing really good. His teacher has been great. She has been adaptive, creative and patient as well. Teaching a group of special needs children how to operate a computer is not for the faint of heart,” Hill said.

After dealing with issues logging into the system at the start of the day, Barbara Muller, commended teachers for how they introduced students to their new form of education.

“Once logged in, the teachers were very understanding and tried their best to let the students know it was going to be different this year as no one has ever done distance learning in such large masses,” she said. “Teachers are doing their best to collaborate with other teachers and be creative with courses that require more hands-on and equipment usually supplied by the school.”

Her son, Zachary, 15, is a sophomore at Boulder City High School.

She also said the food service staff is doing a good job, especially working outdoors in the heat.

Day said he is confident things will get better as the school year moves on.

“I expect things to go more smoothly and to be a little easier each day as we continue to learn how to navigate uncharted territory,” he said. “We are very fortunate to have such a wonderful, patient and supportive group of parents and community members working with us on this, which is particularly vital when working with students who are 3 to 8 years of age.”

“This first day of school was unlike any other I have experienced. … It was great to see students’ faces again when I joined their classes and they seemed happy to be in classes with their friends and our teachers,” she said.

She said there was an 81 percent attendance rate for the first day of school, but that did not include students who emailed their teachers or would be doing the classes later in the day.

“If students were not able to log on, they were asked to email the teacher. … Virtual attendance allows for teachers to have added flexibility and they can edit the attendance when an assignment may be completed later in the evening,” she said.

Jason Schrock, principal at King Elementary School, said he is proud of his staff and how they coped with this “brand-new way of teaching for us.”

“What they learned and developed, in regard to distance learning, in a short period of time is something that we can all really be proud of. Despite a few hiccups with technology, I consider the first two days a big success. I’m truly excited to see how we grow and improve as educators and as a community of learners over the next few weeks.”

Schrock said several parents also sent him messages complimenting the staff for their efforts and how much their children enjoyed their time at school.