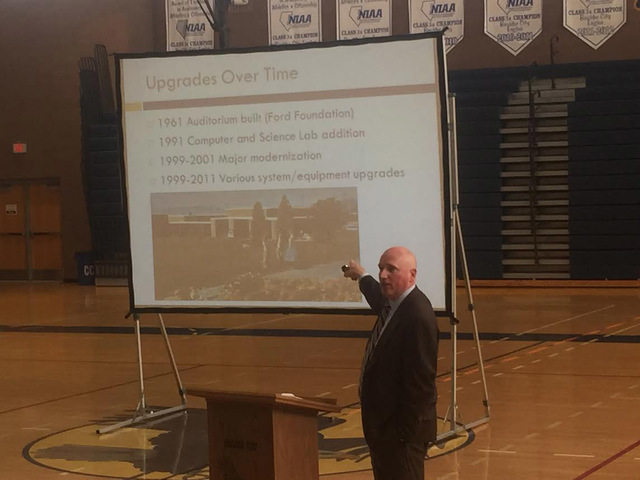 As the school year reaches its final days, so does the high school school that has called Boulder City home since 1950.

The 300 building and two-thirds of the 200 building won’t be standing once the next school year starts, according to Principal Amy Wagner. Construction of the new classrooms will begin in September, and those displaced by construction will be in portables.

Clark County School District officials and other representatives gave an hourlong presentation to a few parents and community members inside the school’s gymnasium May 6 to discuss the progress of the new Boulder City High School.

The new classrooms, which sparked controversy from teachers and community members, are 13 years in the making.

Boulder City High was selected for a phase-replacement in 2003 after talks of a one-time replacement fell through, according to the district’s Chief Financial Officer Jim McIntosh. The district approved $36.5 million for a new gym and library at Boulder City High as part of the 1998 bond program.

The voter-approved program allowed the district to borrow money for various school improvements in Clark County, McIntosh said. But as the bond reached its denouement in 2008, so did the funding, leaving Boulder City without the money to cover the three remaining phases it was promised.

After going a decade with outdated facilities, the school board approved $16.4 million in October to fund the new classrooms as part of the school’s second phase.

The news was troublesome to an assortment of teachers and community members who started an online petition against the changes and expressed their concern by writing letters to the Boulder City Review. Their main gripes were overcrowded classrooms, an absence of windows and a lack of tradition.

Mark McGinty of SH Architecture, the company in charge of designing the school, said the new Boulder City High School will not be “cookie cutter.”

“These classrooms are very well engineered and very well thought of,” he said. “There were studies back in ‘98 that showed if you give your children natural daylight, they will test 20 percent better.”

According to McGinty, the remodeled school also will feature several historical characteristics. The flag pole at the front of the school will still line up with the U.S. Bureau of Reclamation Building, and the new roof will be high-sloped to give the campus a retro feel.

“I think a lot of people are sad it couldn’t be retrofitted and continue to look the same, but function better,” parent Amy Garcia said.

Amy Tobler, another parent, said she understood the frustration of those who wanted to salvage the current school, but said the changes had to happen.

“It’s kind of sad. It’s going to affect a lot of people having it gone, but it’s old,” she said. “You can’t please everyone, and overall I think they did a great job.”

McIntosh said he’s hopeful the district can break ground on the two remaining phases shortly after the classrooms are completed in 2016.

A new performing arts center and field improvements are the last two upgrades that need to be finished. McIntosh said he’s confident the school won’t have to wait another decade to get them done.

Wagner said a community tribute will be held June 12 so former students can pay their final respects to the school before it’s torn down. They will be able to write their names and memories on the school, and a barbecue will be held so they can celebrate the buildings they cherish.

And even though it should have happened years ago, Wagner said she’s glad the district is finally following through on its promise.

“I’m excited for the community, for the school and for our students. It’s been a long time coming,” she said.

Demolition of the administrative building, 100 building and the rest of the 200 building is expected to begin in June 2016.