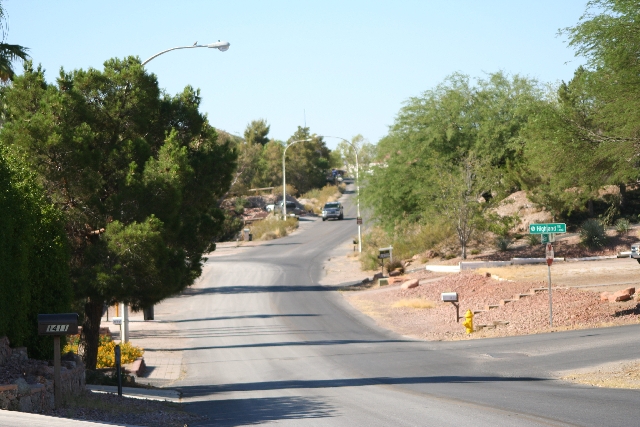 A proposed public works project to install sidewalks along San Felipe Drive was met with mostly vocal opposition at a community meeting June 12.

The meeting, at Boulder City Library, was hosted by the city’s public works department in an effort answer questions about the project and collect feedback from residents.

About 30 people attended the meeting, most are residents of the affluent San Felipe Drive area.

San Felipe Drive is considered a rural area and the road is paved, but has no sidewalks for most of its length.

Hansen told the group the sidewalks would improve safety for pedestrians, noting that the city’s strategic plan identified the improvement of pedestrian and bicycle paths as a goal.

He also told residents he lives in the area, and sometimes while driving is startled by pedestrians in the road, and startled by cars when he is walking or riding his bike.

However, most in attendance did not seem to share Hansen’s concerns.

New York Times best-selling fantasy novelist Terry Goodkind said he and his wife have lived on the street for 12 years and never been startled by a car while walking.

“We like it the way it is. Can’t you leave it the hell alone?” Goodkind said to Hansen.

Goodkind asked Hansen if the city had conducted any studies regarding the need for sidewalks, and Hansen replied it had not.

After the meeting, Goodkind told the Boulder City Review, “We like living there because it is a nice, quiet beautiful area and we don’t want to turn it into a tract area.”

Lee McDonald, a 28-year-resident of San Felipe Drive, said he also opposed the developed aesthetic sidewalks would bring to the area.

“If I we wanted to live in a tract, we would have moved into a tract,” he said after the meeting.

Leo Doyle, who also has lived on San Felipe Drive for 12 years, expressed concern that constructing sidewalks would give vehicles a false sense of security, allowing them to drive faster, and creating more of a hazard for pedestrians.

Doyle suggested that if sidewalks are built, that stop signs also be placed along the road.

“You go fast in front of the house, you’re going to kill someone,” he said. “What’s it going to take to slow it down?”

However, not all were opposed to the project.

Peter Huntoon spoke up in support of the sidewalks improving pedestrian safety.

“I just want to get people off the streets. I don’t care how fast the cars are going,” he said.

The cost of the project and source of funding was also a concern for some.

Hansen said the project could likely be funded by the Regional Transportation Commission and built in phases in odd-numbered years.

It appeared at the meeting Hansen estimated the project’s total cost at $500,000 to $1 million, but in a follow-up interview June 13 he clarified, stating he had been referring to the individual phases.

Hansen told the Boulder City Review he estimates the cost of the entire project, which would include a repaving and possibly the replacement of underground utilities, to be $2 million to $4 million.

“We haven’t done any detailed cost estimates because I don’t know if we have a project yet,” he said.

When a woman asked Hansen how much had already been spent on the project, he replied, “not much,” and stating he did not have the figures on hand.

Hansen told the Boulder City Review the following day that about $10,000 from a 2011 RTC grant had been spent to design the aerial renderings.

However, a full engineering study has not been conducted, leaving some questioning the feasibility of installing sidewalks along the narrow, winding San Felipe Drive.

Others were concerned about the sidewalks cutting into their front yards, many of which Hansen said are built out into the city’s right of way.

“This will be a very challenging project, but we will work with everybody,” Hansen told the group.

Hansen later told the Boulder City Review he felt that while he got “beat up,” at the meeting, there was also support for the project.

“People feel there is a need to improve the pedestrian facility out there but at the same time they don’t want to give up anything they have,” he said.

He told the Boulder City Review that he thinks the project is the right thing to do, but it is too soon to say whether it will go through.

“What I’d like to do is get more feedback. It seems like at those public meetings, the people who want to fight the government find it easier to express themselves,” he said. “I’d like to have a good representation of the entire community out there … I’m not going to push any projects on them they don’t want, that’s for sure. I do work for them.”