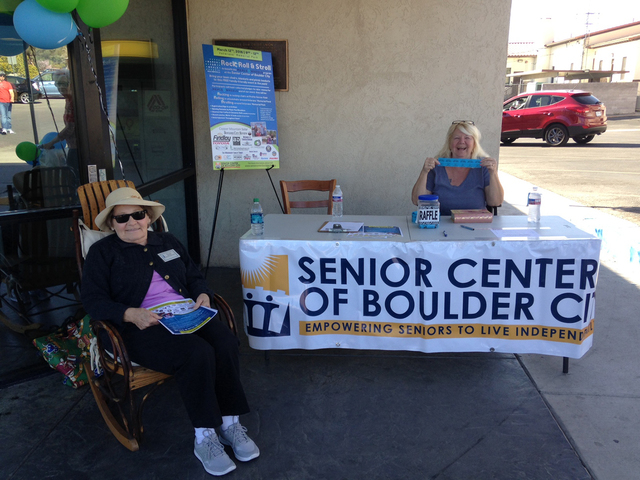 Rock and roll isn’t just for the young.

If you need more proof, head over to Veterans’ Memorial Park on Saturday as people of all ages will be rocking and rolling. They’ll also be strolling as the Senior Center of Boulder City presents its inaugural Rock, Roll &Stroll.

Scheduled from 9 a.m. until 2 p.m., the event is a benefit for the center’s Meals on Wheels program. It will feature people rocking in rocking chairs at Pratte Soccer Field, rolling in wheelchairs around the park’s pond, and strolling through the park on a designated path. For each activity, participants have been asked to collect pledges to raise funds for the center’s nutrition program for homebound seniors.

“You do not need to have pledges to come,” assures Susan Johnson, president of the senior center’s board of directors. “Just come and enjoy a beautiful day.”

The benefit is family friendly and people are welcome and encouraged to bring their pets. Johnson said she hopes to see many people strolling with their dogs.

All of the rocking chairs and wheelchairs will be provided by the senior center for the event, with volunteers from several groups at Boulder City High School helping supervise or offer assistance, if necessary, at each of the activities.

Balloon bouquets will designate each activity station, she said.

A committee has been working on the first-time fundraiser for about a year, with most of the work done since August, Johnson said.

They learned about the event during a webinar to promote March For Meals, a nationwide campaign sponsored by the national Meals on Wheels organization to raise awareness of the nutrition program and the vital service it provides.

Not only does the program bring food to those who cannot leave their homes, it provides a link with a real person who checks on the seniors’ well-being.

According to Johnson, a similar event had been held in Arkansas and was very successful and she felt it would be ideal for Boulder City.

“We talked about doing a project to benefit our Meals on Wheels when we did our ice cream social and community champions last year,” she said.

It costs the senior center about $210 a day, or $76,650 a year, to provide meals to those who are unable leave their homes. This is in addition to the approximately $155 a day the facility is reimbursed by Nevada’s Aging and Disability Services Division.

Councilwoman Peggy Leavitt, who is vice president of the center’s board of directors and co-chairman of the benefit, said they serve about 60 clients a day through the Meals on Wheels program. Hot meals are delivered each weekday, with frozen meals for the weekends delivered on Fridays.

The Senior Center of Boulder City is a nonprofit organization. It receives financial support from state’s Aging and Disability Services Division, Boulder City and the United Way, but relies on donations and fundraisers for a good part of its operational costs.

“The main thing is we appreciate the support. The community has been generous,” Johnson said.

There will be entertainment throughout the event and Marcela Fastow is serving as emcee.

An opening ceremony at 9 a.m. will start the festivities.

A food truck will be on site offering things such as chili, sandwiches and hot dogs. Cinnamon rolls and gourmet coffee also will be available. Those attending are encouraged to bring chairs, blankets and picnic baskets.

Those interested in participating can obtain pledge packets on the center’s website, www.seniorcenterbouldercity.org. Additional information is available by calling the center at 702-293-3320.