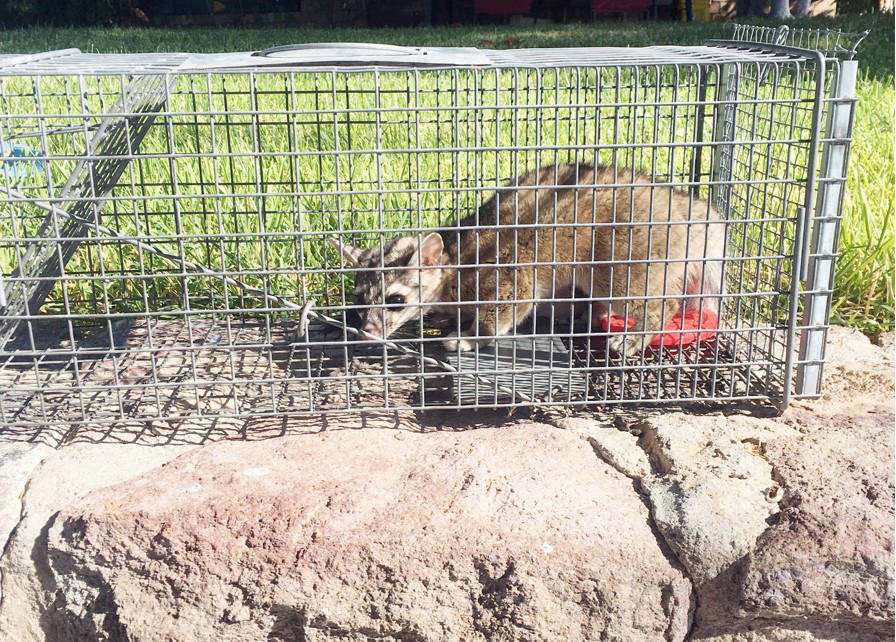 (Michael Nix) Michael Nix had an unexpected visitor at his Boulder City home: a ringtail. After trapping the animal, he turned it over to Boulder City Animal Control, which released it to its natural habitat.

The nocturnal mammal, a relative of the raccoon, has been running along power lines and coming into his home for a few weeks before being caught.

Nix said he was alerted about the intruder by his dogs.

He set up a video camera to see who was visiting at night and was surprised when he saw the ringtail staring back at him one night.

Although he said he appreciates the efforts of the animal in “getting rid of rodents,” he didn’t feel comfortable sharing his abode.

“They’re great to have around … they get rid of rodents,” he said about the animal also known as a “miner’s cat” because miners used to encourage them to stay in their homes and mines to keep them free of rats and mice.

Nix called the ringtail a “feisty character” that screamed and hissed at him after it was caught.

She said they are not uncommon in the area and are highly “opportunistic.”

“They do like pet food,” she said, adding that they will often return to a site if they know they will find a regular source of food.

According to livescience.com, ringtails are normally timid toward people and tend to be seen less often than raccoons.

The animal was released away from residences in the nearby desert.