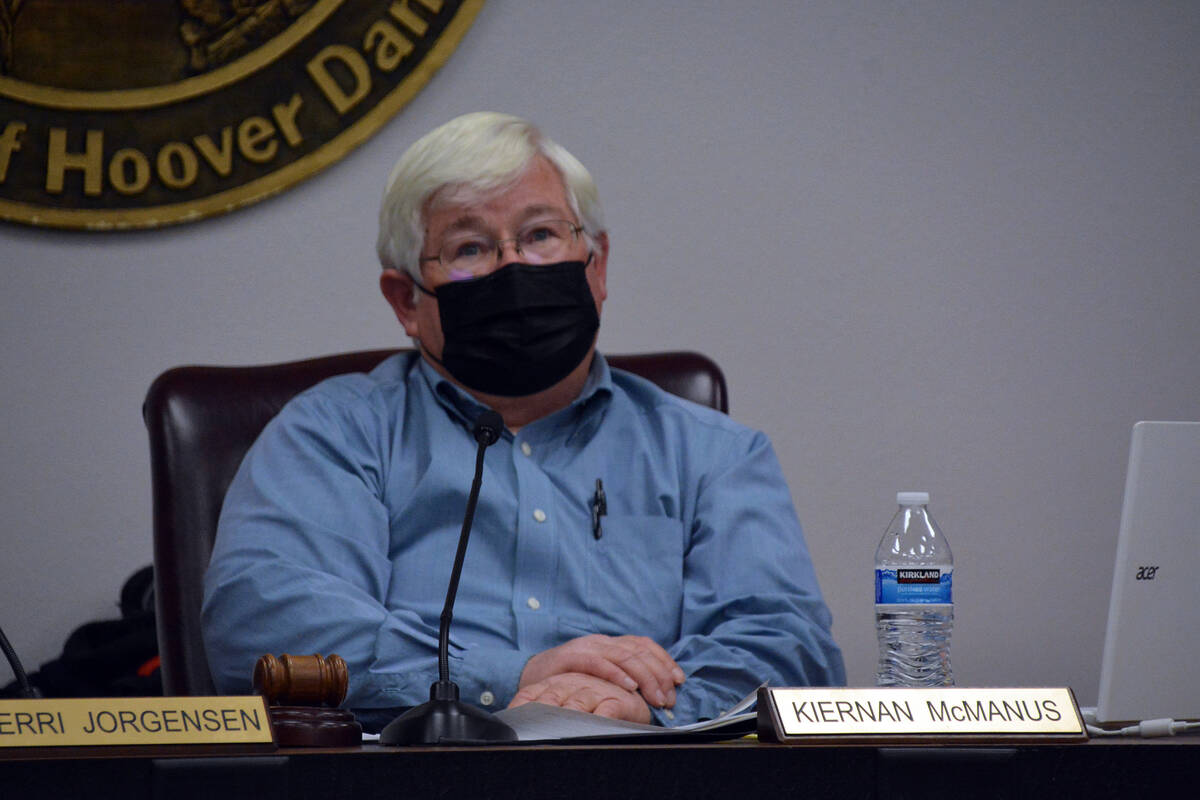 Celia Shortt Goodyear/Boulder City Review Mayor Kiernan McManus listens to a presentation about allocating $3.1 million from extra revenues to the new pool project. He voted against the item.

At Tuesday’s council meeting, Finance Director Diane Pelletier said the city had approximately $7.1 million in extra revenue during the last fiscal year because of one-time fees for a solar project and lease option as well as higher than expected tax income.

Per city ordinance, approximately $3.1 million of that money could be allocated for the municipal swimming pool project.

“For me, what is most exciting is seeing this amount of money that we can put toward our pool. … This is wise for us to do because the voters are pretty clear,” said Councilman James Howard Adams. “They want a new pool.”

Pelletier called it the “perfect storm of revenues” and said the city was “lucky” to be in this position.

“I’ve never seen it happen in my career to this extent,” she said.

Councilwoman Claudia Bridges agreed and praised the financial department for its work.

“I think it’s great that we could really possibly be able to fund the pool with very little bonds, if any,” she said.

As part of the finance department’s plan to pay for a new pool, council approved an ordinance in May that would allow excess revenue from fiscal years 2020-2024 be allocated toward the project. It would come after the appropriate transfers to other special funds.

Boulder City voters also approved having the city use $7 million from the capital improvement fund as the money became available for the project as well as 90 percent of the proceeds from the sale of Tract 350. Additionally, a $1.3 million donation was earmarked for the project.

The final step of that plan would come when the estimated cost of a new pool is known and would ask voters to authorize a medium-term bond that would be for 10 years or less and not require a tax increase.

Mayor Kiernan McManus said he was “very hesitant” about allocating the $3.1 million for the new pool and said he thought there were better uses for the money at this time.

He also said a big factor with funding the project is the sale of Tract 350, the land near Boulder Creek Golf Club. There’s been no appraisal for it yet, so they do not know how much money will be coming in from the anticipated sale.

“Since that is the bulk of it (project funding), the pool project really can’t get started until we know that money is in the bank. … The estimated total revenue is somewhere around $29 million,” he said. “We still don’t know exactly when that will happen.”

McManus also expressed concern about exceeding the projected cost of the new pool. He said the pool project committee had come up with an estimate “north” of $20 million.

“My concern is that if we look at $29 million from the sale of the land, $7 million from the CIP, that puts us at $36 million,” he said. “The $1.3 million from the anonymous donor and now what would be approximately $4 million out of the general fund, all of the sudden we’re over $40 million, and the voters had said they do not want a pool like that here in Boulder City, that they don’t feel that’s appropriate.”

Pelletier clarified that the voters rejected a $40 million bond to finance a new pool.

“I’m explaining to you what was said to me by hundreds of voters during that election,” McManus said. “They thought that that project was inappropriate for Boulder City. They thought that $40 million for any municipal pool was a joke, and they weren’t about to see their taxes increased to have it done. … To keep pushing money into there and then all of a sudden say, ‘Hey, folks, we know we told you we were going to give you an appropriate sized pool, but look at all this money we have.’ Meanwhile there are other projects that go unfunded.”

“I think this is the wrong thing to do,” he added. “That it’s an inappropriate place to put this money and the residents of Boulder City, if this does happen this way, have been misled once again.”

Adams disagreed and said he thought staff have been very transparent about where the money was coming from. He also said with inflation, the potential cost could increase past the $20 million mark.

“I think it would be more financially prudent for us because it is clear that we need a new pool, a new facility. … We have money that can be put aside,” he said. “It is available for it. I think it puts it where we need to be and if it’s left over … it can go toward other projects where they are necessary.”

Councilwoman Sherri Jorgensen said she’d rather have more money than not enough.

“I think I have to agree in that we have seen in the last year a very direct change in how far our money goes,” she said. “There’s a lot of inflation in a lot of services, a lot of products. … This is a prudent way to finance a pool ahead of time as opposed to incur debt for it.”