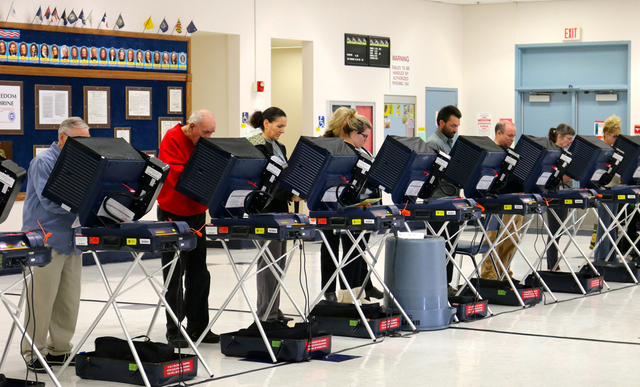 Boulder City voters were in favor of keeping the lights on around town as the city’s two ballot questions passed with flying colors on Election Day.

Question 1, which asked voters to allow the city to spend as much as $500,000 annually for the next seven years from the capital-improvement fund for utility infrastructure needs, passed with 77 percent of voters in favor.

Question 2, which authorized the city to sell 29 acres of city-owned land on the southeast corner of Bristlecone Drive and Adams Boulevard for the purpose of making much-needed repairs and utility improvements, passed with more than 70 percent of voters approving.

Although voter turnout was drastically lower than the 2010 midterm election, Mayor Roger Tobler still feels good about the number of votes cast this year.

“For a midterm, that’s still over 50 percent. That’s not a bad turnout,” he said. “We were worried that it was going to be less.”

The fact that both local questions passed by a landslide was reassuring to Tobler.

“I’m hoping it’s because they’re trusting a little bit more in their government,” he said. “That we’ll do the right thing and spend it on something responsible that they benefit from. We weren’t hearing that (disapproval), and usually we would hear a lot more negative toward it.”

Despite nearly 5,300 votes cast for each question, this year’s turnout paled in comparison with the 2010 midterms, where, according to City Clerk Lorene Krumm, approximately 7,000 votes were tallied for each.

The 2010 ballot featured 11 questions, including four citizen-created initiatives. Three of the initiatives included limiting city debt, establishing term limits for volunteer committees and preventing the city from owning more than one golf course. The six residents who circulated signatures for those initiatives are in the middle of a participation lawsuit against the city that has lasted more than four years.

The fourth initiative that made it onto the ballot included a possible amendment to the city charter that would make the city attorney an elected position as opposed to an appointed one.

“There were some very hot topics that divided the community on the 2010 ballot,” Krumm said.

Even though the two ballot questions have passed, the city has no timetable for when it will take direct action to improve the city’s aging electrical infrastructure.

The city won’t have any money to spend in the capital-improvement fund until 2017, when it anticipates paying off its debt for the third intake pipe at Lake Mead, Krumm said. Currently, the city spends $1.8 million per year on the project.

As for the sale of city-owned land, Krumm said the council will have the final say on when that happens.

“We have other approvals from the voters to sell land that we still haven’t moved on, so I don’t know how they’ll (council members) proceed with any land sales,” she said.

Tobler said he was glad the voters took to the polls to show their support for the city’s much-needed improvements, instead of risking other alternatives.

“We’re trying to reinvest in the electrical, and this is the right way to do it, unless we want to adjust rates,” he said. “I think people saw the common sense behind it and the need for it.”