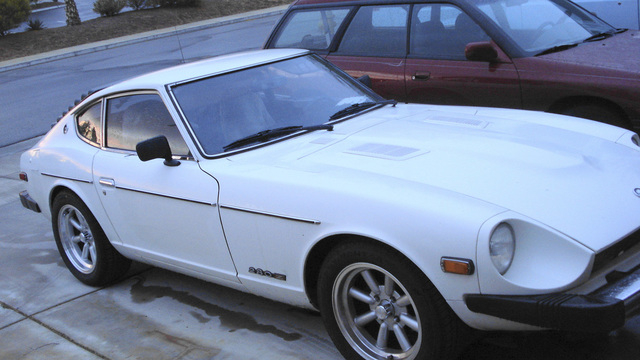 Boulder City may be clean and green, but it’s not safe from car thieves.

On Oct. 22, resident Ron Pandullo said his 1978 Datsun 280Z was stolen from his Walnut Drive driveway in broad daylight, while he was home and his son’s truck was parked in the driveway.

“I was sitting on the couch, and I thought I heard my car start,” he said.

But when he looked out the window, he said was able to see the rear of his car in the driveway. Tired from a home improvement project, he did not go outside to investigate.

“If I would have gone outside, who knows. It wouldn’t have been good for somebody,” he said.

Fortunately, the car was recovered Monday night in Las Vegas, near the intersection of Patrick Lane and McLeod Drive. The wheels and battery had been taken.

The brazen nature of the theft left Pandullo concerned that car thieves are targeting Boulder City.

“It was really brave, which makes me say it’s a more professional kind of thing,” he said.

However, Boulder City Police Detective Sgt. John Glenn said he does not think car thieves are targeting Boulder City, even though there have been seven vehicle thefts this year, including Pandullo’s car.

“Most of them are not true auto thefts,” Glenn said. “They are relatives or someone they loaned the car to and didn’t get it back.”

Two vehicles were stolen in January, and one each was stolen in May, June, July, September and October, Glenn said.

Three cases are closed, and one was reported as an unfounded complaint, Glenn said.

“Most of them are recovered. Someone either leaves the keys in them or leaves them unlocked, and someone uses them to get from Point A to Point B, and they ditch them,” Glenn said.

Pandullo, however, said his car was locked.

“The police say it’s someone trying to take it for a joy ride,” he said. “I doubt it.”

Losing the car, which he said was in “excellent condition,” was not as bad as feeling targeted, Pandullo said.

“The worst part about the whole thing is thinking you’re being stalked, that somebody is obviously watching you,” he said.

Pandullo, who has lived in Boulder City since 1994, considered the town to be relatively safe and never worried about his car being stolen, even though he once had another car stolen in New York.

“I have driven it all over. I went to Colorado with it. It just didn’t occur to me (it would be stolen in Boulder City),” he said. “Especially in the afternoon in the driveway.”

But following the theft, his perspective of his neighborhood began to change.

“I noticed all the houses with their garage doors open, and I was thinking I wanted to go and tell everybody it’s probably not a good idea,” he said.

Pandullo said he will be changing his habits. Cars will either be parked in the garage or on the side of the house where they can be fully seen from inside.

Glenn advises residents to always lock their car doors and to never leave a spare key in the car. If the car has a hide-a-key, do not leave it in an obvious place, he said.

“The victims are making victims out of themselves because they’re not locking their door,” he said. “They think they’re in Boulder City and there is no crime, but there is.”