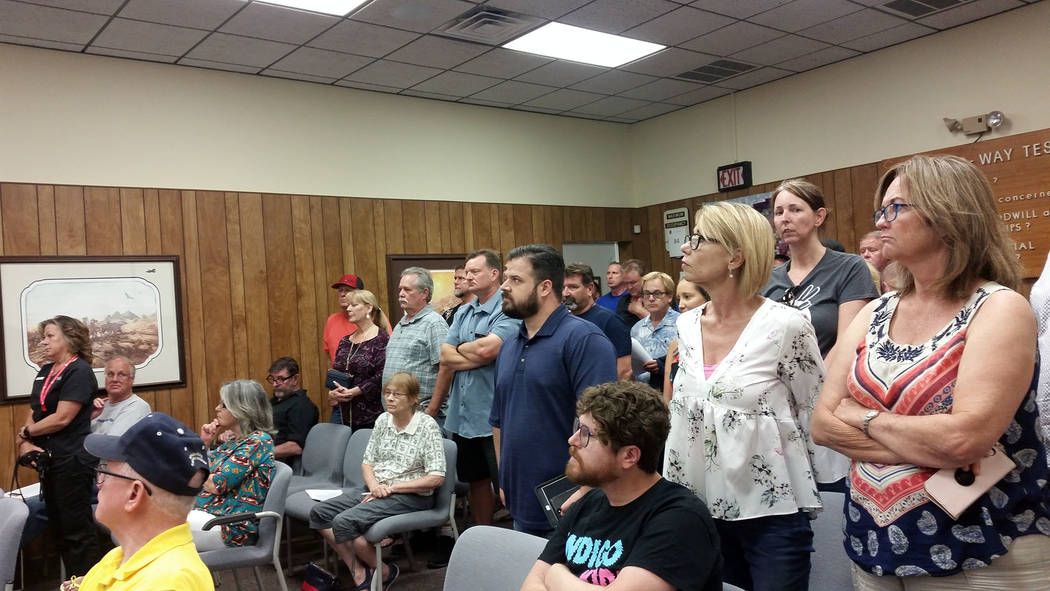 Celia Shortt Goodyear/Boulder City Review More than 30 residents and business owners stood at the City Council meeting July 10 to show their support for a proposed off-highway trail system in town.

The desire of some residents and business owners to have an off-road vehicle trail system was brought to the forefront again after the City Council removed an item about the proposal from its agenda at a recent meeting.

At the council’s July 10 meeting, more than 30 residents and business owners stood during the public-comment portion to show their support for the trail system that was first presented to former City Manager Dave Fraser in January 2017.

“We’re waiting for the next steps. … We finally get the chance to present it in front of council … and it got pulled,” said Jill Rowland-Lagan, CEO of the Boulder City Chamber of Commerce, who spearheaded the group.

During public comment, Rowland-Lagan told council members about the support in town for a designated OHV trail system and the use of legalized all-terrain vehicles and golf carts on city roads. She said a large group of citizens had started meeting in August 2016 to stay aware of upcoming changes to state law coming in the 2017 legislative session, after which the information was given to Fraser.

She said the agenda item was pulled because the city found some historical information from 2006 that needed to be reviewed.

“Staff is evaluating the request and will bring a recommendation to council,” said City Manager Al Noyola.

By having this type of trail system in town, Rowland-Lagan and others said, it could bring in a new niche of people, especially if it is tied into the state’s OHV trail system. People could come to Boulder City on their vehicles from other parts of the state and stay for a night or a weekend, she added.

“I think it’s something that’s going to help all businesses when the bypass comes through,” said Terry Stevens, a co-owner of the World Famous Coffee Cup Cafe in town.

Stevens said his family got involved with off-roading about a year ago.

“I think it will help everyone and create more recreation opportunities,” he said.

He also thinks it’s a way for the city to keep revenue within its boundaries.

Cindy Ford, resident and owner of Southwest Diner at 761 Nevada Way, likes off-road recreation and thinks the trail system is a good idea for the town because it would be fun for families and draw more people in.

“It would just be one more fun thing to do in Boulder City. … I think it would really help our town … with the bypass,” she said. “It’s going to affect us quite a lot, I believe.”

Additionally, Ford thinks it would bring in more visitors from Las Vegas.

Resident Marc Chemidlin, however, is concerned with the possibility of off-roading stirring up naturally occurring asbestos in the local desert.

“It’s just everywhere. … I don’t ride out here anymore,” he said. “If you’re riding your quad out here, you’re breathing it.”

Rowland-Lagan said the group’s proposal is for street-legal side-by-side vehicles that have seat belts, are registered and have insurance, as well as golf carts.

According to Nevada Revised Statutes 490.105, large all-terrain vehicles may operate on portions of a highway that have been designated as a general or minor county road. The vehicles need to be registered and meet the Department of Motor Vehicles’ requirements in accordance with NRS 490.0825.

When registered, the owner will receive a sticker from the state that is to be displayed on the vehicle.

In addition to being registered, to operate on those roads large all-terrain vehicles must be insured and have at least one headlamp that can illuminate 500 feet ahead of it, one tail lamp that is visible from at least 500 feet behind it, at least one red reflector or red and reflective tail lamp, a stop lamp, and a working muffler.

State law also allows a city’s governing organization to prohibit or allow off highway vehicle traffic on its roads.

Rowland-Lagan thinks the program needs to be well-organized and have an educational component so that people know the law about where they can drive their OHVs.

“If there isn’t an organized, well-educated program with maps and workshops put into place, it is going to be a free-for-all at some point in the future,” she said to the council. “More and more users of OHVs and golf carts are interpreting the laws and riding wherever they elect. If we don’t address this and clarify the current laws and ordinances, in short time, we’ll find chaos due to not having a defined program and trail system to share with residents and guests.”

In March, the Boulder City Police Department created an OHV program that provides effective coverage for the desert areas around town.

According to Police Chief Tim Shea, this program will focus on informing the public on where the safe areas are, as well as providing the ability to patrol.

He and the police department have been working on the program for more than a year and a half, and starting it was recently made possible through a $45,000 grant from the Nevada Department of Conservation and Natural Resources.