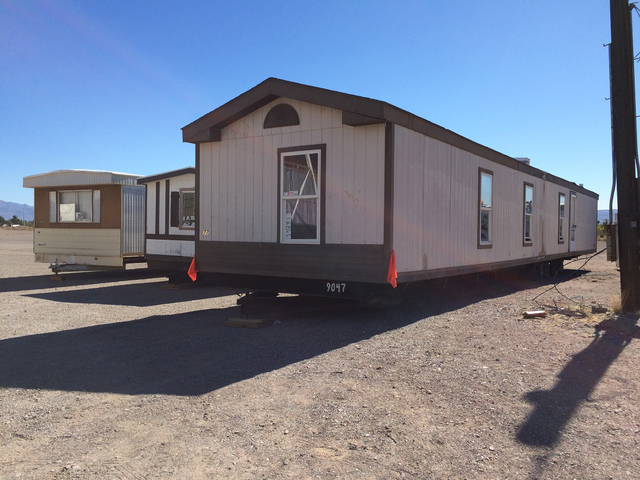 File photo Trailers are being moved out of the Boulder City Mobile Home Park at 1501 Nevada Highway to make way for a townhome development. After the Planning Commission approved a variance for the townhomes to be built, a local resident appealed the decision, citing it did not meet the requirements and favored the developer.

A local resident is appealing a decision made by the Planning Commission regarding a housing project by developer Randy Schams.

Historic Preservation Committee member Kiernan McManus filed an appeal Dec. 20 against a variance granted by the Planning Commission for Schams’ townhome project at the Boulder City Mobile Home Park during its Dec. 14 meeting.

McManus’ appeal states that the planning commission was “grossly bias(ed) in favor of the applicant” and that the city’s staff report recommending the variance be passed was not based upon an understanding of the city code.

“The report includes assumptions, inferences, faulty interpretations of code requirements, and substitutions of facts that are not present in the application,” McManus wrote. “There is no foundation in the existing code for several statements included by staff. The statements amount to no more than personal preferences in some instances. That is not the role of staff personnel and these statements are wrongful in consideration of the application.”

McManus said that the variance did not meet the requirements needed to qualify for approval.

“There is nothing exceptional or extraordinary about this property regarding the circumstances or conditions. The property was purchased by the applicant and he requested an R3 zoning designation. He should have known the requirements when he made the request.”

City code states that a variance can be granted if the layout of a property limits the owner’s rights. The mobile home park land must be granted the same “rights and comforts” as other plots in the same area or other pieces of land with the same R3 residential designation.

McManus wrote that the land does not deserve a variance based on this rule because no other area on Nevada Highway has an R3 residential designation because the city’s master plan designated the property commercial until City Council voted to change the zoning in October.

“The area where the property is located is zoned commercial,” McManus wrote. “There are no other properties of the proposed type in the vicinity. Therefore, there is no property right or enjoyment being denied that is possessed by others.”

While no area on Nevada Highway is zoned commercial there are other R3 residential townhomes that have received the same variance, including Schams’ Cottonwood townhome project.

During the Dec. 14 Planning Commission meeting, city Planner Susan Danielewicz said this variance has been given to townhomes before because the city did not adequately address that type of housing when building codes were reassessed in the 1980s.

“The zoning code is decades old and was designed for apartments and condominiums,” she said.

After the meeting Danielewicz said that the variance was given to Schams because it would have been given to anybody looking to build townhomes.

“I am not doing this because of Randy Schams,” Danielewicz said. “I would have recommended approval for anyone doing the same thing. The code does not address townhomes and I don’t think it is fair for a developer to have to make something they do not want because our code was not up to date.”

Planning Commission member Cokie Booth said that she respects McManus’ right to file an appeal but has no doubt that approving the variance was the right thing to do for the community.

“He is entitled to appeal, but I think when the community gets a chance to look at the process and how the Planning Commission was thinking, they will see we did the right thing,” Booth said.

“My job is to serve the community as a whole, and I think the community would much rather have nice townhomes than a trailer park or apartments.”

The appeal will now go to City Attorney Dave Olsen, who will decide if it should go in front of City Council at a future meeting.

Schams did not wish to comment on this story.