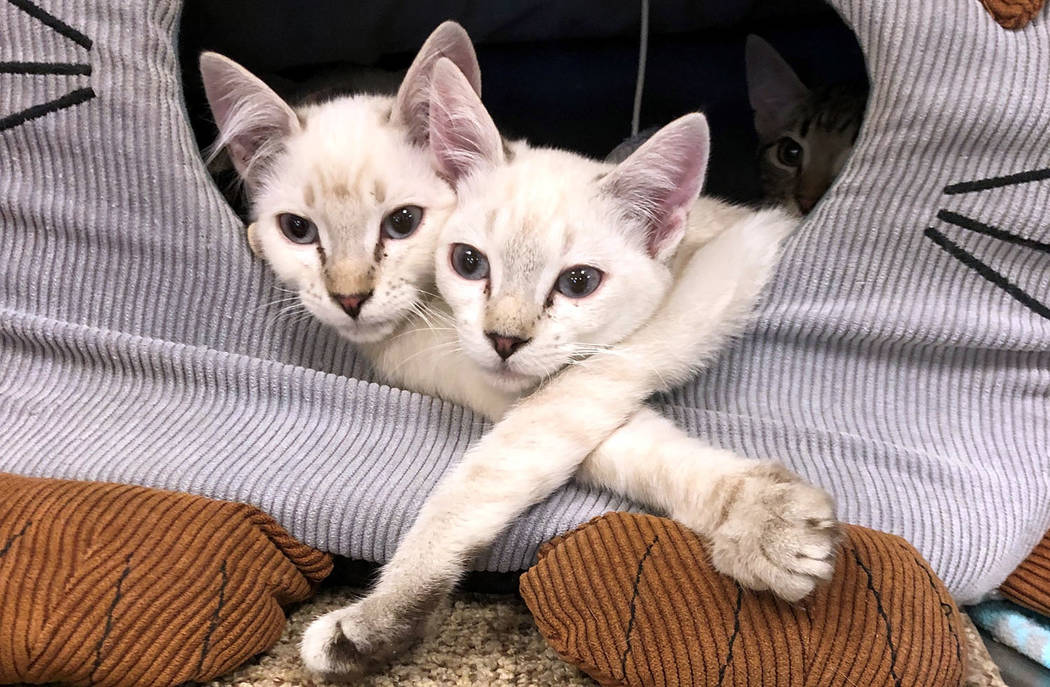 (Boulder City) Two of the 43 cats recently rescued from a local animal hoarder relax and await adoption at the Boulder City Animal Shelter.

Things are looking up for the cats recently rescued from a local animal hoarding situation as many have been adopted and more should be ready soon.

Two weeks ago, Boulder City Animal control officers recovered 43 cats from a mobile home. The conditions at the residence were a health hazard, and the animals were not in good health. There is still an investigation with the home owner.

Boulder City Animal Control Supervisor Ann Inabnitt said that six cats have been adopted and 12 feral cats have been placed in existing colonies in town, and she is still trapping more.

“Ten more will be ready for adoption, and the kittens are coming around,” she added.

Among the impounded cats, some are semi-feral, meaning they need to learn how interact with people and how to eat and drink from bowls and use the litter box. Inabnitt said the cats in that condition are improving and are close to being adoptable.

“They like humans now,” she said. “They’re not running from us.”

Inabnitt also said that the cats’ overall health continues to improve and tests done to check for feline immunodeficiency virus and feline leukemia came back negative. One of the older cats, however, had to be euthanized.

“It had a tumor in its mouth,” she said. “It was so large, it was not able to eat well, and the vet thought it would be best to put it down.”

Inabnitt said people also donated money to Heaven Can Wait, a nonprofit clinic for spaying and neutering, to help provide the surgery for more animals.

Earlier this year, the Boulder City Animal Shelter received a $25,000 grant from Maddie’s Pet Project. Almost half of that money was given directly to Heaven Can Wait, but Inabnitt said this situation has used a “big chunk” of it.

Maddie’s Fund, part of Maddie’s Pet Project, also reached out to the shelter about holding a pet adoption event Sept. 27-28.

“They will pay us $200 for every animal adopted out,” Inabnitt said. “That’s going to help, too.”

She said she plans to put that money toward more spay and neuter surgeries.

The Boulder City Animal Shelter receives some money from the city, but the pet food and money for spay and neuter procedures are donated by the community.

The shelter is considered a no-kill shelter as it euthanizes less than 10 percent of the animals it takes in.