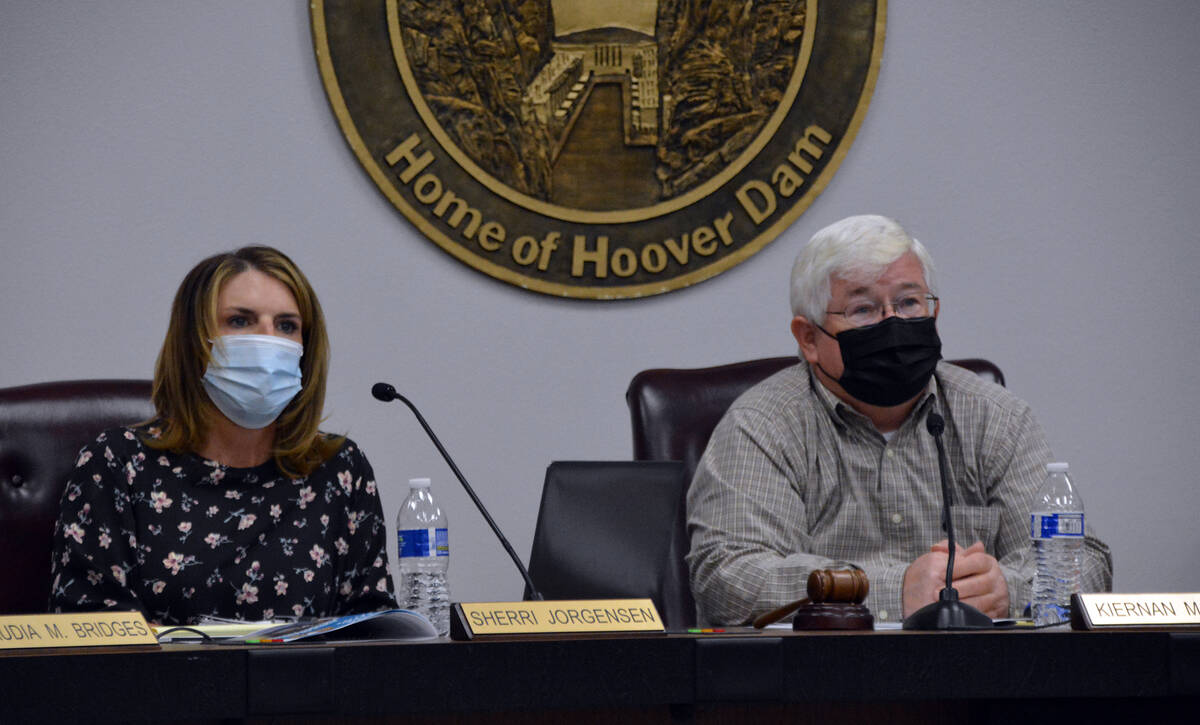 City Council unanimously approved rezoning 115 acres of land for solar development despite the Planning Commission’s recommendation that they deny it.

The land is near the Interstate 11 and U.S. Highway 95 interchange in Boulder City, west of the highway and north and west of 1,033 acres of land already zoned for energy use and leased to Townsite Solar LLC for a solar development project. The request would amend the master plan and rezone it from Study to Energy Resource.

“This project is not new,” said Mayor Kiernan McManus at Tuesday’s, Oct. 26, council meeting. “This has been going through a process. … I do appreciate the review of this by the Planning Commission, but this area down there, it’s just a continuation of what we’ve been doing. … This is a win for the city in my opinion.”

Earlier in October, in a 2-5 vote, the Planning Commission recommended council deny the request for a variety of reasons that included preserving open desert, dust control and keeping the area open for possible commercial development.

He said he thought rezoning the land for solar is “the appropriate use” for that parcel.

“I certainly think this is the right move for us in the city especially considering where it’s located and the benefits to it,” he added.

Townsite Solar representative Rick Lammers said the lease would provide the city with $5.3 million over its life. He also said the dust mitigation could be improved from their last project if it had been a problem.

“It can be controlled and it can be reviewed,” he said.

Linda Bullen, lawyer for Townsite Solar, said the Bureau of Land Management had determined the area around that 115 acres of land is a “high priority area for solar.”

She said she expected the BLM to start that process early in 2022.

“So that would make that little piece in there an island?” asked Councilwoman Sherri Jorgensen.

Bullen said that it would.

Also at Tuesday’s meeting, council approved adding two parcels to the land management process list and forwarding them to the Planning Commission for review.

The first was for almost an acre east of the Boulder City Library. It is the site of the former Boys and Girls Club.

“The library board is planning for the future,” said Kim Diehm, director.

In a letter sent to the city, Diehm wrote that they have no immediate plans for the land or the building, but they felt it was “prudent to try and secure it at this time.”

“Until we have decided on how to use the space, we may look for a tenant, or just secure the building against further vandalism,” she wrote.

Diehm also said they might find that the building’s condition requires them to demolish it, which they have the money for if needed.

Jeff Breeden, vice chairman of the library board, said the building is currently used for fire department training and they were willing to figure out a partnership to allow that to continue.

McManus said he thought this land would benefit not only the library but also the entire community.

“Regarding the historic value of it … what I’ve seen of the exterior of the building, it has been trashed to say the least,” he added. “So is there historic value there? Potentially, but I think most of that has been scrubbed off over the years through vandalism and other means.”

Council unanimously approved forwarding the library’s request to the Planning Commission to review as well as a 38.5 acre parcel north of Eldorado Valley Drive. Delamar Energy Storage LLC is requesting that piece of land be rezoned to Energy Resource from Manufacturing Energy so they can take over a current lease with the University of Nevada Research Foundation to develop a utility scale lithium ion battery energy storage facility.