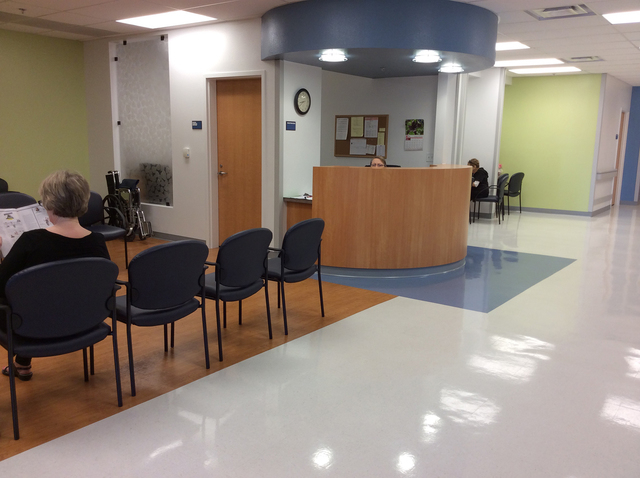 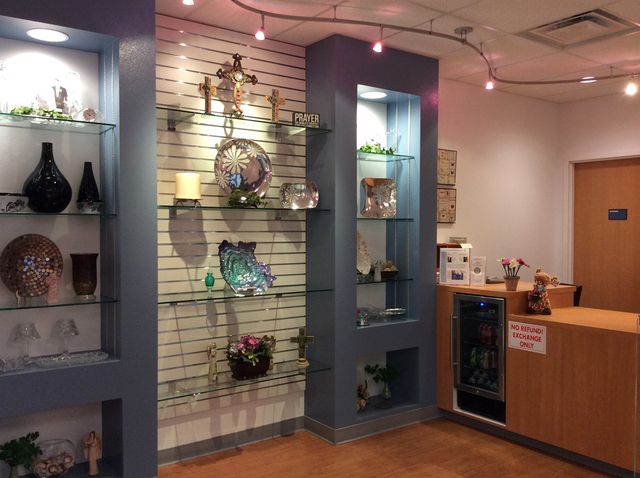 From the moment you step into the new entrance of Boulder City Hospital, you can see the changes underway to make the facility more viable and meet the needs of the city’s population.

A welcoming entrance in cool shades of blue and green, more accessible registration area and physical and occupational therapy department and enhanced gift shop are open as construction continues on phase two of the hospital’s $16.2 million expansion and renovation.

Tom Maher, hospital CEO, said construction is on or ahead of schedule and the changes are definitely improving the nonprofit facility’s financial picture. Construction is expected to be completed by the end of September, he added.

“I feel the whole entire reception area of the hospital is much more inviting and believe the gift shop invites people in,” said Kathy Calhoun, manager and merchandiser for Goldie’s Gift Shoppe, which is operated by the Boulder City Hospital Auxiliary. “The public will respond to it; it’s much more appealing.”

In just the first two days of operation in the new location all of the bigger, statement pieces “are already going out the door,” Calhoun said. “The accessibility and visibility has really helped us.”

Calhoun said the gift shop, which offers a selection of high-end gift items, cards, snacks and cold drinks, raises money to purchase items for the hospital that are not included in its operating budget.

“Every year we ask for requests from all departments and try to give to the hospital things that money is not readily available for,” she said.

Maher said much of the construction and renovation, such as the addition of four rooms and eight beds to the long-term care unit and expanded community education facility, won’t be as easily seen as the new entrance.

Also part of phase two is expansion of the hospital’s emergency department, including a renovated waiting area made possible through the efforts of and a donation from Linda Faiss. Additionally, the existing courtyard will be modernized and renovated through efforts spearheaded by Mike and Teresa Giroux and Vivian Harrison.

Maher said because they are a little ahead of their original forecast, they have been able to release some “interest reserve money to help with other areas of the hospital.” This includes purchasing a hood and repairing the grease trap in the kitchen.

“Things like that have worn out over the years and we are able to address them with our increased interest reserve dollars,” he said.

Many changes made through the project were geared to solidify the hospital’s aging-in-place philosophy that helps the city’s older population get the services they need close to home, Maher said.

The first phase, completed in January, brought two new units to the hospital: a 10-bed acute geriatric-behavioral center and a 10-bed inpatient acute rehabilitation facility. Maher said they are seeing “incremental increases” in both units, with the geriatric-behavioral center averaging six people a day and the acute rehab averaging three people a day.

Additionally, in conjunction with the new programs, the hospital has begun offering dialysis services for those with acute kidney disease who are admitted to the facility.

The entire project has created 300 construction jobs and 90 permanent jobs and will add more than $75 million during the next five years to the local community, according to Building Hope Managing Director Angela Quinn, who serves as project sponsor and developer.

The project was funded through loans by Agriculture Department’s Rural Development.