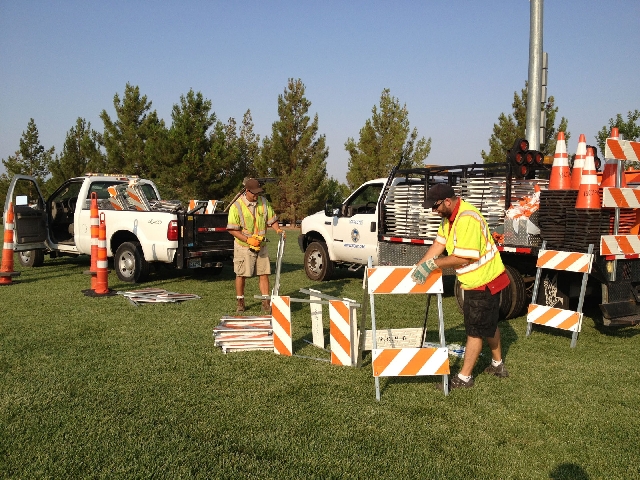 At 5:30 a.m. on July 5, families who parked their cars and RVs at Boulder City’s Veterans Memorials Park could be seen filing out of the grassy fields one by one. Confetti and used up fireworks littered the ground like they dropped from the sky like rain.

Unlike rain though, the debris that was left over from the Fourth of July celebrations does not evaporate and disappear. It remains there until cleaning crews and workers from Boulder City’s Park Recovery Department arrive early the next morning at the park for cleanup and make any damage done to the grass look like it never happened.

According to Sergio Solis-Sauri, landscape supervisor for the department, Fourth of July is by far the most challenging event to clean up after.

“The biggest problem for us is that this event takes place in the hottest month of the year,” Solis-Sauri said. “We have to try to relieve compaction created by the traffic or people on the grass so the grass doesn’t die out. We have to make sure irrigation is working appropriately.”

Compaction to the grass this year has been on par with previous Fourth of July’s though, and Solis-Sauri said not much has changed.

Park Recovery, which is a branch of the Public Works Department, has the responsibility of making sure that the turf, plants, trees, the municipal cemetery and 14 parks in Boulder City remain in good condition.

This crew consists of nine employees including Solis-Sauri, one irrigation tech, one landscape assistant, three senior landscape workers, and three landscape maintenance workers. All have at least a year’s experience.

Solis-Sauri said one of the biggest challenges is working with the city’s aging infrastructure.

“Our workers have to find a way to work around irrigation pipes that were put in a long time ago on top of the heavy weather in the summer time,” he said. “Not only does it affect the parks, but it’s hard on the employees. It’s not an easy job.”

One of the most grueling aspects of it would be the times in which they begin to operate. In the spring and summer seasons they start the cleanup work at 5:30 a.m. Once fall and winter roll around, they begin cleanup at 6:30 a.m.

According to Dave Stanton, the city’s streets supervisor, keeping things running smoothly is as important a job on huge events such as Fourth of July as any, and teamwork can go a long way.

“We set up all this crowd control, and we do that leading up to events, and the next morning we come in and take everything down and put it away,” Stanton said. “Try and keep everyone safe and sound. We just get everything off, so they can get back to watering and do whatever recovery they need to do,” I’m glad the Fourth has come and gone, and we can get back to other things we do such as fix concrete and asphalt. Also flood control and all kinds of things.”

Although the Fourth of July is the biggest challenge for cleanup crews in the city, other events throughout the year keep them busy as well.

Spring Jamboree and the Best Dam BBQ happen in downtown parks and are circled in the Public Works calendar on two separate weekends in May.

Other important events that need the Park Recovery’s attention include the Fine Arts Festival, Art in the Park and The Pumpkin Man Triathlon.

Often, the parks are closed after the events so the seeding can take effect and the remaining grass recover.

“At the end of the day that’s what we’re here for,” Solis-Sauri said.