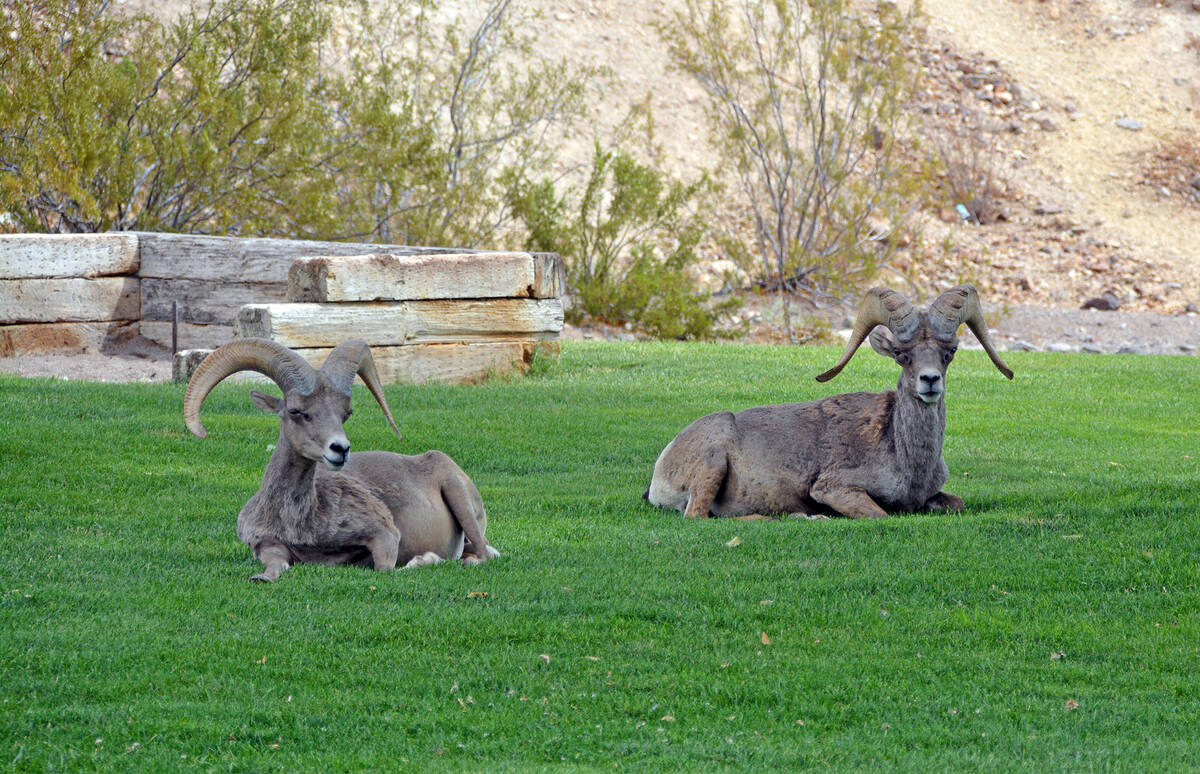 (Celia Shortt Goodyear/Boulder City Review) The Parks and Recreation Department is looking at installing a "Ram Cam" at Hemenway Valley Park, 401 Ville Drive, so that people all over the world can see the bighorn sheep 24/7.

The Parks and Recreation Department is working on a new way to share one of Boulder City’s treasures with the rest of the world: a 24/7 live feed of the bighorn sheep at Hemenway Valley Park.

The “Ram Cam” would be accessible through the city’s website and available to anyone with a computer and internet connection.

“While this is uncharted waters for us, we are working with our IT department on connectivity aspects and have ordered a Ram Cam to be installed at Hemenway Park,” said Julie Calloway, parks and recreation manager, at Tuesday’s, March 8, City Council meeting.

The announcement was part of the department’s annual report.

Councilman James Howard Adams said he was surprised at how many people visit Hemenway Valley Park to see the sheep, and he hoped staff could make sure the interaction with them doesn’t get to be too much.

“I think it is a really innovative idea to bring some attention to Boulder City, potentially from around the world … . I do also think it’s important that we do remember these are wild animals,” he said.

Parks and Recreation Director Roger Hall said that his department sends a letter to the tour companies each year with the rules for bringing people into Hemenway Valley Park and they usually don’t have any problems.

Communications Manager Lisa LaPlante said staff is currently investigating the feasibility of having the Ram Cam and they should have more details in late spring or early summer of this year.

During the annual report, Calloway also said the department will be implementing new software that will allow people to sign up for recreation programs online.

Councilman Matt Fox said he was excited about that ability because it would make it easier for people to sign up.

“You guys are doing an amazing job,” he said. “We can’t thank you enough.”

Hall said during this past year both golf courses had increased revenue and number of rounds played than in past years and are on track to have their profits surpass their expenses.

“Parks and Recreation is doing an outstanding job here in town,” said Adams. “A lot of credit, of course, went to our fire and police (departments) during the pandemic. Obviously, you guys were a big part … of that for the public (and) for the population to have a little bit of respite from an otherwise crazy time. So we appreciate all the hard work.”

Despite these positive accomplishments, Parks and Recreation is experiencing a staffing shortage, supply chain issues and park vandalism.

Calloway said the staffing shortage is really impacting the SafeKey program and they are doing the best they can to get to staff. She said they are able to make it work now but need to hire more workers for the summer program.

“We will have a program one way or the other,” she said.

Councilwoman Claudia Bridges asked what could be done to prevent the vandalism.

Hall said they’ve installed cameras at the community gardens and near City Hall and all of them have been stolen.

He said the typical vandalism is the restrooms being trashed. The custodians come to work and have to spend several hours cleaning that up in addition to their regular duties.

Additionally, the department is keeping track of the hours worked in that situation and the damage that is caused.