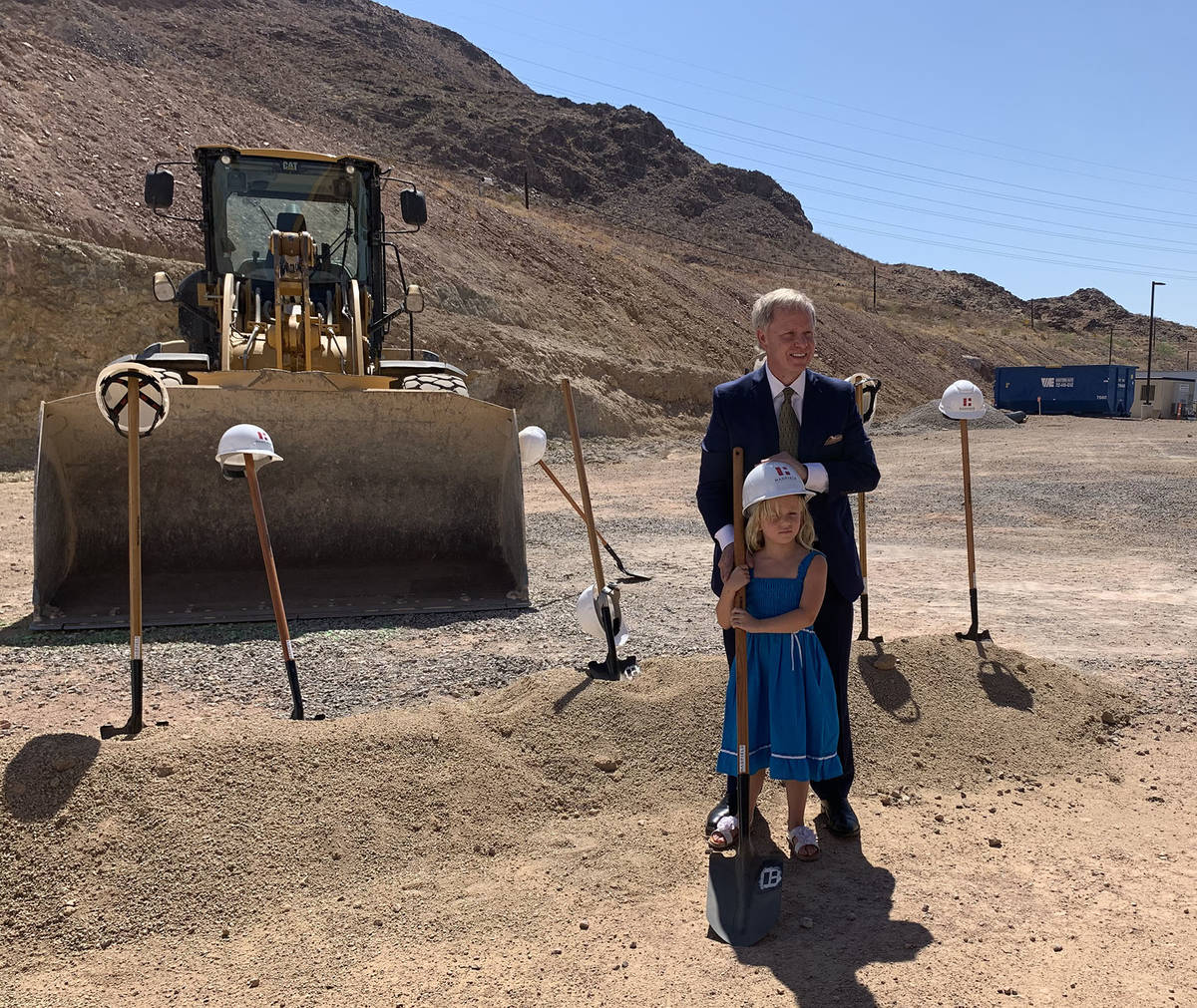 (Hali Bernstein Saylor/Boulder City Review) Joe DeSimone, owner of the Railroad Pass, poses for a photograph with his daughter, Emilia, 6, during the groundbreaking ceremony July 8 for the Holiday Inn Express that will be built on the 46-acre property adjacent to the southeast edge of Boulder City. 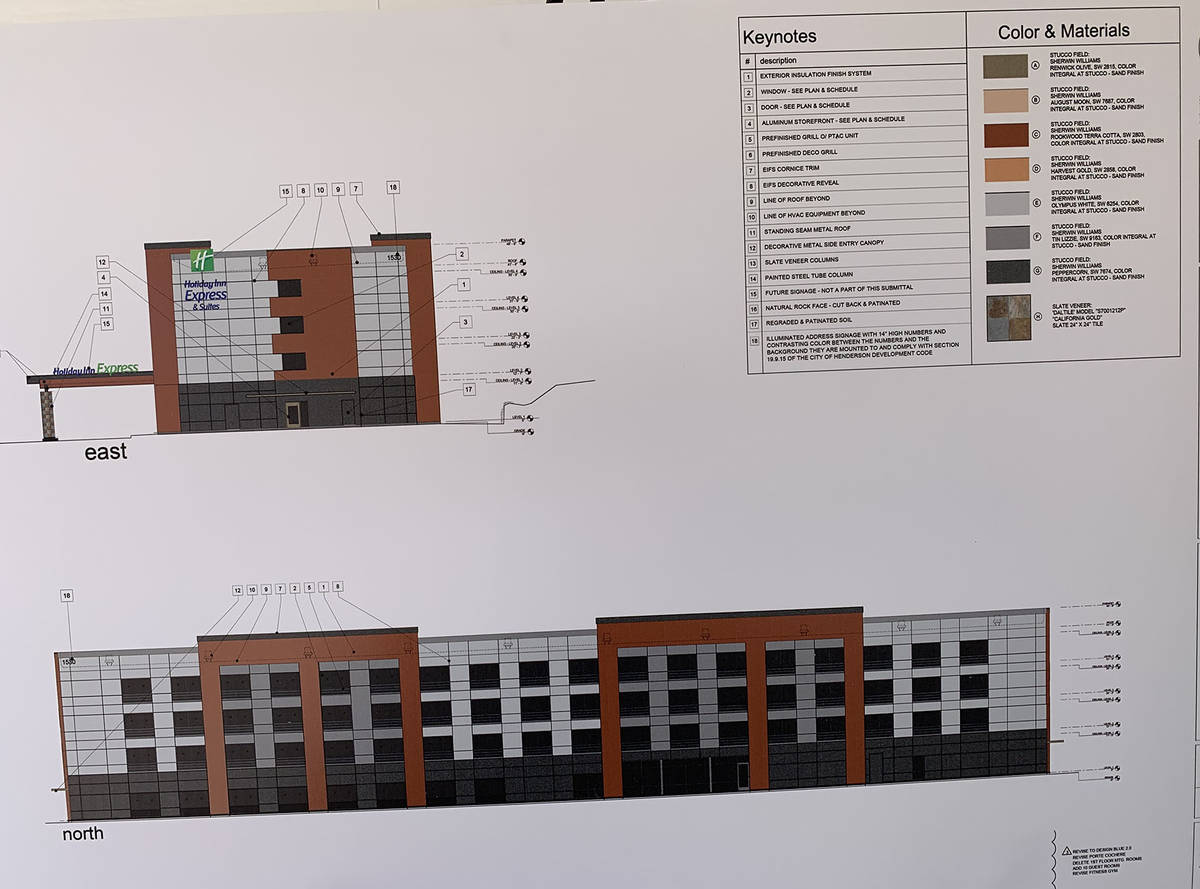 (Hali Bernstein Saylor/Boulder City Review) A rendering of the new Holiday Inn Express was on display July 8 as ground for the hotel tower was broken at the Railroad Pass in Henderson. 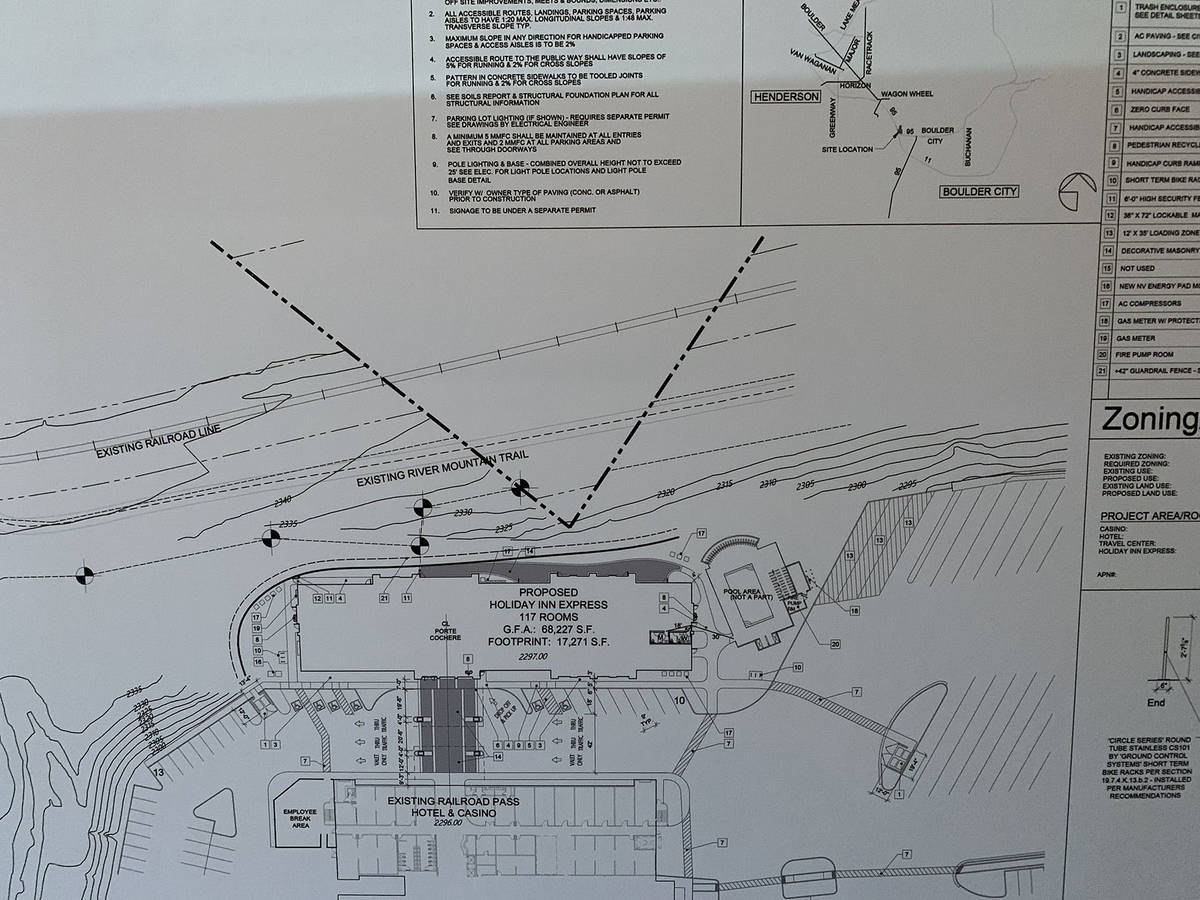 (Hali Bernstein Saylor/Boulder City Review) A map of the Railroad Pass property shows where the new Holiday Inn Express will be built. The drawing was on display July 8 as ground was broken for the 127-room hotel. 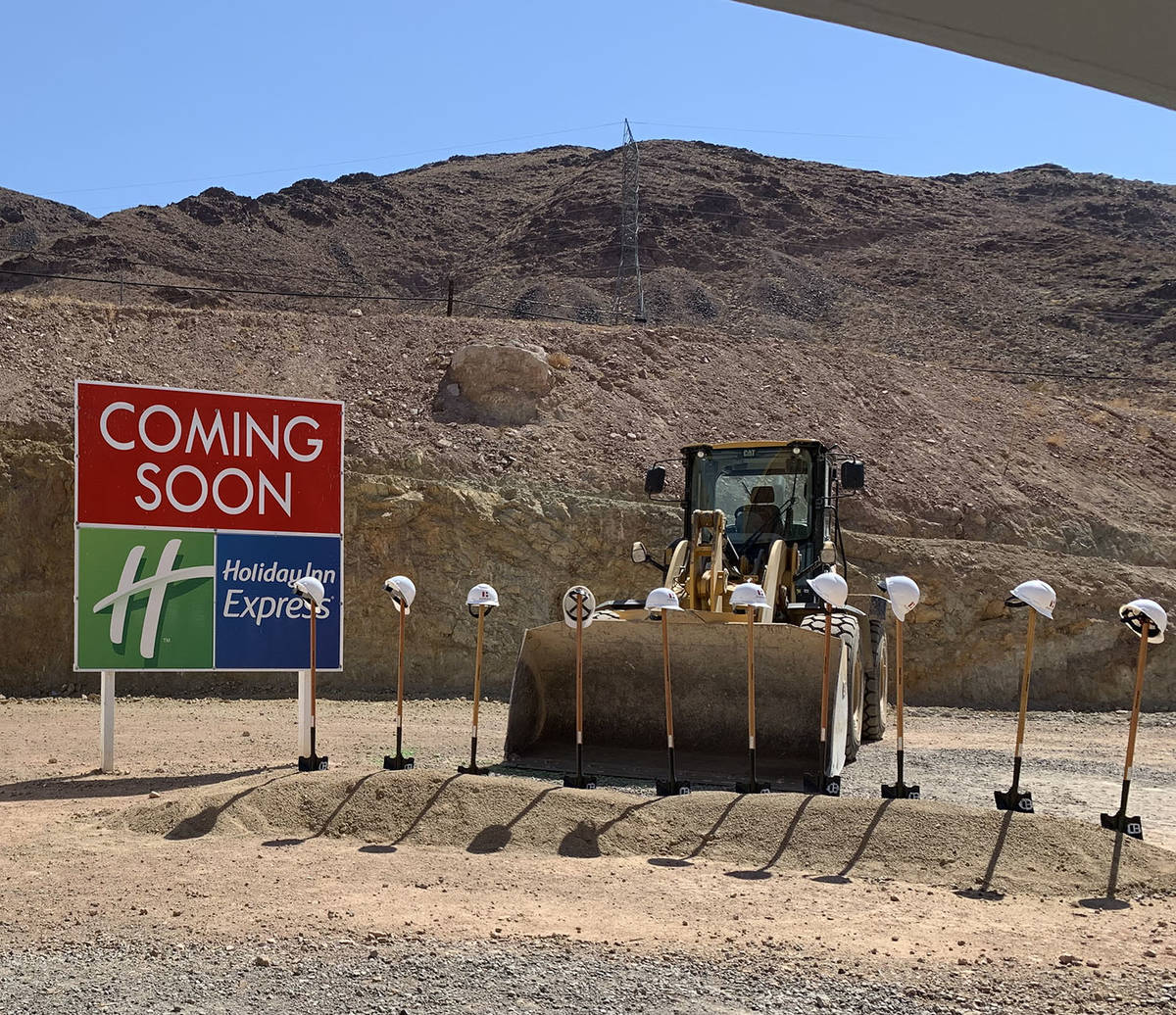 (Hali Bernstein Saylor/Boulder City Review) Shovels await a ceremonial groundbreaking at the Railroad Pass hotel-casino in Henderson on July 8 for the Holiday Inn Express that will be built on the 46-acre property.

Joe DeSimone, owner of the Railroad Pass, said the rooms are needed as the existing hotel is “full every night.”

It should be completed in about 12 months.

The new Holiday Inn Express is part of the IHG family of hotels and will allow people to make reservations through its system or by calling the Railroad Pass directly.

DeSimone said having the new hotel available through IHG’s rewards program, as well as the lack of a major hotel chain in the area, should bring more tourists to the Boulder City and Henderson areas.

“Tourists will be taking a longer look at Boulder City/Hoover Dam and what it has to offer.”

He noted that the new hotel will be dog-friendly.

DeSimone announced construction of the hotel tower in June 2019, but had difficulty finding financing once the pandemic hit and thanked First Savings Bank for supporting the project.

“We are so thrilled to have this opportunity,” said David Lusvardi, chairman of the Boulder City Chamber of Commerce.

Lusvardi said that whenever a new business opens, especially a hotel, it brings new visitors to the area “and we value that.” He added that the opening allows other businesses in the area to share what they do, providing everyone a “chance to grow together.”

“This is welcome news for everyone,” said Henderson Councilwoman Michelle Romero. “As pandemic restrictions open up, it will be a great opportunity for travelers.”

She said the economic vitality of the area “depends on job development from people like Joe,” who also recently purchased and renovated the former Eldorado Casino on Water Street in downtown Henderson. Now called The Pass, it opened April 1.

The hotel tower, to be built on the east side of the existing hotel-casino, is just one of several changes happening at the property.

The new truck stop will have a larger convenience store, additional restrooms and two fast-food restaurants, including one with a drive-thru.

DeSimone said he plans to offer a shuttle between the two properties, which should benefit the casino as well as either of the hotel offerings.

“I expect a lot of demand for the hotel and casino because there are not a lot of other services (in the area).”

He said he anticipates completion of the project in 12-15 months and is working on getting plans and permits ready while he waits for the land to be annexed into the city of Henderson from Clark County.

Kathleen Richards, senior public information officer for Henderson, said the city has received applications from a couple of owners to annex about 150 acres in that area, but it is “very early in the process and there is no proposed date for when it would be heard at a City Council meeting.”

DeSimone said he also has a retail pad for another restaurant or two near the big Railroad Pass casino sign.

“I’m looking diligently at that now.”

Inside the hotel-casino, DeSimone recently removed the old buffet, transforming it into a gaming area with 50 new slot machines and a Sbarro pizzeria and Italian restaurant.

Along with the change, he was able to create another entrance to the property, this one facing south and providing access from the adjacent parking areas.

Additionally, the former banquet space has been turned into a gaming area. DeSimone said he has a banquet facility at The Pass in downtown Henderson if people need space for a special event.

DeSimone said between the two properties he has 850 slot machines, plus table games.

He said changes at the Railroad Pass happened organically as he listened to customers, residents of Boulder City and Henderson and the truckers who frequent the property. He also conducted professional market studies to reinforce his findings.

He said he is looking forward to helping Railroad Pass mark its 90th birthday in August. The casino is the oldest in the state and holds license No. 4.