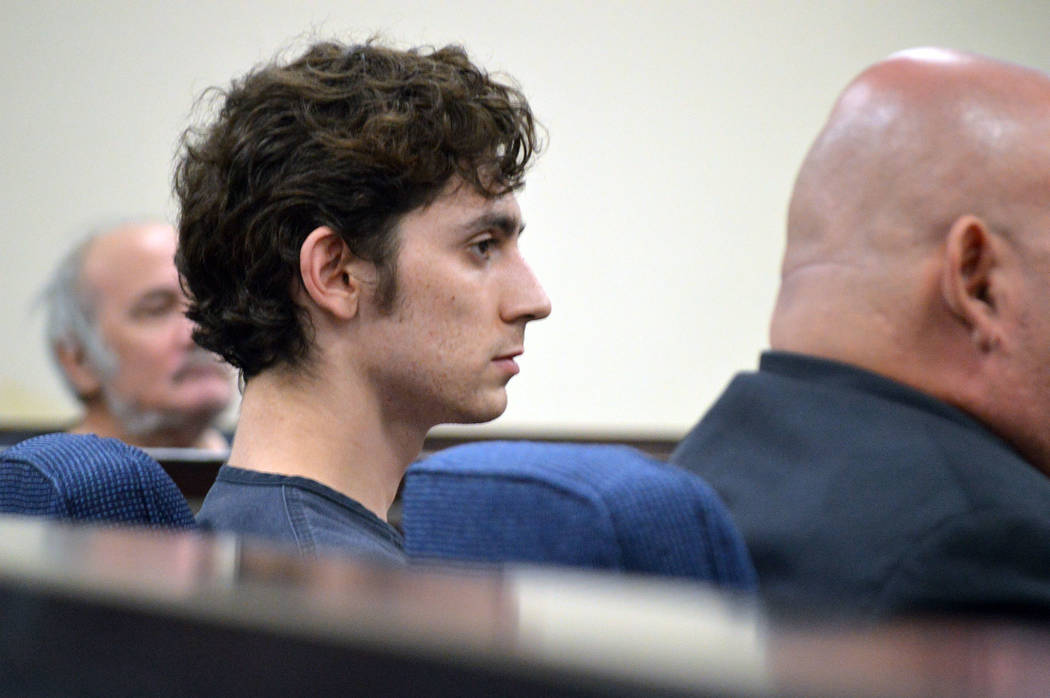 Celia Shortt Goodyear/Boulder City Review Devon Yslas, seen during his hearing Tuesday, Aug. 21, in Boulder City Justice Court, is required to remain in jail for his six-month sentence for one charge of animal cruelty.

A former Boulder City resident will remain in jail for his six-month sentence for animal cruelty after making threats against a prosecutor and possessing items prohibited by the justice court.

On Tuesday, Aug. 21, at a hearing in Boulder City Justice Court for one charge of animal cruelty, Judge Victor Miller ordered Devon Yslas to serve the remainder of his six-month sentence in the Clark County Detention Center instead of on house arrest.

At the hearing, Kevin Jenicke spoke about believable threats made to him by his former friend, Yslas, about Chief Deputy District Attorney Amy Ferreira, when questioned Clark County District Attorney Christopher Laurent. Ferreira had been prosecuting Yslas’ case prior to Aug. 7.

Jenicke told the court that sometime after he had helped move Yslas to live with his mom at the end of January, Yslas had told him “he wanted to eat people.”

“He said that he wanted to s**t an Amy,” Jenicke said.

Jenicke also said Yslas told him he was researching how to synthesize chloroform and how to “properly prepare people.”

Additionally, Jenicke said Yslas told him that police officers who abused their power “deserved to die” and he appeared to be researching them and compiling a list of potential victims.

“I felt what he was saying would eventually happen,” Jenicke said.

Yslas had been sentenced to six months July 10 as well as required to do weekly psychotherapy sessions, have no contact with animals for six months, do 50 hours of community service and stay out of trouble for six months.

This sentence was to run consecutively with other charges stemming from his Sept. 7 arrest where officers found evidence connecting him to the mutilation of cottontail rabbits. In February, Yslas was sentenced for another charge of animal cruelty as well as one count of wanton waste of game (amended from hunting out of season), one count of unlawful manner of hunting with aid of artificial light, and hunting without a license or permit.

Jenicke said he and Yslas had been friends for about two years, and he was with Yslas when he was arrested in September. According to Jenicke, the two would go out as often as they could and shoot rabbits.

“He’s the one who got into trouble,” said Jenicke when questioned by Yslas’ attorney Erick Ferran. “I didn’t.”

Jenicke said he called 911 on July 23 to report what Yslas said because he learned he could be held accountable if knew about it and did not inform law enforcement.

Additionally, he said he saw weapons at Yslas’ home when he went to visit him, and Yslas went into the attic to get a pellet gun to kill a bird that was hurt and going to die.

Jenicke also said Yslas’ knives were important to him and that he called them “his babies.”

“He considered his knives to be his murder knives that’s why they were so important to him,” he said.

He said Yslas had a “trophy necklace” of ears from the rabbits he killed in a storage unit.

Antonio Araiza, a corrections officer for Metropolitan Police Department in Las Vegas, was assigned to Yslas’ electronic monitoring program and said Yslas did not indicate to him that he had a storage unit, which contained items that violated his sentence and house arrest.

He said Yslas complied with the terms of his monitoring. He stayed in Clark County, did not test positive for drugs and alcohol and had no weapons nor contact with animals.

Miller said he was concerned Yslas had not divulged the storage unit when he signed his house arrest agreement.

The unit contained various knives, a dagger, a machete, a container with dried blood on it, and a small cooler that had a chain with rabbit ears and bird’s feet on it as well as a flash drive. Some of the knives appeared to have dried blood on them.

The flash drive had videos showing Yslas mutilating a rabbit by cutting off its ears and putting them on the chain. He also appeared to cut off some of their legs.

Nevada Department Wildlife Game Warden Casey Humphries, who was present for search of Yslas’ storage unit, confirmed finding the necklace in the cooler as well as a mammal skull. Due to what was found, Humphries said Yslas would be charged with four additional charges: possession of wildlife after season, waste of mammals, hunting without a license and being over the game limit.

Henderson Police Detective Geoffrey Kesterson testified he was asked Aug. 16 to investigate a case in which Yslas was involved. He said he asked Yslas whether he made a statement about wanting to eat human flesh.

“He admitted that he did make a statement like that, but (said) it was a joke,” Kesterson said.

Kesterson said Yslas told him he was the only person who had access to his storage unit, despite it being in the name of an ex-girlfriend. According to records from Life Storage, Yslas’ access code was last used at the facility Jan. 29.

Before Tuesday’s hearing, Kesterson legally searched Yslas’ mom’s house and found a dagger-style knife and a three-pronged knife in a box with medication with Yslas’ name on it and his belongings in it.

Ferran argued that incidents on the video and what was found in the storage unit happened before Yslas’ sentencing and the court should focus on his conduct on house arrest.

“Is he being appropriate on house arrest?” he asked. “According the EMP (electronic monitoring program), he was following the rules. Everything happened before sentencing.”

He also said that there was very “scant evidence” on the threat against Ferreira.

Laurent argued Yslas had committed a crime of possession, which is an ongoing crime. Additionally, what Jenicke talked about was corroborated in the video and photos obtained through the search warrant.

At the conclusion of the hearing, Miller said the facts of the case were disturbing and that he had structured the sentence to keep Yslas from committing future crimes.

“He’s not getting the type of monitoring I expected on house arrest. … The sentence was based on the fact he was going to benefit from counseling,” he said.

Miller also said that for Yslas to benefit from the counseling, he must be candid with the court and the doctor, which it appeared he had not been. Additionally, he was concerned because Yslas said he threw away the rabbit ears as they smelled bad but he kept them.

“He’s maintained that trophy,” Miller said. “He made it into a necklace.”

In addition to serving the remainder of his six-month sentence in the custody of the Clark County sheriff, Miller said he was waiting to rule on Yslas’ suspended sentence until he sees what happens with the four new charges.