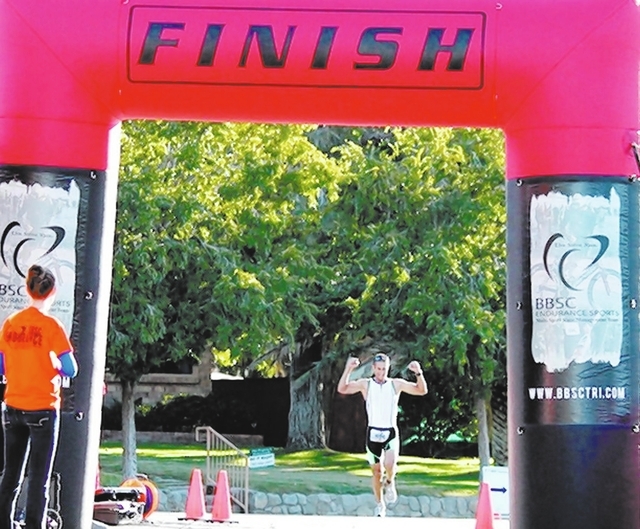 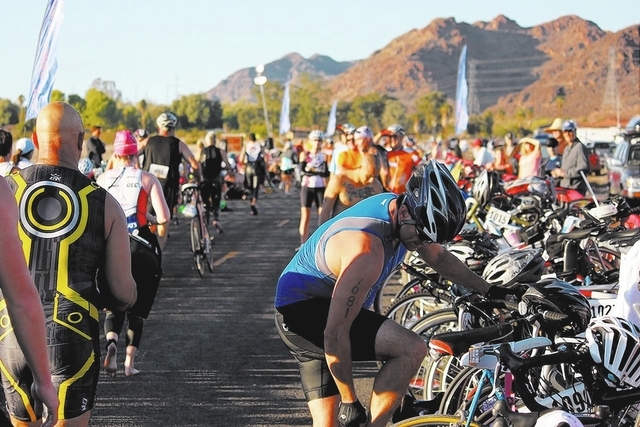 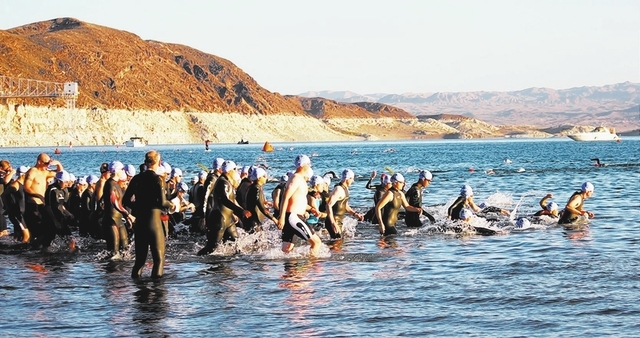 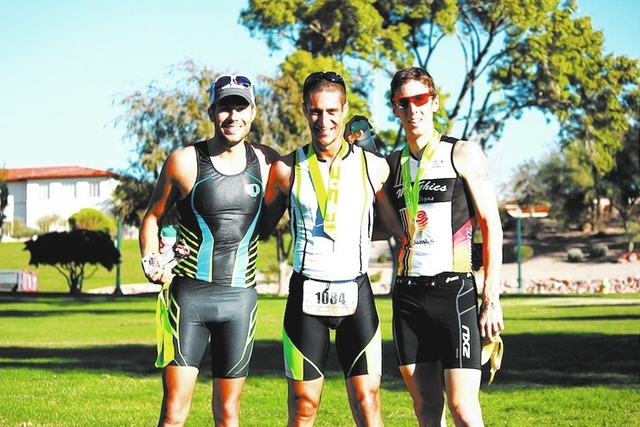 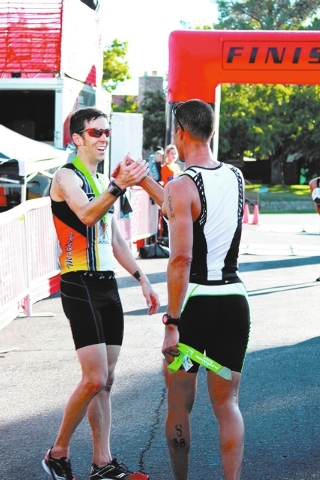 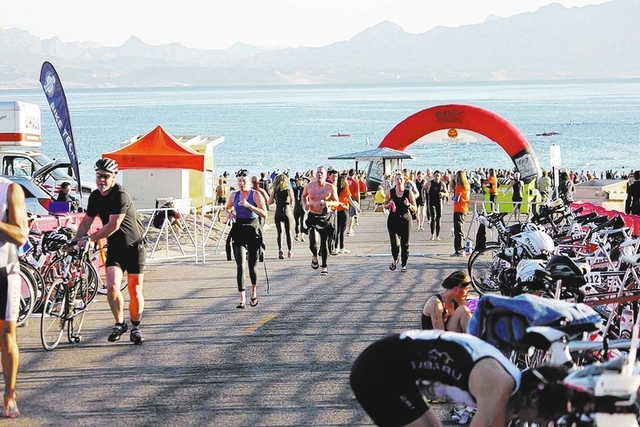 Athletes from around the globe gathered in Boulder City Saturday for the 10th annual Pumpkinman Triathlon. Although the event was marred by tragedy in the swimming death of one competitor, it was an otherwise upbeat day energized by the last-minute reopening of Lake Mead National Recreation Area, where two of the three events were held.

The competition consists of three events: swimming, cycling and running, in that order. The most extreme is the Half Iron Man, which has a 1.2 mile swim, a 56-mile bike ride, and 13.1 miles of running. The cycle portion includes a climb of 2,000 feet from Lake Mead into the mountains, while the run ends with a 200-foot incline leading into Wilbur Square in Boulder City.

There are less extreme events, including relay races that make it accessible to wider group of competitors.

Until Wednesday the major concern had been whether Lake Mead would reopen in time for the event. Without it, the triathlon would have been a foot race, which is not what competitors came for.

Ross Meldrum from Edinburgh, Scotland, registered for Pumpkinman 10 months ago. He was determined to compete, at considerable expense, no matter what. For that he brought his wife, Kirsty, and two sons Jamie, 9, and Scott, 10.

They found out about the government shutdown “just before leaving home,” Kirsty said, but “the only question was, do you take the bike?” Indeed they did. British Airways allowed them to substitute the bike for one piece of luggage, at no additional charge. As things turned out, Ross got to use it.

While Ross swam in Lake Mead Saturday morning, Kirsty was more forthcoming about Ross’ training than he was willing to say.

“He took up triathlon three years ago,” she said. “It’s a bit like a bug, isn’t it? You realize there’s an ulterior motive to every vacation plan. Last month it was, ‘Do you fancy a trip to Austria?’ “

“I had a great day,” Ross said later, “but was caught off guard by the hills on the bike course.” Even so he place fourth in his age (36) division.

Pumpkinman is his seventh and last event this year, he said. He began in April at the Scottish Borders — and is rewarding himself with a family vacation to Palm Springs, Calif. Next stop? Iron Man in Austria — most likely, without the wife and kids.

Although most competitors came from the region, the first runner across the finish line Saturday, barely an hour and a half after the start, was Luigi Grullan of the Dominican Republican.

Henderson favorite Paul Duncan placed third, sandwiching second-place finisher Mark Graham from Las Vegas. Duncan recently returned from a Hawaiian honeymoon with Angela Naeth, where they were content for once to sit on the sidelines for an Iron Man competition. Naeth placed fifth in her first Iron Man competition at Lake Tahoe last month. Next year she will head to Iron Man Melbourne where, Pumpkinman organizer Michelle Lund confidently predicts, Naeth will begin her trek toward winning World Iron Man.

Duncan, a local trainer and long-distance runner who ran the sprint Saturday, said his third-place finish was because running a shorter race is harder for him, not easier.

“Sprint’s the hardest — you gotta go full out,” he said. “With a long run you have to settle in and steady the pace.” The difference at the end was apparent, as practiced sprinters burst across the finish line while the longer-distance runners like Duncan cruised across at an even speed.

It may be too soon to predict next year’s turnout, but the event still seems to be in growth mode after 10 years, this year’s shutdown notwithstanding. Last year’s event had 1,300 competitors, Lund said. This year was more like 1,000, although final numbers are not yet available.

“On Oct. 1 registration shut down when the government shut down,” she said. They expected a last-minute burst of locals who registered after Lake Mead reopened.

Boulder City local Staci Selinger was one of them. Selinger, who trains children at the Boulder City swimming pool at Broadbent Park, waited until Thursday to sign up for the sprint because “I didn’t know the park would be open,” she said.

Training and competing runs in her family: Not only did her 58-year-old father compete in the bike relay, but daughters Sierra, 14, swam relay and Audrey, 11 — who has completed since the age of 4 — ran relay. Dad and daughters raced as a team — Fly by Night — and place third. Staci placed second in her age division and sixth overall.