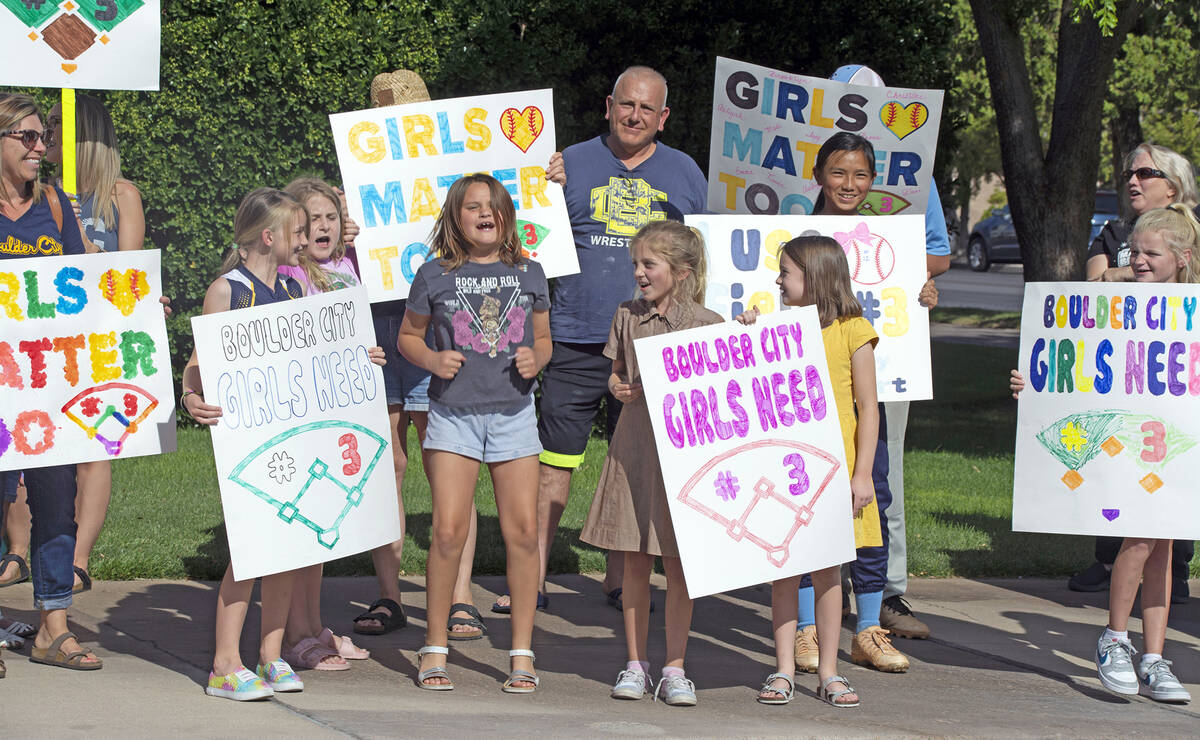 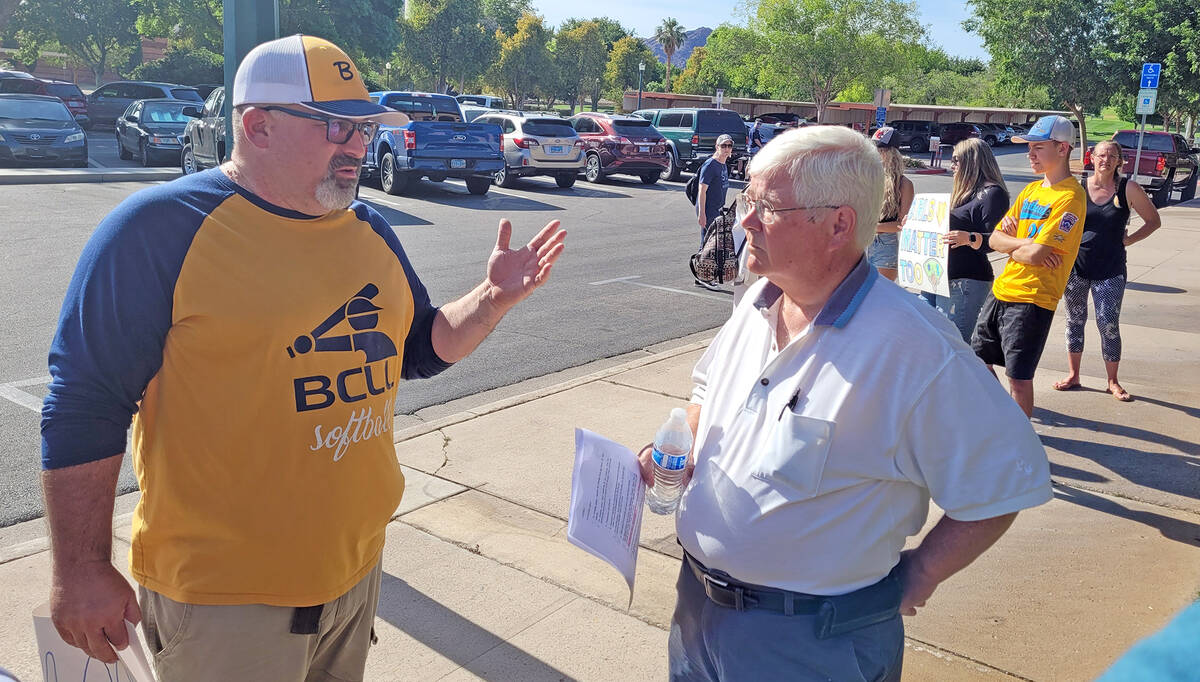 (Celia Shortt Goodyear/Boulder City Review) Softball coach Michael Keeton, left, talks with Mayor Kiernan McManus about why the softball field at Veterans' Memorial Park should not be converted into a dog park during a protest outside City Hall on Monday, May 23.

“Softball has been … built up in the city for the last three years,” said Carrie Keeton, whose husband is a coach and her daughters are players. “Our high school team just went to state. A large number of girls played softball in Henderson as a kid because there wasn’t an option here in Boulder City. We should be coming alongside girls and supporting them in their sports, not discouraging (them).”

On May 10, the council approved 4-1 to have staff move forward with changing field No. 3, the softball field at Veterans’ Memorial Park, into a full-time dog park. At that meeting, Parks and Recreation Director Roger Hall said that field was the least utilized and there are three other softball fields in town that could accommodate players.

“I don’t think they thought this all the way through,” said Michael Keeton, Carrie Keeton’s husband.

Keeton coaches a softball team of Boulder City girls for Henderson Girls Softball Association and disagreed with the ease of using the other softball fields in town.

“The fields at Hemenway (Valley Park) aren’t practical for kids and families. … Those fields are set up for adult leagues,” he said.

He also said it isn’t centrally located and easy for kids to get to for practice and there aren’t any real restrooms or a snack shack.

“The girls on these teams are too young to drive,” he said.

Additionally, it isn’t set up for families who have multiple children playing ball at the same time to go from game to game and the retaining wall could cause liability issues if a child climbs on it and falls.

“The rec center uses those fields four nights a week for adult play,” added Carrie Keeton. “There’s already a huge scheduling problem now. It will get worse when we are down a field.”

The other field is at Boulder City High School and used by its team.

Michael Keeton said there is a potential of three softball teams of Boulder City girls for the Henderson association and they would all have to “fight” for practice time.

“You’re taking away 9-14-year-old girls’ hopes of playing softball. … These girls are feeding into that program (Boulder City High School),” he said. “It just makes no sense to me to take something away that makes it easy for girls to play.

“We could go somewhere else and play, but that’s what got a lot of my kids to play this year, the ability to practice in Boulder City. … I don’t mind driving to Henderson for games but practicing locally is important,” he added.

During a protest Monday outside of City Hall, the Keetons were joined by other coaches and parents who also disagreed with the council’s recent decision.

Resident Katie Kilar said she believes there is a disconnect between the Parks and Recreation Department and the people using fields.

“It’s contentious,” she said of the relationship. “I have asked to get Hemenway (Valley) Park, but they won’t let us. It’s a constant battle finding space.”

Kilar is the assistant district administrator for Nevada District 2, which oversees the local league and eight others. She has been involved with Little League and youth softball since 2010 and was president of Boulder City Little League for five years.

Coach Robyn Curtis said she’s also been told she can’t use Hemenway Valley Park for her team because only adults are allowed to play there.

“We have no other fields that we can take over and play,” she said. “They (the city) have a lot of other areas for a dog park. … If we lose field No. 3, a lot of teams in Henderson and Las Vegas won’t come here to play because that is the only field they’ll play on.”

On Monday, May 23, the city released a statement on its Facebook page addressing the situation. It said that there is “ample field available for girls’ softball teams, but not many teams expressed interest.”

“So far in 2022, the only girls’ teams to reserve (a) field were Henderson’s Girls’ Softball Association,” it said. “The organization reserved field 3 for practices Monday-Fridays from 5 p.m. to 9 p.m., and Saturdays from 9 a.m. to 11 a.m. for the weeks of February 21 through March 31. During these times for practices, Hemenway Fields 1 and 2 were open and available.”

According to Michael Keeton, the field was also reserved with Parks and Recreation for his team and another from April 7 through May 19.

“There may have been a couple days we reserved but missed due to inclement weather, but other than that we had those dates. … Regardless if we practiced all the dates listed, we had them reserved,” he said.

“In 2020 we would have had three teams actively using that field,” added Kilar. “Vegas Valley baseball was also shocked to hear the city’s proposal. They’ve been using field 3 for as long as it’s been open for their tournaments.”

Communications Manager Lisa LaPlante said that the fields at Hemenway Valley Park are available for youth teams to use and “the Parks and Recreation staff make every effort to keep Boulder City youth the priority on our fields.”

“Little League has utilized these fields in the past when Veterans’ Memorial Park fields were not available,” she said. “(Boulder City Parks and Recreation Department) staff are not aware of any time that the groups present last night (at the protest) have been denied use of the fields other than when the fields have already been reserved. … They are currently utilized by (the department’s) youth programming, as well as adult tournaments and Boulder City Parks and Recreation adult programming on Thursday and Sunday nights.”