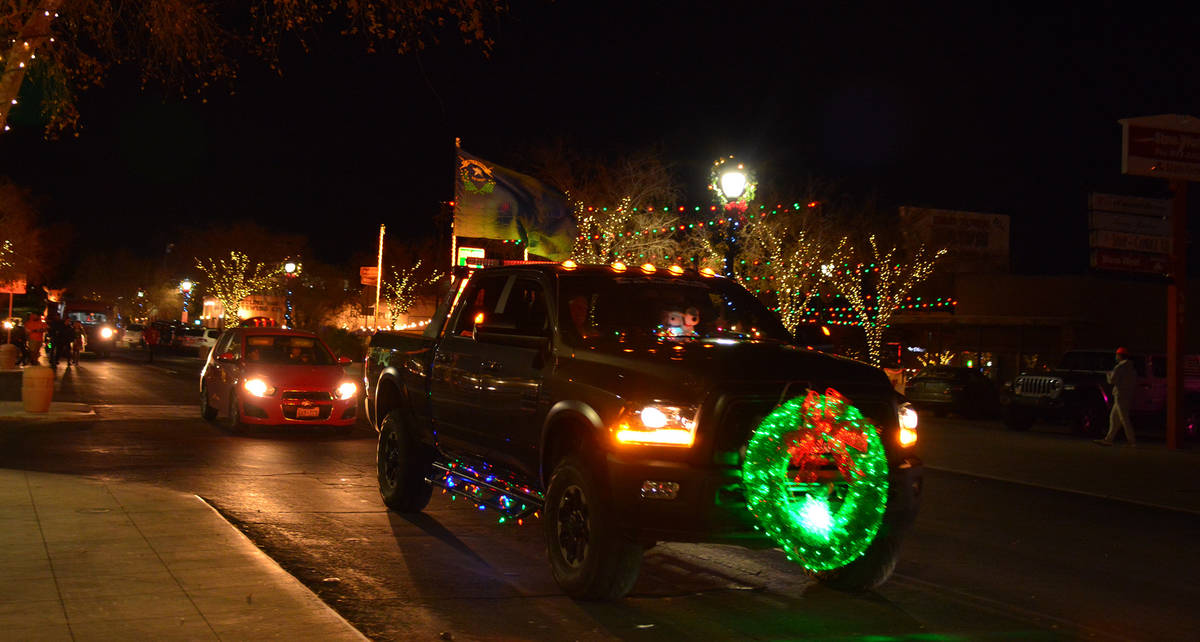 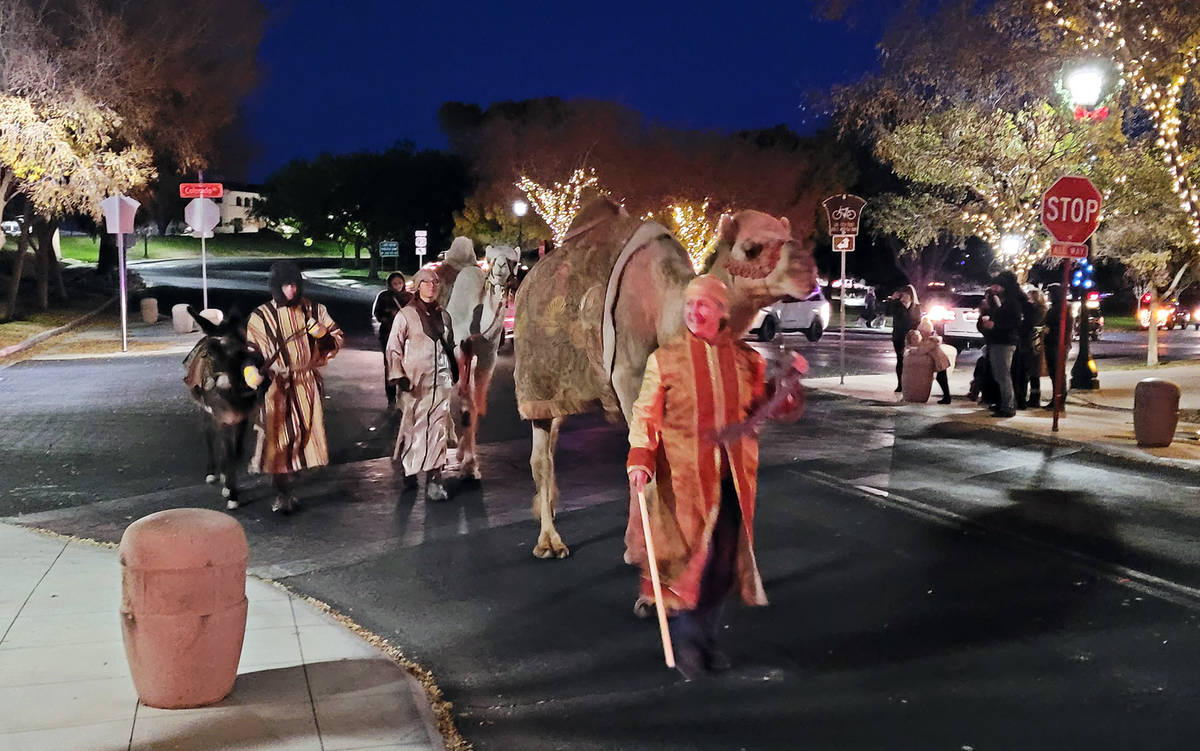 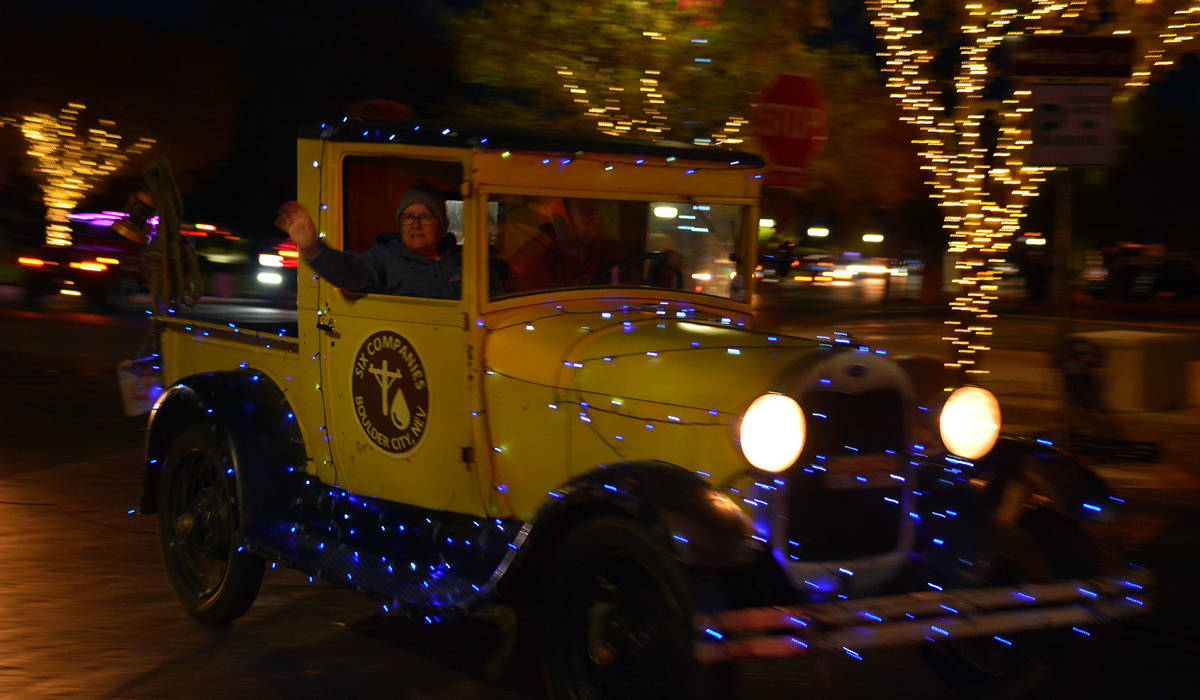 A group of people came together Saturday to celebrate the holidays with a Christmas protest parade in downtown Boulder City after the usual events were canceled because of the pandemic.

“We just wanted to keep the tradition alive for our kids,” said Bryan Greene, whose wife, Kim Greene, organized the event.

Each year Santa’s Electric Night Parade is held in town. It brings in thousands of people including Santa and Mrs. Claus and features lighted holiday floats. This year it was canceled because of social restrictions due to the COVID-19 pandemic.

Kim Greene said she organized the protest parade to bring some normalcy to people during this stressful year. She said the parade followed much of the traditional event’s route and also added a drive down Avenue I to encourage Emilee Giamanco, a young girl fighting cancer, who lives there.

Kim Greene said there were at least 30 to 40 vehicles that participated in the parade.

“They were wrapped around the park and included family vehicles, classic cars and trucks with trailers,” she said.

“I think it’s an important thing to do to keep the Christmas spirit alive in town,” said resident Joel Pepper, who drove a vehicle in the parade.

Resident Suzann Cox said the parade is “festive and fun” and she always goes to it. She said she participated in this one because she misses the town’s usual festivities.

Eric Record said he came to watch the parade for two reasons. He wanted to take pictures of the classic cars in the parade and to get out of the house.

“The lack of holiday festivities have kind of left us with a void,” he said.

Record said he and his wife live in town and enjoy watching the parade every year.

In addition to the vehicles, there were two camels and a donkey in the parade.

“It was amazing and so kind of the woman who trailered them to Boulder City for us all to enjoy. … It was so cool to see camels up close,” said Kim Greene.

Police Chief Tim Shea said he and the police department were aware of the event even though it wasn’t sponsored by the city or Boulder City Chamber of Commerce, which organizes Santa’s Electric Night Parade. He said he had to pull some officers off of their regular patrol duties to monitor it and the people involved were required to follow all motor vehicle requirements.

“Chief Shea issued numerous verbal warnings to individuals who wanted to unlawfully seat children on their trailers and/or flatbeds,” said Boulder City Communications Manager Lisa LaPlante. “They complied, so no citations were issued.”

Greene said it was a “real bummer” that her family and others could not have their kids ride on the trailers because they had spent the day decorating them.

“Other than that, it went great and it was so nice to see such a good turnout in the parade as well as the families watching along the route,” she said.