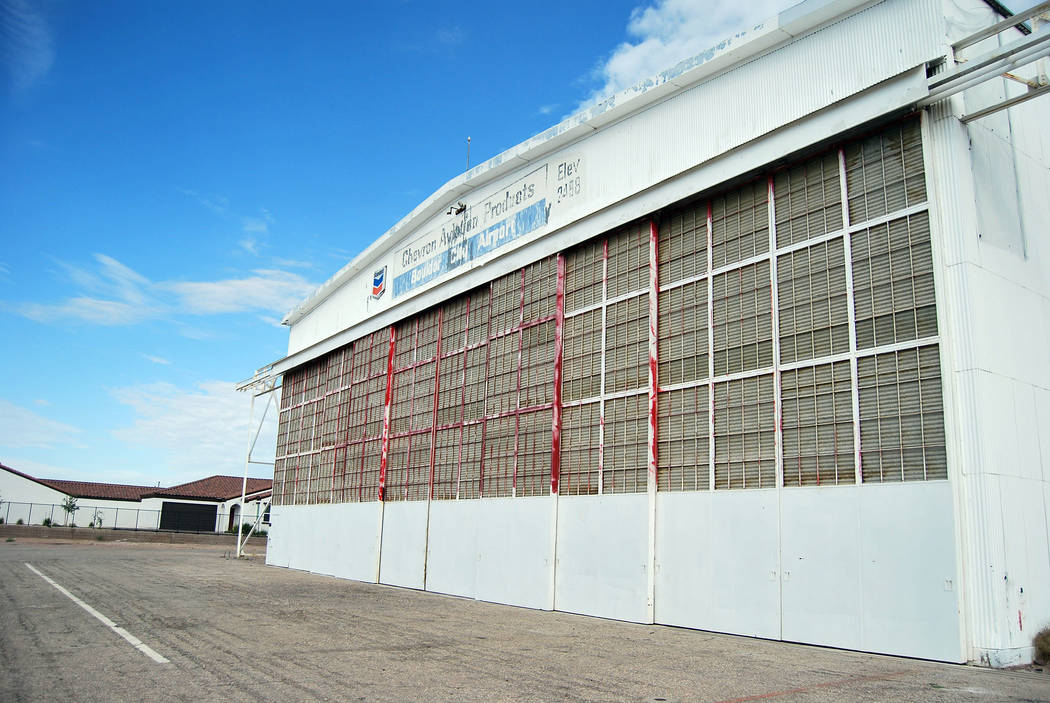 (Tim Dewar) Proposals for the old airport hangar and runway at 1401 Boulder City Parkway will be heard at next Historic Preservation Committee meeting at 7 p.m. Wednesday, Aug. 28, at City Hall, 401 California Ave.

Three proposals were submitted suggesting elements such as an RV campground, storage facility, event venue, workforce housing and an indoor ice rink. Details will be heard at the meeting, scheduled for 7 p.m. in City Hall, 401 California Ave.

The Bullock Field Coalition, Litjens Commercial LLC and a development group consisting of Larry Turner, Chris Gonya, Robert Peccole and Grant Turner submitted proposals after the city issued a request for potential uses earlier this year for the property at 1401 Boulder City Parkway. The parcel encompasses 22.67 acres of land, including an 8,000-square-foot hangar and 18.3 acres of runway space. The facility was dedicated Dec. 17, 1933, and served as the city’s only airport until 1990. Most recently it was leased out to a contractor for storage.

“This is just the first step in a transparent process to evaluate possible uses for the historic hanger,” said Community Development Director Michael Mays. “Should the City Council decide to proceed, the public will have several more opportunities to provide input.”

The city is not planning to sell the property and will maintain ownership if it is leased out.

Stuart Litjens of Boulder Boulder Boats and Caleb Gray of Boulder City RV are presenting the Litjens proposal, which aims to preserve the historic significance of the property and provided options for RV and boat storage as well as a short-term camping area for tents and RVs.

The first phase would restore the exterior of the hangar to match its original design and look. The space inside would be used as a service and storage for Boulder City RV, operating at 1495 and 1497 Boulder City Parkway. The second and third phases would be to create a secure boat and RV storage lot at a discounted rate for Boulder City residents as well as additional secure storage at the market rate for others.

“Our concept came from the need to solve a few problems all the while telling the story of Bullock Field and commemorating its history with a small park and plaque/sculpture,” said Litjens. “Additional space for the existing RV operation would utilize the hangar and allow for expanding upon the sales and service business. This business is a great source of sales tax revenue, which financially benefits Boulder City.”

Litjens said the camping phase would allow more tourists who visit Hoover Dam and Lake Mead to stay in town rather than leaving.

“The phases will be organically paid for through the business dollars generated, rather than tax dollars,” Gray added.

Their proposal did include applying for grants including from the city’s Redevelopment Agency.

The development group’s proposal includes a variety of things for the property.

“Our proposal includes a combination of event space, motorcoach resort and workforce housing … . Boulder City has become known for events. Art in the Park is a monster,” said Grant Turner about his group’s proposal. “It draws massive crowds and brings a tremendous amount of energy to downtown Boulder City … . Converting the airport hangar into an 8,000-square-foot event venue would provide the opportunity for Boulder City to host a wide variety of events from music festivals to car shows to farmers markets and swap meets.”

Turner said the rest of the site will be occupied by a combination of small and efficient modern housing and a motorcoach resort, both of which would help the current demand for housing and fit the overall landscape of Boulder City. The site would also be bicycle focused, featuring bike paths, a velodrome and cyclocross track, and provide connectivity to other areas in town.

According to their proposal, the members of the group have the combined financial capacity, experience, underwriting ability and financial institution connections to ensure completion.

Elements of their proposal include renovating the hangar and making it available for office space as well as a restaurant. There also will be an indoor ice rink, workforce housing, mini-storage units, an RV park, parking lots, an Airstream hotel, new landscaping that would replicate a wildflower superbloom and an amphitheater.

“Everything would be symbiotic and work together,” Martin said.

Martin also said their proposal includes 40 to 50 acres, which will encompass more than just the airport hangar property.

Additionally, Martin said he was willing to put up a fair amount of money for the project, but more funding would still need to be found because the basic cost of the endeavor is $6 to 10 million.

For a virtual tour of the property, go to https://youtu.be/Q0SrZw_oCgg.