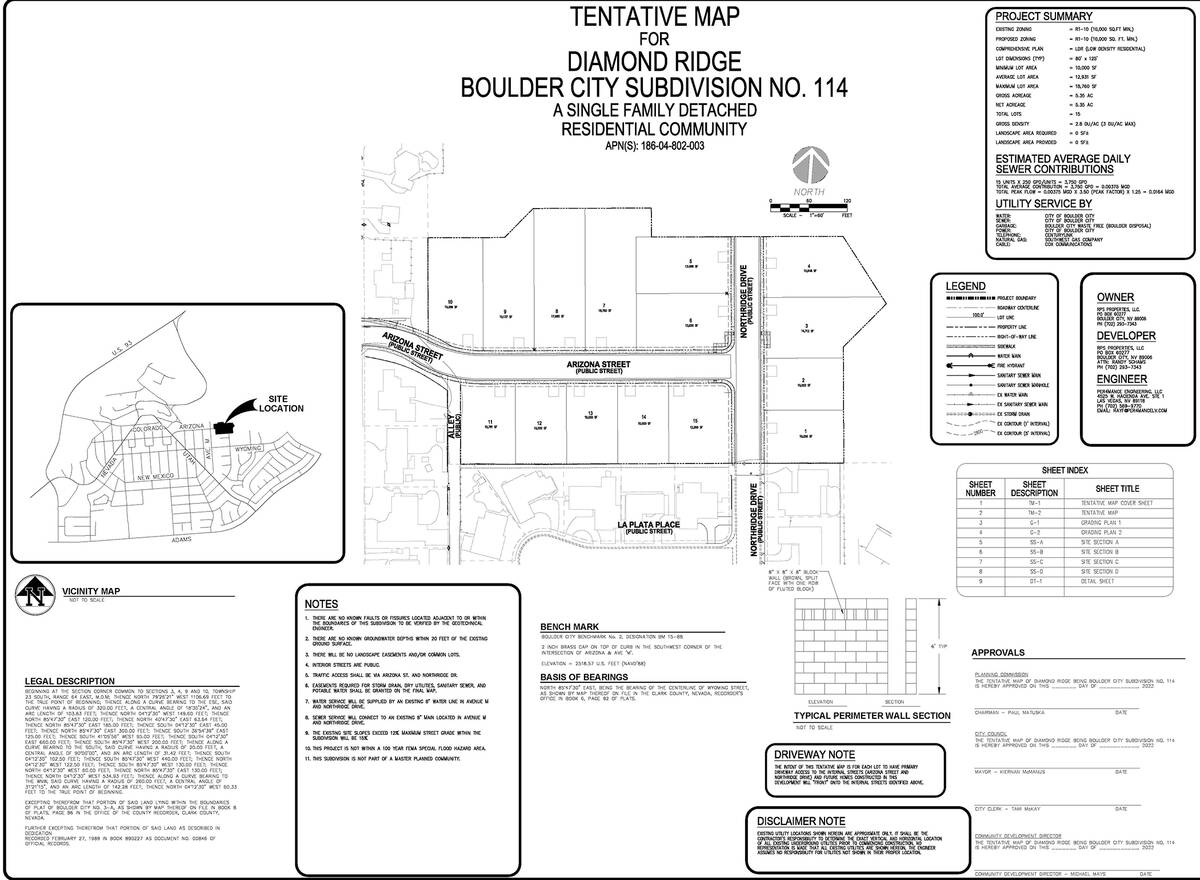 At its May 18 meeting and in 6-1 vote, the commissioners recommended City Council approve RPS Homes LLC’s tentative map and plan to divide 5.35 acres of land north of Northridge Drive, east of Arizona Street and Avenue M into 15 residential lots.

“Just so we understand, the final product will actually be lots for sale … in other words, you won’t be building homes on these lots at this point?” Planning Commission Chairman Paul Matuska asked Randy Schams, owner of RPS Homes LLC during the meeting.

Schams said that was correct.

“I retired from home building last year,” he said. “I have this property here and I just want to develop some finished lots. There’s a lot of interest in those lots because they (potential buyers) like the location.”

During the public comment period and public hearing, nearby residents expressed concerns about the project including potential structural damage from jackhammer vibrations to break up granite on the property, how the dust from the work would be mitigated and construction traffic.

“My concern is when he starts to jackhammer or dynamite … if my foundation gets cracked or my drywall gets cracked or the stucco gets cracked, who am I going to go to to get it repaired?” asked Vern Stewart, a nearby resident.

Stewart and others said a third-party-insurance bond should be taken out in case of that type of damage.

“We usually do a ripper tooth on a trackhoe, and (it) rips it and breaks it up,” Schams said. “So we don’t get a whole lot of vibration whatsoever when we rip it up.”

He also said he was willing to have the surrounding homes inspected by a third party before the project to document their current condition.

“That way we know if there’s any issues whatsoever in the future,” he said. “I have no problem doing that at all because it actually helps me.”

In terms of the dust mitigation, Community Development Director Michael Mays said that is regulated by Clark County and any developer has to get a dust control permit. To get one, the developer must provide a dust mitigation report. County inspectors then monitor the situation, and city staff works with them.

Schams said he has successfully worked with Clark County in these situations for years and plans to continue to do so.

“We understand that dust is a critical thing,” he said.

Schams also said once the project gets started, the construction equipment will remain on the site unless they need to haul dirt away or bring in sand.

The motion to recommend approval of the program included a condition for the third-party inspection.

Schams submitted this project to the Planning Commission in 2016 and it was approved. He did not, however, move forward with the final map in the appropriate amount of time.

“The reason I put it on hold is (because) a very good friend of mine got in a severe car accident, and so I had to operate his businesses for two to three years,” he said. “And I just kind of let a lot of stuff go. He made it through but … I had to run his businesses for him, and so now we’re ready to move forward again.”

Schams’ tentative map and project will go before City Council at a future meeting.