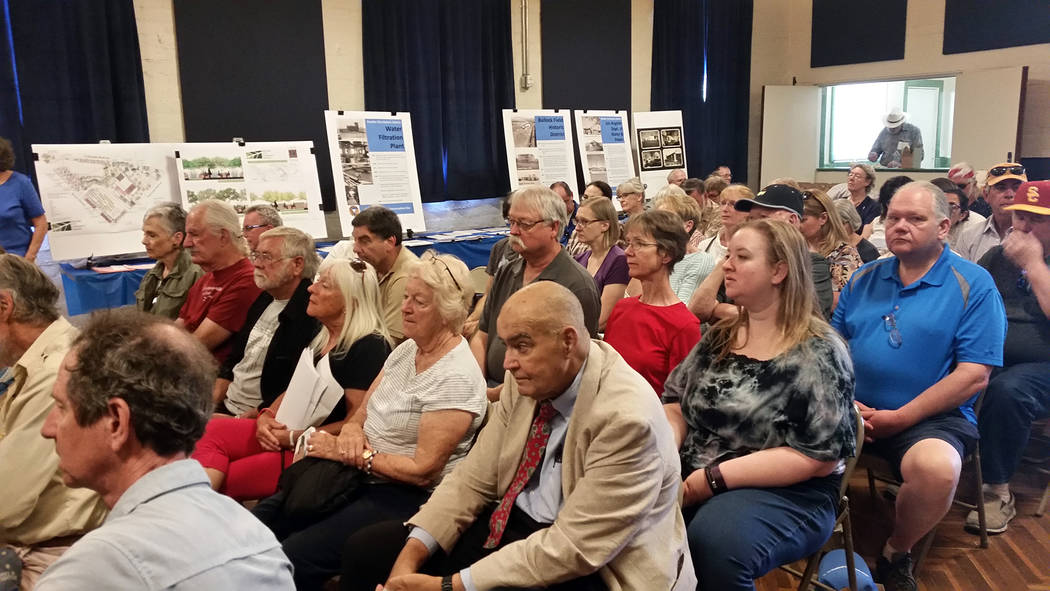 The recent Historic Preservation Day in Boulder City went beyond the expectations of its organizers.

The event was held on Saturday, May 12, 2018, at the Los Angeles Department of Water and Power’s old building at 600 Nevada Way. It included tours of the LADWP’s historic Six Companies Executive Lodge in town as well as a panel discussion about historic preservation.

“We had more than 100 people tour the lodge, and 50 more on a waiting list for a future time. …We never expected a line out the building and down the block for historic preservation day,” said Alan Goya, chairman of Boulder City’s Historic Preservation Committee. “It’s never happened before. The city could not have done a better job of welcoming LADWP to it.”

The Six Companies Executive Lodge was originally built to house the directors of Six Companies Inc, which was an association that built the Hoover Dam and power plant in the 1930s, according to LADWP.

The lodge is 2,000 square feet and is located in a residential neighborhood in town. It has six bedrooms, a living room, and dining room and cared for 24/7 by a caretaker who lives in the property.

“The tour of the lodge was fantastic,” Councilwoman Peggy Leavitt said. “I was on the tour with a couple of women who grew up in Boulder City and it was so fun to hear their stories and recollections of hiking up to that house as young girls.”

According to Joe Ramallo, assistant general manager at LADWP, the lodge is currently used for executive meetings.

Ramallo said that it was “completely by chance” that he and Goya met.

“We had been looking for … a way to partner with the city for the executive lodge,” he said.

That new partnership is what allowed people to visit the executive lodge on Saturday, May 12.

The 2018 Historic Preservation Day also featured a panel discussion with historic preservation leaders and stakeholders within the city, county, and state.

It was moderated by Heidi Swank, Nevada assemblywoman and executive director and founder of the Nevada Preservation Foundation.

Swank is passionate about historic preservation and calls herself a “building hugger.” She also thinks that flexibility in preservation is important.

“If we don’t allow flexibility, we end up with demolition,” she said. “We need to look at what other places have done.

In addition, she said that preservation is important because it’s cheaper as the materials for a new building cost more than the labor of building it.

“It’s the economics of it … It’s cheaper to keep a historic building than to build a new one,” she said.

“I couldn’t have asked for a better panel,” he said. “Those are the premier historians in Southern Nevada as far as I am concerned. The stakeholders were there, too.”

“It was helpful to hear having a specific plan with respect to prioritizing buildings that should be saved is a necessity,” said Leavitt. Goya said that he wanted Emergency Aid of Boulder City there because they are currently using a historic building for operations.

“I believe the Historic Preservation Committee was very pleased with the turnout. …The Committee and Susan Danielewicz put a lot of work into organizing the event,” Boulder City Community Development Director Michael Mays said. “We appreciated all the help from local volunteers, the speakers, the Los Angeles Department of Water and Power and the Boulder Dam Museum for their time and sponsorship.”

“I thought Saturday was a wonderful day and am pleased that we have such a dedicated corps of individuals who have volunteered their time to plan and coordinate the day’s activities,” City Councilman Warren Harhay said.

Additionally, attendees were able to tour the old water filtration plant at 300 Railroad Ave. Goya said that it was a last-minute addition to the event.