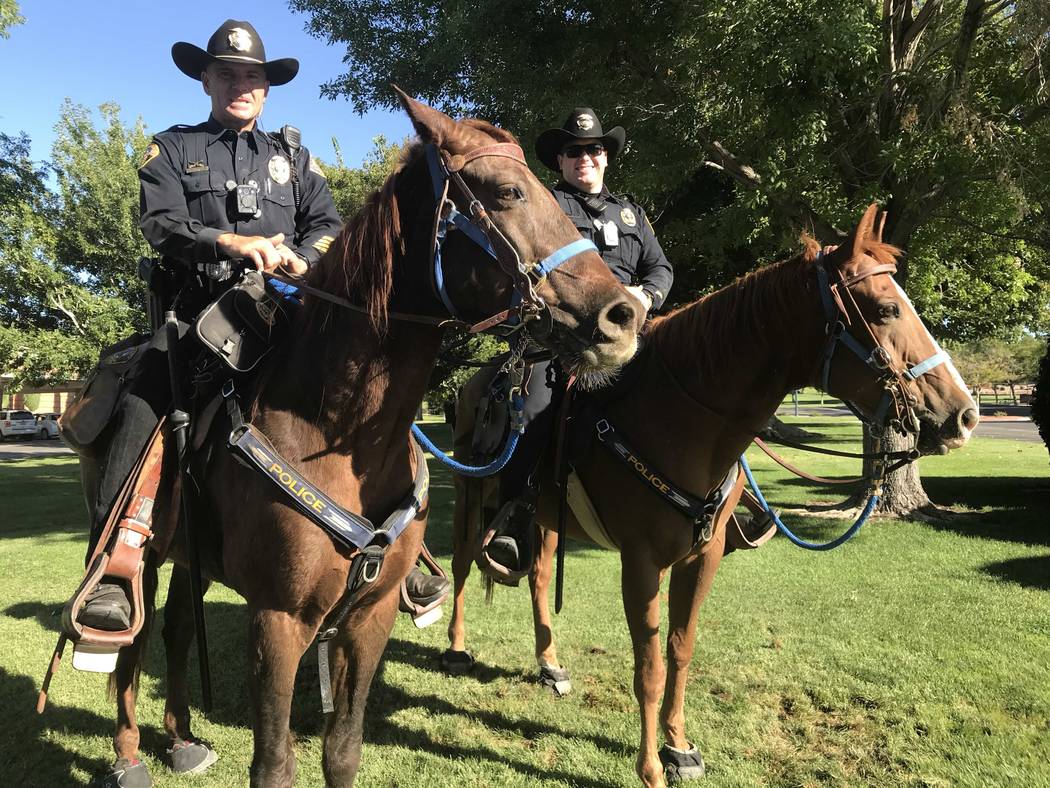 Boulder City Police Department is building its bond with community residents one whinny at a time.

Through its newly expanded mounted unit, the department has increased its presence in town while creating a more positive police experience.

Now staffed with two full-time officers, the mounted unit is starting regular patrols in the downtown area, primarily on weekends when there is more traffic and visitors, said original unit member and founder Scott Pastore.

He was recently joined by officer Guy Liedkie, who completed basic and advanced training and was certified through Metropolitan Police Department’s mounted unit.

“I love the animals and love police work,” Liedkie said.

He said it’s hard to describe the feeling he gets patrolling on horseback, but appreciates the visibility and bond its creates with community residents.

“When we’re up on the horses, kids especially, like to approach us,” he said.

This is especially helpful when they have to go out in crisis situations. People feel more comfortable dealing with the officers when they have met them under happier circumstances.

“It humanizes us as officers. It’s a great way for the community and officers to connect.”

Before joining BCPD about nine months ago, Liedkie worked with the Nevada Highway Patrol. He also worked for a sheriff’s department in Washington, where he first became acquainted with mounted units.

“I found a home in Boulder City,” said Liedkie, an eight-year veteran of police work.

He said he appreciates the groundwork Pastore did in establishing the mounted unit and the legacy he is helping build.

Pastore, on his horse Odie, was the sole mounted unit officer when it debuted in July 2017.

Being on horseback doesn’t hinder their ability to patrol and Pastore said they can perform the same duties as if they were in patrol vehicles.

“We can issue parking tickets from our horses, and have,” he said.

Instead, their mobility has become an asset for the department.

“The mounted unit not only gives us a way to reach even the most remote, inaccessible areas, they are also a very visible symbol that represents our way of life here in Boulder City,” said Chief of Police Tim Shea. “The horses invite positive interactions between the public and our deputies that are just not possible in a patrol car, which, from my point of view, is something we always want to encourage.”

“We can get through crowds better,” Pastore noted. “We want the public to know that the mounted unit is more than just show. As we proved at the recent July 4 celebration at Vet(erans Memorial) park, the mounted unit was invaluable. We responded to six calls for service in which we were able to get to incidents more quickly than officers on foot, in patrol vehicles or golf carts. Not to mention the visibility high above the crowd made people aware that law enforcement was close by and we had a clear view across the festivities.”

Pastore said the downtown patrols also boost the city’s small-town feel. He said he feels it will help attract people to the area and benefit local businesses.

At the beginning of September, the mounted unit also started “quality of life” patrols in the desert areas surrounding town. Pastore said that makes sure those living in the desert have not become ill or dehydrated as well obey the city’s camping and littering laws.

The unit also is patrolling local parks and bike paths.

“It makes them feel good to see us out patrolling,” Pastore said. “And it’s nice being on horseback because it’s more natural.”

Additionally, the unit will continue to work at special events in Boulder City, such as the coming National Night Out and Art in the Park, as well as parades. It also will assist Metropolitan Police Department as needed and will be at the Life is Beautiful festival in Las Vegas this weekend.

Together, the mounted units have 11 horses and 15 officers.

In addition to Pastore and Liedkie, the local unit is assisted by reserve officers Shon Johanson, Megan Kincheloe and Anil Sharma, who all recently completed basic and advanced training.

“It gives me the ability to do more and have a partner at all times to accomplish some of our goals with the unit,” Pastore said of the additional officer and reserves.

Odie has been the unit’s main horse for the past three years. Recently, they added Buck, who was donated by a family from Northern California where he had been a jumper competitor; Waylon, who came from a ranch in Arizona; and Star, a former barrel racing horse.

Pastore and Liedkie devote about 10 extra hours a week continuing to train their horses, along with the time needed for their regular care and maintenance.

“This is far from just a hobby,” Pastore said.

All of the expenses associated with the mounted unit are paid for by the officers or through fundraising efforts by the Friends of the Boulder City Police Department Mounted Unit, which has a Facebook page.

Equipment for the unit has been donated to the department by Metro, which obtained newer saddles and saddlebags. In all, nine saddles, police breast collars, hoof boots, saddle pads, six mounted patrol helmets and more were donated, he said.

In addition to his work with BCPD, Pastore has become a certified mounted unit trainer for Metropolitan Police Department.