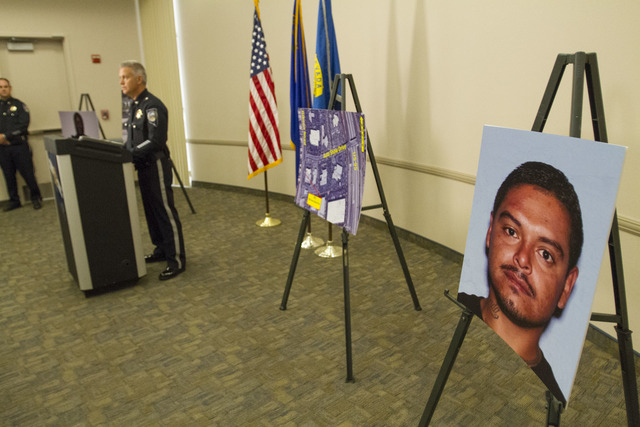 File A photo of Javier Munoz, 28, is shown during a news conference at the Nevada Highway Patrol Southern Command Headquarters in Las Vegas on Oct. 25. Munoz was shot Oct. 19, and died the next day. Munoz was arrested in Boulder City on Oct. 18 but was released to the hospital without being charged. 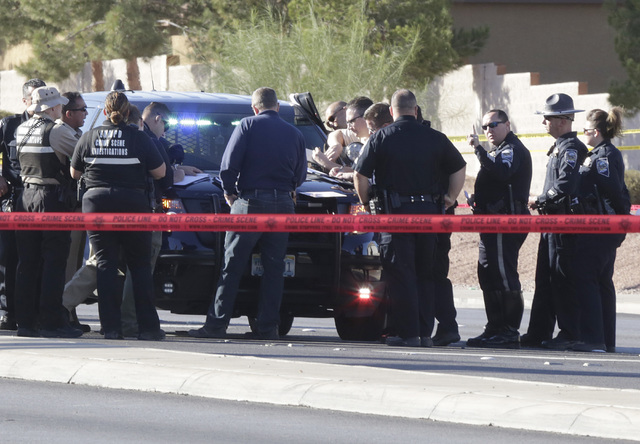 File Police investigate an officer-involved shooting after a Nevada Highway Patrol trooper fatally shot Javier Munoz of Arizona on Oct. 19 after a car chase in Henderson.

After a review hearing on Monday, there are still more questions than answers about the October arrest and death of Javier Munoz of Arizona.

The district attorney’s office preliminarily ruled the shooting as justified, and the hearing was held to release information about it to the public.

A prominent question was why 28-year-old Munoz was released from Boulder City Police custody the day before he was fatally shot by a highway patrol trooper during an attempted carjacking.

At the hearing, Las Vegas defense attorney and victim advocate Carl Arnold asked it on behalf of the Munoz family.

Detective Joe Patton of the Metropolitan Police Department said he did not have an answer for that question. Patton is on the team that investigates police shootings and spoke at Monday’s hearing.

Requests by the Boulder City Review to Boulder City Police Department for that information have been deferred to the city’s public information officer, who said the matter was being looked into.

Nevada Highway Patrol Trooper David Dudley fatally shot Munoz on Oct. 19 following a miles-long pursuit, carjacking and assault at the Findlay Cadillac dealership in Henderson. Prior to those events, he punched a woman at a gas station on Fremont Street and stole her car.

At the dealership, Munoz put the stolen car in reverse, and Dudley fired one round at him, as he was afraid the carjacking victim was still on the ground behind the car, Patton said.

The round struck Munoz in the abdomen and he died at Sunrise Hospital and Medical Center the next day. It was determined by the medical examiner that he had methamphetamine, marijuana and fentanyl in his system when he died, Patton added.

On Oct. 18, Munoz was arrested by Boulder City Police, which planned to charge him on four offenses: felony evading of a police officer, possession of stolen motor vehicle, DUI and reckless driving in a school zone.

According to Boulder City police records, Munoz was talking very fast and acting paranoid when he was arrested by officers. He asked the officers why they were chasing him and that he wanted them to shoot him. His eyes were described as “wide open with a wild look,” bloodshot, and his pupils were extremely dilated. He told officers he had taken spice, meth, marijuana and ecstasy.

Munoz was transported to Boulder City Hospital for treatment and evaluation. While there, he yelled and would ask the doctor if he was going to die. He also asked the officer to shoot him in the head. He was then sedated and unable to consent to a blood draw. After attaining the search warrant affidavit to draw his blood, a lab tech drew two vials of it.

The records show he was then released to the custody of the Boulder City Hospital because he was under the influence of controlled substances, as well as the fact he was going to be transferred to Valley Hospital in Las Vegas for further treatment. The doctor said he could be in the hospital for a few days.

Boulder City Hospital CEO Tom Maher said Munoz was transferred to Valley Hospital in Las Vegas because he had medical issues that his hospital could not meet.

Neither he nor chief nursing officer, Andre Pastian, said this week they had any recollection as to what those medical issues were.

In terms of releasing someone to the custody of the hospital, Maher said they had not experienced that type of situation before. Usually police officers bring someone to the hospital for a Legal 2000, which is a hold issued when someone is considered a danger to himself or others. A person can be held up to 72 hours for psychiatric evaluation under it.

Boulder City Hospital does have mental health services and personnel who can make that decision.

Certain licensed personnel — physicians, psychiatrists, licensed clinical social workers and nurse practitioners — can release someone not meeting the criteria for a Legal 2000. If a nurse makes the recommendation, a doctor still has to make the call on whether to release the patient.

Munoz checked himself out of Valley Hospital the night of Oct. 18, and carjacked the woman in Las Vegas early the next morning, Patton said.

Once he was released from Valley, Boulder City Hospital notified the police department, according to Maher in November. It is still unclear how much time elapsed from his release to the fatal carjacking in Henderson.