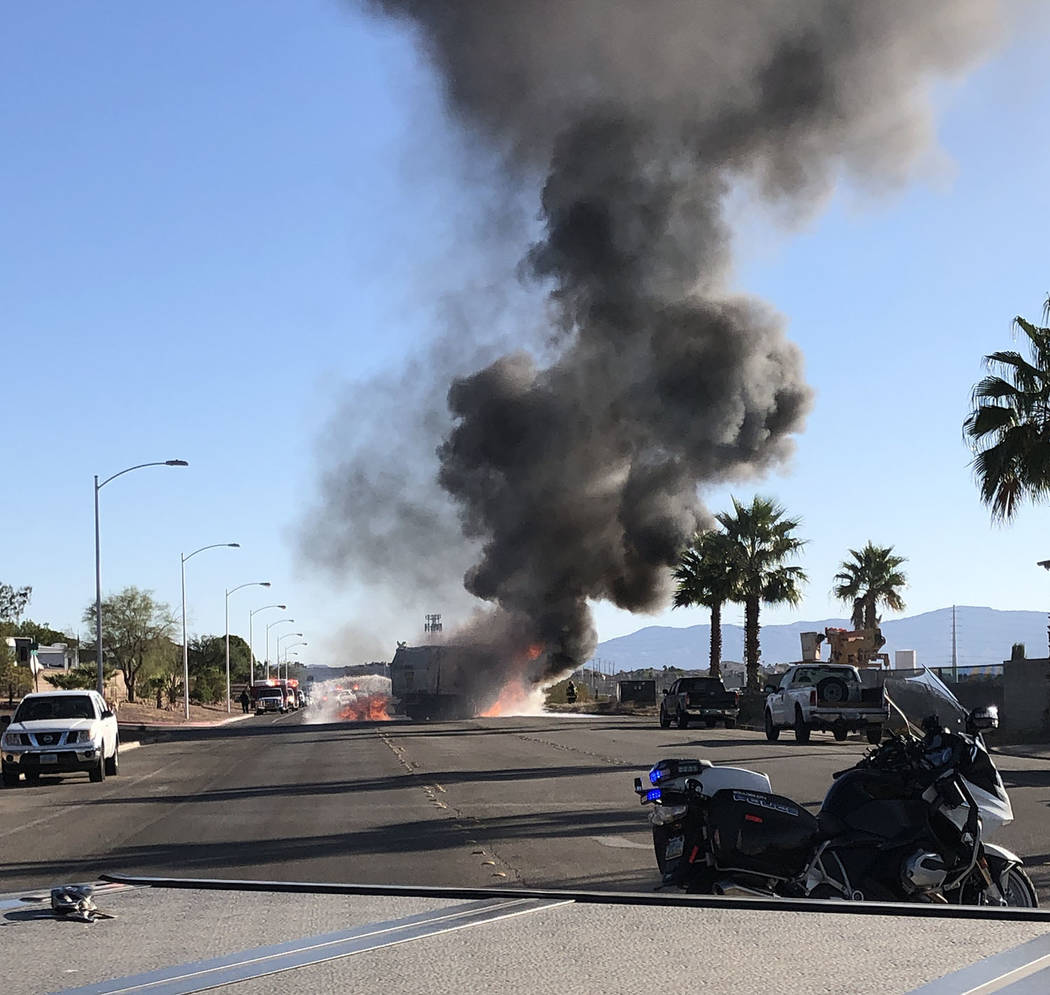 (Boulder City Police Department) A Boulder City Disposal trash truck caught on fire around 8:30 a.m. Tuesday, Oct. 8, near the intersection of Industrial and Wells roads creating a large plume of black smoke and causing a loud explosion. No one was injured and a crew that included Interim Chief Steve Walton remained on the scene for a couple of hours to clean up a minor fuel spill. Jim Ferrence of Boulder City Disposal said there was no disruption to service and the fire was likely caused by hydraulic fluid leaking into the engine's electrical system.

Officers received a report about a trash truck that was on fire near a fuel tank. Two minutes later, everyone was out of the area. Almost 20 minutes later, the fire was out.

Someone called the police and reported that a man and woman were on the side of the road. The caller said the man had the woman backed up against the windshield of her vehicle and was yelling at her. Officers responded, and they both said the man had been trying to give the woman a hug and she didn’t want one.

Officers received a report of a man who was in the bushes near a hotel. He was boxing, twirling around and acting suspicious.

A woman called the police and said a former neighbor had tried to run her husband over. Officers advised them about a temporary protective order.

A man flagged down police officers and told them he was having a heart attack. Almost 20 minutes later he told them and the medical crew that he did not want any more help, and he left the scene.

Officers responded to a report of electrical wires that were on the ground and sparking near a garage. The police contacted the electrical department, which agreed to send someone out.

Someone called the police and said a man was chasing an employee and “urinating everywhere.” Officers responded and determined the subject was getting gas and was with two other people. They suspected the person driving the car was drunk.

A woman called the police and said her 11-year-old son was missing. He had been seen around 2:30 that afternoon. His siblings said he went to the park and hadn’t been seen since. Officers looked at the different parks in town and businesses but could not locate him.

Officers received a report that some sheep tried to cross U.S. Highway 93. The caller was afraid they would get hurt and said one of them “dashed across” and stopped traffic.

Dispatch received three 911 calls from a toddler. They spoke with the mother and advised her to move her phone out of reach of the child.

A man called the police and said his ex-girlfriend took one of his chicken coops. She was still there, and the man said he was blocking her and her vehicle in so she couldn’t leave. About 30 minutes later, he received his chicken coop from her as well as a handgun.

Someone called the police and said two shots had been fired. The caller also said there was a man was wearing a hat who was headed down the street. Officers tried to locate the man but could not find the him.

A woman called the police and said her purse was empty. She said she thought someone had broken in. Officers responded and were able to locate her purse with all of her items in it. She had been looking through a different purse.

Officers responded to a report of a man who was sitting on the ground and had Cheetos all around him. His shoes were off, and he was cutting his toenails. Officers told him to leave the premises as the owner did not want him trespassed.

Someone called the police and said there was a dog in the area that was chasing rabbits. Officers responded and were able to get the dog and took it to animal control.

Officers responded to a report of a man who was sleeping in a sleeping bag on a sidewalk. The man was wanted by the Metropolitan Police Department, and Boulder City officers transferred him to its custody.

Someone called and said some children were being disrespectful by throwing things at cars and threatening to slice tires. One of them had dropped a cellphone in a neighbor’s yard, and the caller wasn’t giving it back until the police came.