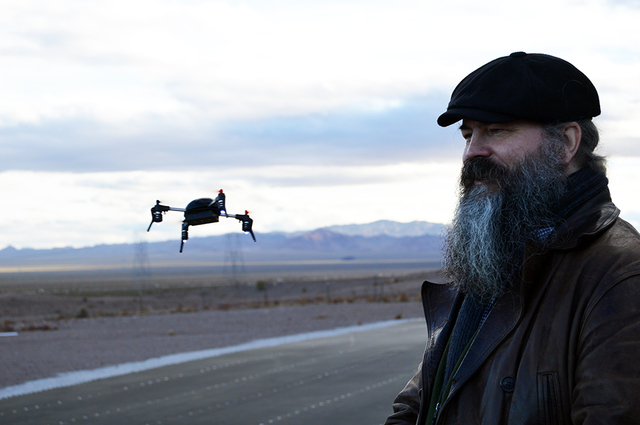 Max Lancaster/Boulder City Review Scott Stevenson of London-based drone company Extreme Fliers smiles as he flies the Micro Drone 3.0 at the Drone Rodeo at the Eldorado Droneport on Jan. 4. The Micro Drone is one of the smallest drones on the market.

Courtesy The plan for the 50-acre Eldorado Droneport, as seen in this rendering, will include office space that can be leased and pads for building.

Courtesy This rendering by DLR Group shows what the permanent facility at the Eldorado Droneport will look like. 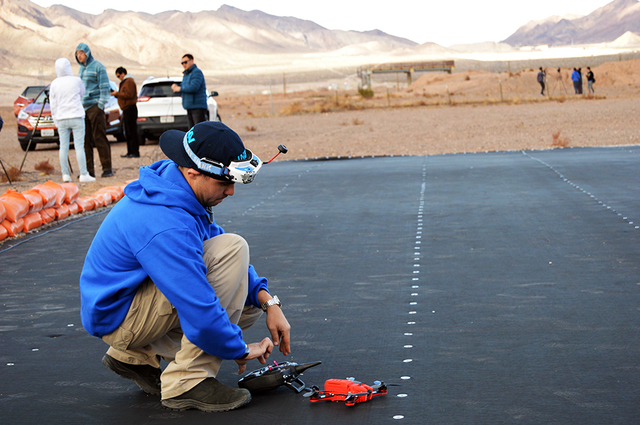 Max Lancaster/Boulder City Review Paul Beaur of drone company UVIFY adjusts the settings on its newest product, the Dracho Racing Drone, at the Eldorado Droneport on Jan. 4. Beaur and his company were at the port for the Drone Rodeo, an outdoor event for UAV companies to show off their latest products. 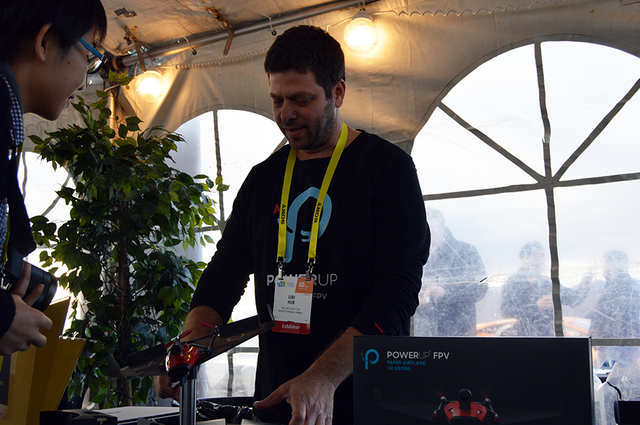 Drone companies from around the world gathered at the Eldorado Droneport in the Eldorado Valley for the Drone Rodeo on Wednesday.

The event featured over 13 drone companies showing off their latest inventions in the world of unmanned aerial vehicles.

The rodeo was the first big event for the droneport, operated by Aerodrome, which used the increased attendance from people who were in the area to attend the CES show in Las Vegas to unveil future plans for buildings and runways that will serve as the central hub for all things UAV.

“We want to be the main area for drone technology,” said Aerodrome Chief Financial Officer John Beneventi. “Millions of people use drones every day for recreational and professional purposes and we need to put the puzzle pieces into place to bring them together.”

Aerodrome is creating the commercial droneport along with a teaching facility at the Boulder City site.

The design concepts for the project were created by DLR Group architect Christopher Bell, who said the droneport’s design is not comparable to anything else.

“There is no road map for what this building should be; it is a first-of-a-kind facility. It has to be invented, and that is a daunting, and thrilling, challenge. We are so thankful to Aerodrome for this once-in-a-lifetime opportunity,” Bell said as he expanded on the building’s design. “The building is designed as a geometric white cloud that hovers over the sand. It is futuristic and lightweight like the unmanned vehicles it supports.”

City Manager David Fraser was at the event and he said that the city’s partnership with Aerodrome was an innovative way to counteract negative effects of Interstate 11.

“I think what Boulder City and Aerodrome are doing is a very bold move,” Fraser said. “We can’t stand still and partnerships like this will be integral in creating new revenue for the city while keeping our small town small.”

Aerodrome currently leases 5 acres of land for the droneport for $35,000 a year, according to Fraser. The city and the company are working on a deal to lease the other 45 acres.

Companies at the event talked about the importance and need for the droneport.

“Drone use is expanding in so many professional and recreational markets that it only makes sense to start treating it like the important industry it is,” Atlanta Drone Group CEO Matt Sloane said. “The droneport just shows that our industry is moving forward.”

Scott Stevenson, a representative for London-based company Extreme Fliers, talked about the inevitability of the droneport as he flew his company’s newest product, the Micro Drone 3.0, a tiny UAV that he claims can be used for anything from racing to shooting high-end videos.

“The industry was just getting really big so it made sense to create a designated area for all types of drones to be flown,” Stevenson said as the tiny drone buzzed around his head. “We have seen a lot of changes over the last couple of years like the FAA regulations so I knew we would be seeing an airport for drones. I just didn’t think it would be in the works right now.”

Stevenson is referring to the Federal Aviation Administration’s drone regulations that were released last summer.

Beneventi said that he hopes the droneport would be completed in three to four years; however, he could not elaborate on how big he expects the market to be for the facility.

“The industry still has so much more growing to do. The question will be how many businesses want to relocate to the port or conduct training here,” Beneventi said. “I honestly don’t know how high the ceiling is on this one.”