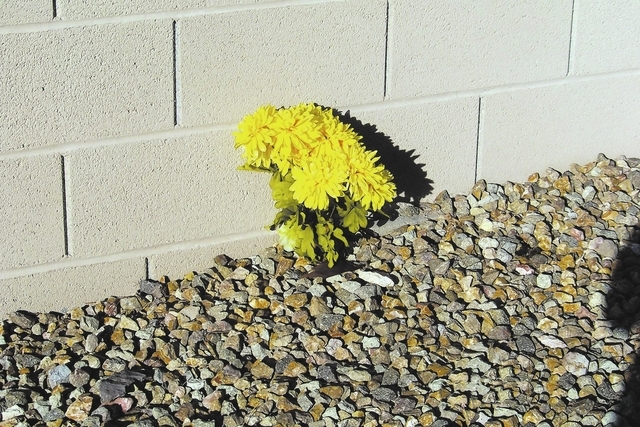 Three separate incidents of pit bulls attacking dogs and/or humans have taken place in Boulder City since Aug. 27, according to police.

The first happened when resident Mary Thompson and her dog, Maggie Mae, were walking on Gingerwood Street. The two finished their usual walk through the Gingerwood Mobile Home Park, where Thompson lives, and began the last portion of their nightly routine.

Thompson related the tale of the attack on Maggie Mae that resulted in the pet’s death.

“We were just strolling,” Thompson said. “The dog came charging.”

Thompson, who uses a wheelchair when she walks her pet, said she didn’t pay attention to the dog she saw running because she and Maggie Mae were walking in the opposite direction. Suddenly, Thompson heard the running dog’s “toenails on the sidewalk, just running as fast as he could. He had her (Maggie Mae) so fast. He threw her like a rag mop.”

Thompson attempted to fight off the dog and sustained injuries on her arms and hands for which she was treated at the Boulder City Hospital Emergency Room.

During the attack, Thompson was able to lift Maggie Mae onto the wheelchair but the pit bull went around the side of the chair and attacked Maggie Mae again, ultimately killing her.

Thompson said she was in shock but began screaming for help, and a number of drivers came to her aid. Two separate calls were made to 911 by women who were driving down Gingerwood Street and saw the attack, Thompson said. Another woman brought towels from her car, and another brought blankets.

Yet, it was only when another good Samaritan brought bottles of ice water and poured them on the pit bull that the attack stopped, Thompson said.

When the attack was over, an unidentified man at the scene pulled a cable from his car and placed it around the pit bull’s neck to hold him down, Thompson said.

“I’ve walked that dog for five years,” in the same area and nothing has ever happened, Thompson said.

The scene was so bloody that the police officer responding to the call told Thompson he had never seen “anything so horrific.” The pit bull was taken from the scene by the officer.

Although she lost Maggie Mae in the attack, Thompson said, “I don’t blame the dog. I want you to know that. It’s not the dog. It’s the owner.”

“Everybody in the trailer park has been really upset,” Thompson said, because many of its residents walk their dogs along Gingerwood Street in the area where Maggie Mae was killed.

Concerned for her health, Thompson spoke with Mary Joe Frazier, animal control supervisor, who told Thompson the attack dog was “perfectly healthy” and Thompson need not worry about being infected from the attack.

Frazier confirmed that the dog that killed Thompson’s pet was euthanized after being kept at the animal shelter for the required 10-day period.

On August 31, a second dog attack involving a pit bull and an unidentified breed took place. The pit bull was unleashed and attacked a passing dog. The dog’s owner, who tried to stop the attack, was bitten, according to Police Chief Bill Conger.

In that case, the victim did not call the police department until at least 90 minutes after the incident occurred.

On Sept. 2, the owner of a pit bull was attacked by her pet while in her home. Conger did not have additional details of the incidents available during the interview.

Frazier was unable to release any of the names of the dog owners involved in the three attacks, stating the names of owners and victims are not public information.

Conger spoke seriously about responsible pet owners and the value of keeping pets on a leash.

“People think because their dog walks with them, it’s under control. That is not the case unless the dog is a very trained animal,” because the slightest incident or factor could trigger a dog attack, Conger said.

A dog owner himself, Conger said his three dogs “don’t ever” go outside without a leash.

Conger said he was bitten by dogs twice in his life. Both animals were unleashed and both owners told him their pets had never bitten anyone before.

Although Conger spoke about the groups of dog owners and their well-behaved pets who frequent Boulder City parks, he said just because there are usually no problems, “that isn’t to say they’re going to do it all the time.”

He advised residents not to interfere between a dog and its master. “People will get themselves in trouble because other people are very protective of their animals.”

“If you see a dog doing something,” Conger said, “and you say something to that owner, you’re going to precipitate a problem. Call animal control. That’s the best thing they can do. Call the police department. People will start a problem over animals as fast as they will over their kids.”

The police chief’s take on the recent attacks is, “If you don’t have an owner who is taking care of his dog, that’s a problem.”

Reporter Rose Ann Miele can be reached at roseannrab@hotmail.com