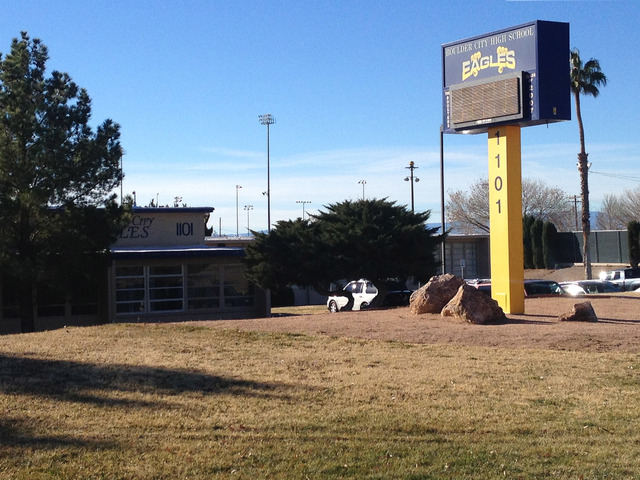 A local woman upset with the upcoming demolition of the 66-year-old Boulder City High School has recently circulated a petition rallying against the changes.

Tisha Chapwin has only lived in Boulder City for two years, but when she heard that the high school would be torn down to make room for a new one, she took to her computer and started an online petition against the changes. The petition, which launched Friday night, has garnered nearly 1,000 signatures for those in favor of keeping the school and making upgrades to the existing structures.

“There are so many people who have memories here, three and four generations who have been through this school,” she said. “We moved here because we love the charm of the city. It seems so homey here. Why change that?”

Overcrowded classrooms at the new high school have been a central concern for several teachers, as the new classrooms will be smaller than the current ones.

City Councilman Cam Walker, who has led the charge to acquire the funding for a new high school from the Clark County School District, said the teachers’ previous claim that the new school would not have natural light was false.

“The most important thing is that there are more windows in this new rendering than I think people expected,” he said.

Although it will be debated for the next couple of months, Walker said the current design shows each classroom having nine windows. The windows will be slightly above eye level, and Walker has told the architects that they want to incorporate the historical elements of Boulder City into the new design.

He encouraged everybody to view the proposed design inside City Hall, and he also noted that the Clark County School District had determined that the current school was no longer salvageable about a decade ago.

“Let’s have facts and professionals to help us make decisions,” he said.

But the school district still controls the size of the classrooms, according to Mark McGinty of SH Architecture, which is leading the design process of the new school. He said a classroom in Boulder City will look the same as a classroom in any other part of the district because of a design guideline the district has for all its schools.

“If you’re teaching math in Moapa or Laughlin and you’re in a modern school, they should be the same rooms,” McGinty said. “But the configuration of the entire outside of the school could be 100 percent different.”

But Walker said that may not be the case for Boulder City since some of its rooms have multiple uses. He said the size of some classrooms will be tailored toward each need depending on its use.

McGinty said outside alterations can be made to give the school a more historical feel, but all changes must be considered with the budget in mind.

“CCSD has instructed us that everything is on the table,” McGinty said.

Even with the news of windows and updated infrastructure, longtime teacher Bill Strachan said it still isn’t enough. The reduction in classroom size is still his biggest worry.

He said his current classroom is about 1,100 square feet. The average size of a high school classroom in Clark County is 890 square feet, according to the district’s standard for design.

“The atmosphere in a classroom is very important to how students learn,” Strachan said. “The short way to put this is that we have the best classrooms in the district. I think that’s part of why we have the test results we have.

“Why can’t we fix what’s here? Nobody is showing us any numbers that’s convincing us that (tearing it down) is the best way to go. I’m sorry. I’m not buying it.”

Chapwin said former students and teachers of Boulder City High School, including some from Florida and New York, have signed her petition. Although the new school will attempt to cater to the city’s historic features, it’s the demolition of the original school that isn’t sitting well with the petitioners.

“Most of the schools around town all look the same. Boulder City is about history and charm,” Chapwin said. “There’s a way of bringing charm to the new structure, but we love this school.”

Walker said safety was another point of emphasis when it came to the remodel. The school has 57 points of access, and the new school will have significantly less entries.

“We want more elements that make it more community, not cookie cutter over the hill,” Walker said. “The architect is charged with taking into account our heritage and our community.”

Strachan said there are ways to make the school safer without tearing it down.

“Raze some walls, take out some doors, limit the access points. That’s fine. But why tear down the whole building to make those things happen?”

The school’s older structure has caused problems for teachers, including the loss of air conditioning during the beginning of the school year that forced some teachers to take their classes outside.

The school also still operates on a two-pipe system, which prohibits the availability of heat and air conditioning simultaneously.

Although no design is set in stone, McGinty said he and his group will take many requests into consideration before they put together a final plan by the end of March.

Walker said he encourages public involvement and input, because the new school will be in Boulder City for at least another 50 years. He wants to hold a meeting in the upcoming months to answer questions and concerns, but said he would prefer to wait until civil and structural engineers are available to help.

“As we get feedback from all the stakeholders, then we’ll go forward,” McGinty said. “But it’s still too early in the process.”

Chapwin said she will speak to the School Board about the petition during its 4 p.m. meeting today at the Greer Education Center, 2832 E. Flamingo Road, Las Vegas.