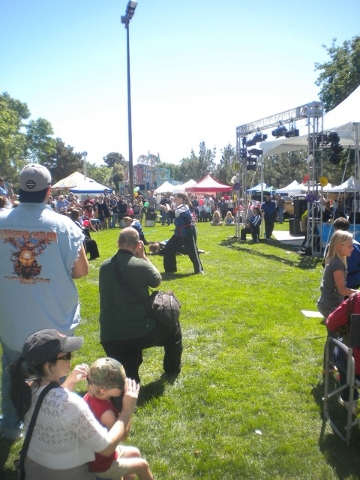 Fun, festive and free. This weekend’s Spring Jamboree presented by the Boulder City Chamber of Commerce is just one in a calendar-filling annual schedule of community events that make Boulder City a unique place.

Although it may seem that the events run flawlessly and effortlessly, months of planning and behind-the-scenes work are required, no matter how big or small. And although no admission is charged for many events, the sponsors are spending hundreds of dollars to make them happen.

There are costs for water, power, custodial crews, restroom use and the staff to ensure that things function properly. There are fees for facility rental, use permits, temporary business licenses and health permits.

Organizers also must pay for a police presence to keep things peaceful and often for road signs and barricades or fencing.

According to chamber Executive Director Jill Rowland-Lagan, the purpose of many community events — especially those presented by the chamber — is to attract residents and visitors to Boulder City.

The Spring Jam is the chamber’s only fundraiser, with proceeds used to pay for other events, including the Christmas parade and free movies in the park during the summer, Rowland-Lagan said.

“We need community support so we can continue the events,” she said.

“If the cost are not recouped, those events have to go away,” Rowland-Lagan said. “We don’t have the luxury of an event center, so there’s no gate fee to help recoup our costs.”

Smaller, nonprofit groups are especially challenged by the required fees, she added.

The nonprofit, community-service organization is responsible for the annual Wurstfest, its only fundraiser. It raises enough money to underwrite the all-night graduation party for Boulder City High School seniors and for donations to charitable causes throughout the year. However, rising costs affect what the club is able to accomplish each year.

“It hasn’t really impacted us (in presenting the event) but it does shrink the bottom line a bit,” he said.

Cook said if costs rise so significantly that the number of events are reduced, he expects it to hurt area businesses that rely on tourists.

Christy Springgate-Hill, who is on the board of several groups and helps others organize and work at community events, said she is frustrated with the rising costs.

She cited the Friends of the Arts, which would have incurred $800 in permit fees and staffing if it had chosen to serve beer and wine at last month’s Fine Arts Festival in Bicentennial Park. Last year, alcohol sales only totaled $600.

“We asked for a variance and were turned down,” she said. “If you look at the type of people who attend, this is not a party atmosphere.”

She encountered a similar situation when organizing this year’s community yard sale. The fees to Boulder City Police Department to pay for off-duty police officers and to obtain permits to sell beer in cans would have been around $600. In 2013, only $150 worth of beer was sold.

As of now, the Friends of the Arts’ free summer concerts in the park are on hiatus until the group determines if there is a way to present them without incurring major expenses.

“We do sell popcorn and water, collect donations and rely on grants, but those are getting harder to get and more groups are asking for them,” Springgate-Hill said. “We need other resources. We have gotten creative on some of them (events), but it’s not that easy.”

Typical costs that could be incurred by event organizers include facility-use fees, which start at $20 and can top $8,400; road blocks and barricades, $400; park restroom use, $100 per day; portable restroom rentals, $75 or $100 (American with Disabilities Act compliant) per unit per day, plus $100 each for delivery and pick up and $25 per unit per day cleaning; and piggyback electrical boxes, $50 per unit.

These are in addition to the special-event permits that cost $25, temporary business license fees of $10 per day per vendor/concession and liquor license that is $15 for beer and wine or $50 for hard liquor.

The Southern Nevada Health District charges a minimum of $131 for any event where food or beverages will be sold. Additional costs are incurred if an event includes tastings.

Recently, Assembly Bill 286 was passed that requires a first aid station at special events in Clark County with at least 2,500 attendees. If 10,000 to 15,000 people are expected, an automated external defibrillator and roving emergency medical technician team must be on-site. For events with 15,000 to 50,000 people, the first aid station must have a nurse. Events with more than 50,000 attendees must have two first aid stations, two physicians, two roving EMTs and two ambulances.

Until recently, the Chamber of Commerce had a grant to underwrite those costs. Now, it will cost $50 per hour per officer, Rowland-Lagan said.

Springgate-Hill said another major expense is a $1 million insurance policy that names the city as an additional insured party.

Rowland-Lagan agreed that finding insurance is “one of the toughest things” for event organizers to obtain.

Part of that fee can be reduced if the chamber is involved as a presenter, allowing a group or organization to purchase a one-time rider for the function.

That, however, takes a toll on Rowland-Lagan, who must spend time working on the event.

“I’m hands-on so I know my insurance will cover it. If I’m not involved, I don’t want to take on the liability of extra insurance,” she said. “It makes for a lot of busy weekends.”

Some groups, such as Rotary, are able to use the organization’s insurance policy.

As the required fees add up, organizers also have to consider promotions and advertising in their budgets.

“Advertising is 75 percent of my budget,” Rowland-Lagan said. “If no one shows up, then there’s no value.”

For example, she said she expects to spend about $20,000 to advertise the Spring Jam. Rowland-Lagan said she typically reaches beyond the city’s borders to the Las Vegas Valley and Laughlin, and Bullhead City, Lake Havasu City and Kingman, Ariz.

Residents’ attendance was higher during the first two years of the recession, but as the economy improved Rowland-Lagan said she noticed fewer Boulder City people attending.

“As things get better, there are more events going on and people are drawn into Henderson and Las Vegas,” she said.

That also means there are fewer people to volunteer.

Springgate-Hill said there is usually three to six core people who spearhead each event, but many others are needed during the events to help out.

“We couldn’t do any of these events without volunteer help,” Rowland-Lagan said.

The costs are just part of the equation. Preparing and submitting all the necessary paperwork takes a great deal of time and energy.

Fortunately, Parks and Recreation Director Roger Hall has simplified the process for any event taking place in city-owned facilities.

“Once they contact our office to check (availability) for a location and file a facility-use form, I write a letter to the individual outlining the requirements,” he said.

The letter basically serves as a checklist for the event, he said. It includes information about all the permits needed and who to contact, fees and where to pay them, and items such as insurance requirements, who to call for road barricades and how to contact BC Waste Free to obtain recycling containers.

“We do try to make it easier for coordinators,” Hall said.

After 30 years with the city, helping with more than 80 events a year, Hall knows what it takes to keep things running smoothly.

“We know what to do to make sure things like the water coming on in the middle of a wedding or art show don’t happen,” he said.

Hall works with the city’s special-events committee that includes representatives from the public works, police and fire departments. The committee discusses issues that could create problems.

“Communication is the key to the whole thing,” he said.

Hall creates a folder for each event that contains copies of applications, letters, permits and other paperwork to keep everything running smoothly. He also keeps a list of things to address for the coming year.

“If it makes my list, it gets addressed in the letter so we can avoid any problems or issues,” Hall said.

Although the letter/checklist helps organizers know what needs to be done, it still involves “a lot of running around,” Springgate-Hill said. “The first time I went to the health district, I had to make 10 trips to get all my paperwork in order.”

Cook, who helped organize the recent Boulder City Beerfest, said although it took some time to file all the paperwork and pay the fees, it wasn’t too difficult because most city offices are within a block or two of each other.

“For the most part, all the government agencies were easy to work with. There was a little bit of running around, but from my experience, it doesn’t feel like a big hassle,” he said.

Even though the city offices are clustered, Springgate-Hill said it would be nice if there was one person who could coordinate all the paperwork and who would have up-to-date-forms and information.

Springgate-Hill knows firsthand how difficult that can be. Recently, she obtained what she thought was all the necessary paperwork for the health district and spent a week filling it out before driving into Las Vegas to file it. When she arrived, the paperwork was already out-of-date.

Although she acknowledges that’s not a common problem, it takes time and experience to learn what is needed.

“Every year I learn something, and I’ve been doing events all my life,” Rowland-Lagan said.