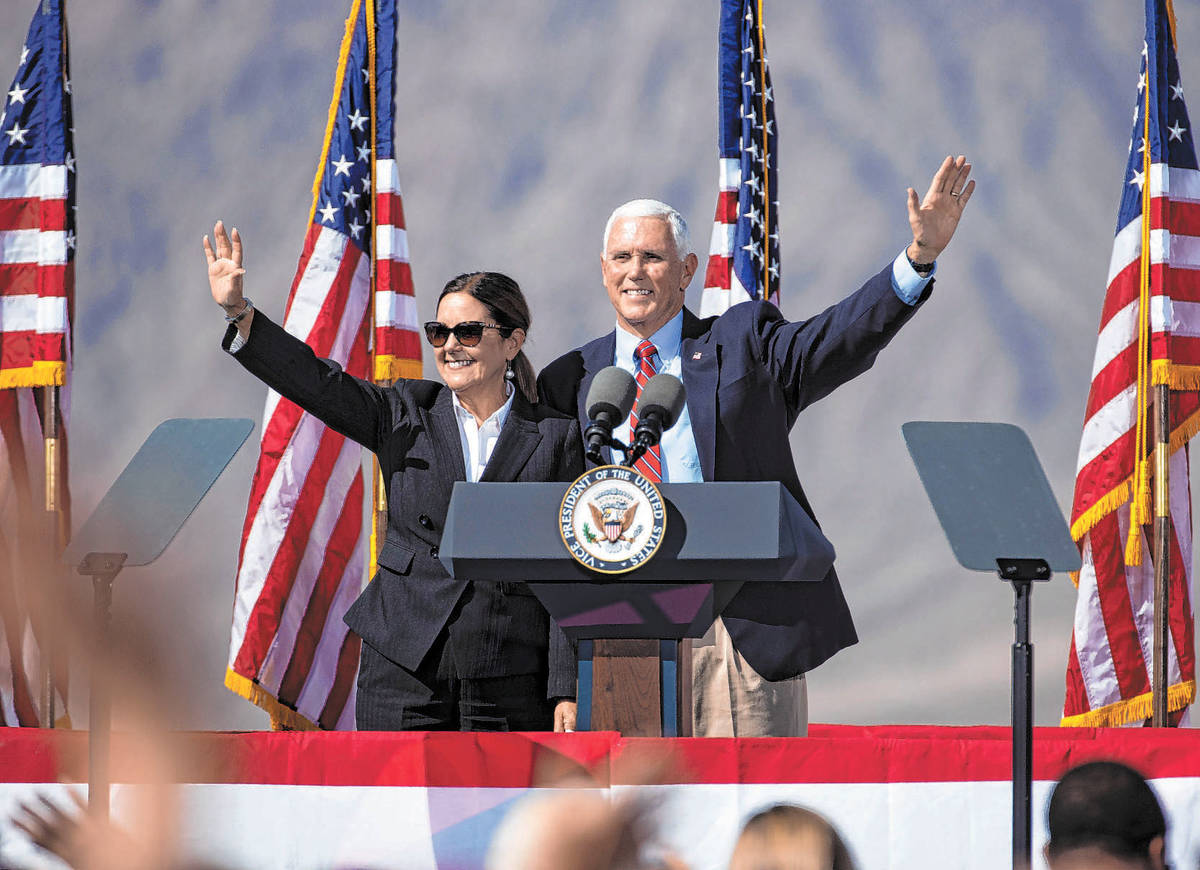 “We’re here for one reason and one reason only, and that is that Nevada and America need four more years of President Donald Trump in the White House,” Pence said to a crowd of a few hundred people assembled outdoors at the Boulder City Airport.

“We are 26 days from another great victory for the American people, and the road to victory runs right through Nevada,” Pence said.

Biden’s campaign has denied each of these claims save for the court additions, which Biden and Harris have declined to discuss in debates over the past few weeks. The number of Supreme Court justices is set by law, and any change would have to be approved by Congress before a president would be asked to sign or veto an expansion plan.

Pence came to Nevada fresh from his only debate against Harris, held Wednesday night in Salt Lake City. He noted political pundits spent the morning arguing over a victor, but he proclaimed Trump the winner.

He said Trump’s response to the COVID-19 pandemic, which has killed more than 200,000 people and leveled the American economy, “saved countless American lives.” He said Trump and first lady Melania Trump are recovering from their own coronavirus diagnoses.

“The medicine and care they received was part of a national response we’ve made available all across the country,” Pence said.

That response has been a key point of attack for Democrats, who argue the country’s large death toll when compared with others struck by the same pandemic is evidence of precisely the opposite.

The vice president also stressed the importance of flipping the Democratically controlled House and “retiring Nancy Pelosi once and for all,” to loud applause. He briefly praised Southern Nevada Republican congressional challengers Dan Rodimer and Jim Marchant.

Pence spoke for about 30 minutes after a brief introduction from his wife, second lady Karen Pence.

According to the city officials, campaign organizers agreed to cap the event at 250 people in compliance with the state’s public gathering rules during the COVID-19 pandemic. That cap appeared to be enforced, though social distancing and mask use were not consistent.

Pence encouraged those in attendance to rally the support of their neighbors for Trump, who lost the state to former Secretary of State Hillary Clinton by about 2 percentage points in 2016.

“There’s never been a day gone by when President Trump hasn’t gotten up and fought to keep the promises that he made to the people of Nevada,” Pence said. “Now it’s our turn to fight for him.”

In response to the event, several Democratic state legislators criticized Pence and the Trump campaign for hosting an in-person event during the pandemic.

“I am horrified by Mike Pence and this entire administration’s constant attempts to gaslight the American people and downplay the severity of this crisis,” said state Sen. Yvanna Cancela, also an adviser for Biden’s campaign.